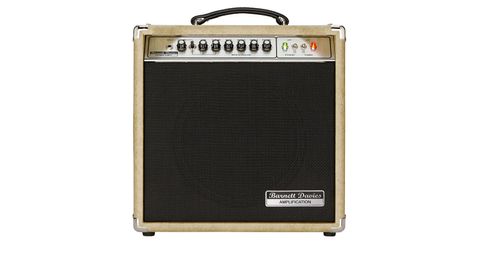 A finely-built Brit amp with workaday looks but purposeful tones and features.

Yet another new name to add to our list of British boutique builders, Barnett-Davies is based in East Sussex and its amp already has a list of dedicated fans that include Keane, who used two of them to amplify the piano on their Under The Iron Sea album.

This 15/30 combo is small, very portable, and very loud if needed, with a proper quad-EL84 power stage driving your choice of loudspeaker. The lightweight aluminium chassis encloses a hand-wired vintage eyelet board circuit that's built to last and uses very high-grade components.

There are two channels for clean and overdrive, which share a conventional three-band EQ, with global reverb level. Less conventional is the 15/30's ability to either swap between channels or run them both at the same time, adding considerably increased tonal range.

The reverb has a neat two-level preset arrangement with a second level control built into the footswitch, so rather than switching it off, you can choose to swap between two different level settings.

Overall, it's a very well-made small combo; we're not so sure about the ears that obscure the ends of the 45-degree control panel, which is otherwise easy to view, and the general styling may look a little dated, but none of that detracts from the high standard of build quality.

The Barnett-Davies is electrically very quiet, with very little hiss and hum. The clean channel's tone is pleasantly neutral, with a sweet treble, rounded bass and warm midrange, with an almost hi-fi clarity that turns into a sweet chiming overdriven edge as volume levels are cranked up.

The lead channel is warm and rounded in voice, although using brighter pickups yielded a potent balance of body and edge. This plumpish voicing may be down in part to the Celestion G12 Century not colouring the output as much as some other speakers would.

We tried a variety of guitars, including a 1972 Les Paul Custom, a PAF-loaded Les Paul Standard, an old Strat powered by Duncan Alnico Pro IIs, and a Fender Custom Shop Nocaster. Overall, we felt the best overdrive results came from the brighter PAF humbuckers, with the Nocaster's stunning bridge pickup coming a close second.

All the guitars we used sounded good through the clean channel, with the volume control set to around halfway to add a subtle bite. Most of the better sounds were found when using the Barnett-Davies' clever Combine function, which runs clean and overdrive simultaneously; and in the full-on 30-watt mode, which offers slightly better note definition at gig volume.

We'd like to hear this amp with a decent vintage alnico driver, such as Jensen's P12R, which has a distinctive edge that works well with EL84-based amps. There's plenty of volume on tap, and the 15/30's powerful dynamics ensure that you'll be heard, even in the half-power setting.

The vintage valve-powered transformer coupled reverb is smooth, warm and for the most part, noise-free, so you can use it for more extreme settings without excessive hum spoiling things; and the clever dual-level control is a nice touch, allowing you to go from a hint of ambience for rhythm work to full-on surf leads.

The rear-panel DI output also works well, putting a decent tone into the front of a mixing desk without the need for too much EQ.

The Barnett-Davies is a breath of fresh air from a British builder that clearly knows how to put a good circuit together. The styling may look a little dated, mostly because custom parts are out of the league of most small production builders, but overall we think Barnett-Davies does a great job with the parts it uses.

The price is pretty reasonable for a hand-built product, but the 15/30 faces some excellent, well-spec'd rivals at around this price. It does have a unique voice, however, as well as a useful if not exhaustive feature set. This is often the case for boutique amps, which are dialled into a specific tonal niche, rather than having to cover a wider base, like a mass-produced product.

The British boutique scene is booming, almost to the point of saturation (no pun intended) and it's nice to play an amp with its own vibe, rather than another Plexi/ Tweed clone. Definitely one to try.