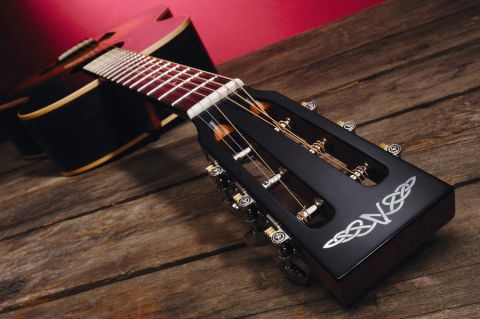 The S320A features a slot headstock.

Avalon's Americana guitars, as the name suggests, are aimed at evoking the aura of vintage US acoustics.

For this review, we're looking at the S320A Americana Concert model. This guitar was loosely described as a parlour guitar when it was first launched at Frankfurt, and indeed the company had prototyped a super-compact design.

In the event, though, Avalon decided to stick with the familiar 14.5in-wide 00-size concert-body format for the debut. Injecting a retro flavour into the instrument has involved more than simply applying a deep sunburst finish.

The neck is adapted from a 14- to 12-fret body join, accompanied by a slot headstock carrying appropriately vintage-like Grover Sta-tite open-back tuners.

The change to a 12-fret neck has meant rebracing the top and shifting the Martin-like pyramid-end bridge further back, where it now sits in the middle of the lower bouts, a positioning many people regard as where the sweet spot should be.

The only physical downside to this is that players whose technique involves resting the side of the hand on the bridge may find its more rearward location feels a little awkward at first. That, however, tends to go with the 12-fret territory whatever the size of instrument.

On a body of a premium grade sitka spruce top and rosewood back and sides, the cosmetics are tastefully simple. The sycamore binding adds rosewood purfling around the front, the same combination of woods being used for the soundhole rosette.

There was discussion that the rosette may be changed to mother-of-pearl, but it was felt that the wood inlaying looked more in keeping with the guitar's overall appearance.

A decision still to be made is whether to fit a rosewood or bone endpin as standard. While that small detail is being mulled over, our sample has no button, though customers can specify what they wish, including having a second one at the heel.

Up on the neck, meanwhile, the bound ebony fingerboard carries cut-diamond position markers and there's ebony facing for the headstocks.

The sunburst theme has prompted the introduction of an extra finishing process to the nitro-cellulose lacquering. On natural-finish Avalons, the final preparation involves hand-rubbing with fine-grit wet and dry, achieving a distinctive, much-admired soft-gloss look.

On the dark areas of the bursting, however, it was found on the first Americana samples that faint rubbing lines remained visible - black being, as we know, a relentlessly unforgiving colour for showing up the slightest mark.

What now happens is an additional rubbing back with finessing cream and even finer wet and dry (up to 4000 grit), which removes these lines whilst retaining a similar patina. Compared with an early S320A we saw, the difference is significant, and the finishing now looks in very fine fettle.

Like Lowden before it, Avalon is known for its lengthways laminated necks, and the S320A's is a three-piece all-mahogany sandwich, with the centre portion's grain rotated through roughly 90 degrees along its length for added stability.

In keeping with the fingerstyle appeal of the instrument, the neck is a semi-wide affair, 45mm across the nut, with a generous 57mm string spacing at the bridge.

Thanks to a moderate-depth profile it feels comfortable and accessible even for smaller-handed players and the smooth grip is enhanced by bevelling along the edges of the fingerboard, immaculately dressed fretting, and the gentle camber, which allows an excellent buzz-free set-up.

Anything much above the octave is off limits, but that's inherent to any non-cutaway 12-fretter.

Though not as warmly voiced as a previous S320A this reviewer has tried, it's a hugely enjoyable player.

The response is taut yet supply toned, there's volume aplenty considering the body size, and the sparkling clarity and precisely balanced articulation across the strings are impressive and so well suited to fingerstyle repertoires.

Add in an easy sustain and generous dynamics, and the result is a simply delightful picker.

Avalon is to be applauded for this Americana. You might think that the company has trodden a well-worn path down the heritage trail, and in one sense that is the case.

But along the way it has come up with an immensely attractive, generally great-sounding guitar that is instantly and distinctively identifiable.