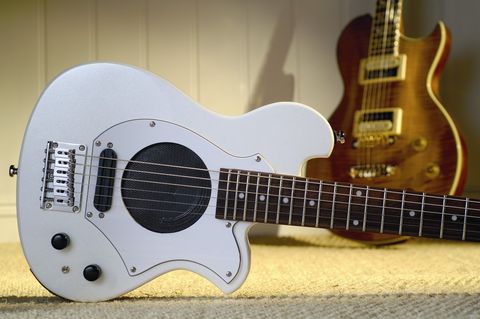 Here are two very different guitars that we can heartily recommend. The PE-Inspire comes with a price that allows us to ? nally heap unconditional praise on to a high-end Aria PE and, with a good spec and a fantastic tonal performance, it will have no trouble living up to its name. The AMG10 represents the end of your search for a travel guitar. If you have use for such a thing we strongly suggest you try one out, as there really aren't any major downsides to it whatsoever. Okay, so its tones aren't anything to write home about, but as we've said, that's of a secondary importance when you're on a beach, a train or even when the kids have gone to bed. It plays perfectly acceptably and has more than just one use, and in our ratings we've marked it accordingly. Gear snobs take note: even though it's never been away, Aria is back: and both of these great guitars deserve serious attention.

If classic models bearing the Gibson - or, indeed, Epiphone - logo fail to float your boat, or even if you're a Les Paul owner looking for something different, Aria has always been a brand worth considering.

Due to the widely reported shift in dollar to sterling pricing, models in the same quality brackets as a Les Paul Standard have actually been more expensive than their American rivals.

For example, the PE-Extreme is a lovely guitar but, at £2,100, who's going to choose it over either a classic Gibson or the new incarnation of the PRS Singlecut, when it re-emerges? And let's not even mention the doubtful resale value…

The whole concept of travel guitars can be a strange one unless you've been stuck away from a guitar for any length of time.

Two weeks on a beach with the wife may seem an idyllic proposition, but when you've gotta play, you've just gotta play and, as most Greek tavernas are unlikely to have a Strat and a Boogie rig in the back room, compromise is the key in order to slake those itchy fingers.

It's fair to say that the choice of travel guitars - always short scale and, in some cases, easily broken down into component parts - is fairly good these days, although in the majority of cases there tends to be something missing: amplification.

That's not the case with the AMG10. Aria's slant on the whole thing has included within the ergonomic alder body a four-inch speaker powered by an onboard amp, controlled by a volume and tone pot.

Juice comes from a standard nine-volt battery and you can turn the amp on by flicking a simple microswitch: no leads required.

This is all well and good, but this little beauty also allows you to use headphones or a guitar amp, thanks to its Aria OS-1 single-coil sized humbucker. You can also turn the amp on and off when silent widdling is the order of the day.

With a standard maple neck and rosewood board, the guitar features a 24-inch scale, which does allow for standard 440Hz tuning, and although the playability is unlikely to win awards, it's certainly more that good enough to let players of any standard do their stuff.

Again, as long as you don't expect too much in this area, it's unlikely that you'll be disappointed. The internal speaker is just fine and does distort the more volume you pack into it.

At its zenith you can obtain some lilting Sustainer-style feedback, although your holiday friends may ask you to turn it down after a minute or two. It's great for slide as well.

Obviously through a standard amp, the AMG10 is a little too harsh and flat when compared to models like the PE-Inspire, but then this isn't really the point of a travel guitar.

Stick on the headphones, keep the volume down, and you'll find any feelings of loss caused by enforced estrangement from your custom shop fender will vanish.