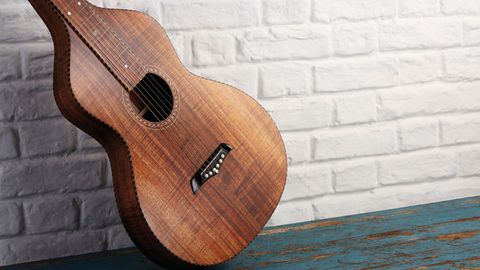 This is one of those guitars that will likely stay with its owner for a lifetime: a serious, elegant guitar for a Weissy or lap-style player in search of real authenticity.

Originating in Hawaii, lap-style guitar became increasingly popular in California during the early 20th century, progressing into styles of blues and roots music.

Commonly know as a 'Weissenborn' (which refers to Hermann Weissenborn, the renowned luthier of the instrument in the 1920s), this style of guitar has been relatively unheard of due to limited supply and the nature of its niche slide style. Until now, that is.

Dorset-based Anderwood Guitars founder, Ed Greenfield, has spent the past six years building up an impressive range of affordable lap guitars and has now opened the doors to his custom shop. Specialising in authentic, circa 1927, Weissenborn-style models, and with a build-to-order service, these guitars are replicated directly from their very own collection of vintage originals - right down to the very last detail.

But why go to the effort of exactly recreating a 1920s Weissenborn and what's so good about them? Well, an original Hermann Weissenborn-built guitar is as about as good as it gets in the world of acoustic lap-style instruments, and with such a limited number originally built they're extremely rare. Even if you are luckily enough to find one, condition can greatly vary, not to mention cost.

This Authentic Series c.1927 Style 3 is one of the most visually extravagant of the four models in the range. Constructed from hand-selected and beautifully figured sustainable koa from Hawaii, it's bound in a rosewood and holly rope design, with a matching inset rosette, and finished off with abalone markers.

The impact of the aesthetics and cosmetic detailing of the Style 3 remains in keeping with the original and, overall, it's very tastefully balanced.

As with the original spec, the Style 3's bracing and kerfed linings are spruce, it employs hide glue (correct for the period), and it's finished in nitrocellulose and hand-rubbed to a gloss lustre. The heavily black-stained bridge is actually maple, with a rolled aluminium saddle. Ivoroid bridge pins have been used to closely resemble a vintage model, too.

Tuners here are classic open-backed recreations of 1920s Waverleys, while the beautifully cut nut is made from ox bone. Finishing off with a respectful nod to Mr Weissenborn is a branded Anderwood logo visible through the soundhole. Nicely done.

As expected, measurements are true to an original: a 635mm (25-inch) scale length and neck width measurements of 48mm (nut) and 58mm (12th fret). Unlike many modern-day lap guitars with higher string heights, this original-style is much lower (only 5mm at the nut) and requires precise tonebar work to avoid hitting the fretboard and unwanted note selection.

Also true to the original, the hourglass-shaped body and hollow neck are constructed of solid koa, which creates a sweet-toned, full-bodied voice with sustain that never seems to end. There's a deep warmth to its bottom-end, too - especially highlighted when thumbpicked.

With a wide midrange and rounded treble, the overall sound of the Style 3's tone is full yet delicate. Suited to both fingerstyle and rootsy heavier strum work, the Anderwood sounds genuine, evocative and tonally emotive - a songwriter's dream!

There's nothing to fault here. If you're a serious lap-style player looking for a top-line instrument built to the highest standards that comes with that vintage tone, this is about as good as it gets.

As a UK-made, hand-built lap-guitar made with the finest woods, and so close to an original, it's modestly priced. Don't forget there are four standard model specs and a custom build-to-order service on offer, so there's plenty of choice. Oh, and a vintage-style hardshell case with brushed hardware is included in the price - especially welcome due to the nature of its unusual shape.