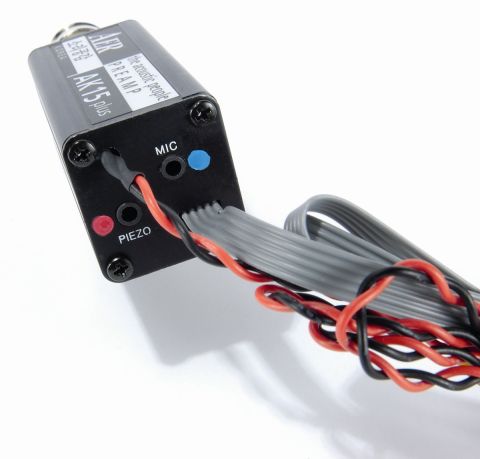 A simple and effective way to get the most out of your acoustic without sacrificing your guitar's body to nasty hole cutting.

The vast majority of electro-acoustic systems with onboard controls still involve a preamp mounted into the rim of the instrument.

In recent years, however, pickup manufacturers have begun offering systems that don't involve hacking a hole in the side of the guitar, something that's unlikely to do acoustic sound quality any favours.

The latest such product to hit the shops is AER's AK15-Plus, designed in Germany but made in Korea under a the AERKorea joint venture operation.

Like other non-invasive systems on the market, the AK15-Plus is a two-way blender package.

It comprises an under-saddle piezo pickup, plus an electret condenser mic housed within a small foam block that sits internally on the back of the instrument. The block is held in place by a Velcro strip.

The preamp, which incorporates trimpots for setting up the relative gains of the pickup and mic, is integrated into the endpin-cum-strap button and is powered by a 9V battery whose holder is mounted on the inner face of the neckblock.

The controls - two thumbwheels for volume and mic blend - sit discreetly on a small plate under the bass side of the soundhole and fall easily to hand.

It's important to stress that the system was supplied to us pre-fitted to a guitar - in this case a Norman B20 folk - so we didn't have to go through the procedure of installing it.

However, we've seen the installation manual and it provides comprehensive, illustrated instructions that a competent DIYer should be able to follow without too many problems.

As always, though, if in any doubt about your ability, get a professional guitar tech to do the job.

Fitting costs will vary, but £50 or thereabouts should be a typical outlay, assuming no mods are required to the guitar beforehand - like, for example, routing a deeper saddle slot.

The pickup itself is compatible for string spacings from 50mm to 62.5mm, which covers pretty much all acoustics, right up to an ultra-wide fingerstyle arrangement.

One installation variable is where exactly to locate the mic block. AER suggests the 'sweet spot' is approximately five centimetres from the treble side of the guitar, under the lateral line of the bridge.

Our Norman's was fitted slightly further forward than this, but that was dictated by the position of the back's central cross brace.

This will vary from instrument to instrument, so some experimentation may be required.

Another procedure to do before commissioning the system will be setting up the piezo and mic gains, whose trimpots each have four guide positions - zero, 1/3, 2/3 and full gain.

Doing this sounds fiddly, but it can fairly easily be done by having the endpin preamp out through the soundhole and connected to your amp, after everything else has been wired up.

Once the adjustments have been made, the strings can be loosened off and the preamp finally installed in the endblock.

The Norman has a quite warm acoustic tone, but this is the one area where the AK15-Plus is subversive in its personality.

The system's preset tone curve is voiced for a bright, crisp treble, and as a result the guitar loses some of its warmth, unless that's redressed with backline EQ adjustments.

In other respects, however, the AER performs impressively.

The sound is open, hi-fi-like and well integrated - both across the strings and between the two signal sources - and the mic side of things are a lot more user-friendly than any gooseneck-type system we've tried.

It progressively adds a more multi-dimensional, ambient character; plus subtly lending more low-end depth and richness, without the usual penalties of a squawky presence or undue proneness to feedback.

One minor downside is an increase in body microphony, but that's inevitable with any mic-loaded system.

The AK15-Plus represents extremely good value. It's significantly cheaper than some other manufacturers' blender systems, yet the quality is pretty much all one would expect from an exacting amp manufacturer like AER.

Even the enthusiastic top-end isn't necessarily a drawback: if sparkling clarity is part of your favoured sound, that's a bonus point too. Definitely one to try.