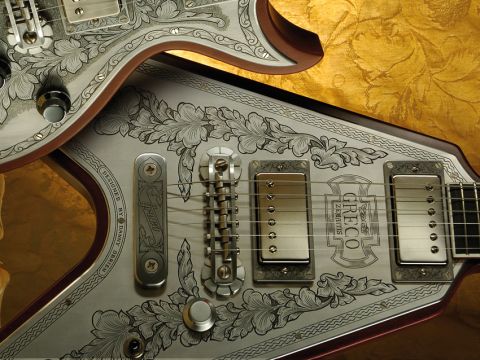 A looker for sure, this Greco is very nicely made, although lacking many original details. A lot of money for an all-mahogany V-style guitar.

How much? Yep, let's not beat about the bush, AC Zemaitis guitars do not fall into the cheap category - but they not only capture the style of the late and legendary Tony Zemaitis but, you've got to admit, they do look pretty cool, huh?

Looks were a crucial ingredient of the original Zemaitis guitars. They were primarily 'stage' guitars, meant to stand out from the crowd - something that the Metal Front, Pearl Front and Disc Front guitars, Zemaitis' best-known designs, certainly did.

A year after Zemaitis passed away in 2002 his wife and son made an agreement with the Japanese corporation Kanda Shokai to ensure the continuation of Zemaitis Guitars. The high-end AC Zemaitis guitars are made in small numbers in a Japanese custom shop; while these Greco versions, licensed from Zemaitis International, are more affordable and made in higher numbers.

At under half the price, the Greco V, initially at least, has the same 'wow' factor as the AC Zemaitis (apparently Tony did make a couple of V-style electrics in his time). There are many differences, however.

The 43mm thick body is two-piece, the neck one-piece. The head facing is rosewood, not ebony, and the head plates, while engraved, have more simple designs and they're actually nickel-plated. The alu top has a 'designed by Danny O'Brien' label and the centre of this plainer design states 'Greco Zemaitis' - the engraving is laser etched and hand-finished. The string anchor just states 'Greco' and the 'engraving' looks like it's painted, not engraved.

There's no top-arching either - the string anchor is designed to sit on a curve so there's a visible gap under it - and the finish, still natural satin (but not nitro), appears a little thicker around the similarly-styled neck-tobody joint. The fretboard is ebony - the frets sit over the binding but don't cut through it - and the neck shape, while very similar, isn't quite as careful, especially the bound edges, which feel more squared.

There's a 'Greco licensed by Zemaitis, Made in Japan' legend on the back of the headstock with a seven-digit serial number above it. Here, the same DiMarzios have bright chromed covers with just master volume and tone, and a three-way toggle.

Aside from the usual odd strapped-on feel of a V there's little to criticise tone-wise. It's certainly in the same ballpark as the AC Zemaitis, though there's slightly less ring and resonance, and it's darker and more robust-sounding too. Again we have that crystalline high end that's nicely balanced, not scratchy or sharp, and if anything this one suited heavier, gained tones a little better.

The two controls limit the potential for subtle tone mixes, but again both are nicely graduated. It's overshadowed by the AC Zemaitis, but in isolation, as a classic-to-heavy rock guitar, it takes some beating, and indicates Greco's 'mono-cut' Metal Fronts should tick all the right boxes too.

With original Zemaitis Metal Fronts valued at $30k upwards, these guitars - the closest you can buy to the real thing - don't seem over-priced. But what are we saying? As good as they are neither warrants its price tag - aside from the engraving, they're not difficult to produce and although 'Honduran' (aka South American) mahogany is hard to procure at the right weight and is rapidly getting more expensive, it still doesn't go near justifying this cost.

At three grand, the Greco, as nice as it is, is just a well-made mahogany V with metal bits. But value is very much in the eye of the beholder. If you want a Zemaitis, these guitars and the others in the dual ranges, are the only way to get one - the closest most of us will ever get to the real thing.