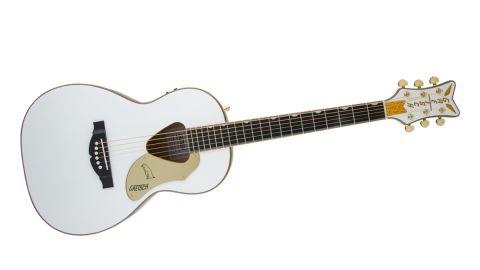 An excellent guitar all dressed up for a night out.

Gretsch is mostly known for the twanging, rockabilly tone of its hollow body electric guitars, but has always made acoustics as well.

The Rancher series adds some of the Gretsch styling to an acoustic platform, making for some unique instruments, including one with a Bigsby.

Let’s address this up front; this guitar is not taking any prisoners, visually. If it were a pop star, it would be Vegas Elvis. If it were an outfit, it would be a white leather miniskirt and a tassled waistcoat.

The original Penguin is a chambered solid body, with the styling of a White Falcon applied, and the same approach has been taken to the Penguin Parlour. The solid spruce top is, like all the wood, hidden under a coat of solid white paint.

The top bears a Rancher series signature - a triangular soundhole with rounded corners - and has a gold scratchplate with a penguin logo. The top and back are bound in the most extraordinary gold sparkle treatment; don’t expect some kind of gold leaf effect, this is glitter all the way.

Back and sides are of laminate, and there’s a sparkle effect heel cap to continue the theme. There’s an elegant, slightly notched bridge, with a compensated saddle of what looks like Nubone or similar, and a nut of a similar material at the other end.

The neck itself has 20 vintage style frets in a rosewood board, on a maple neck with a conventional, relatively slim C section (Gretsch calls it a U section). The board itself, bound once again in the ubiquitous gold glitter, is very handsome; within the glitter there are two further plys of pearl material, which make for a classy look, and then half moon position markers which Gretsch describes as “neoclassical pearloid thumbnails”.

The headstock, surely the focal point of this thoroughly extraordinary looking guitar, is V shaped at the top forming horns, and decorated with an incredibly lurid Gretsch logo, with wings coming out of the G, and a large truss rod cover all smothered with the same gold glitter. The closed back tuning machines are, of course, gold, and the guitar is finished off with extremely unusual knurled gold strap buttons on the endblock and the upper bout.

In case you should think that such an understated guitar was intended only for kitchen table jamming, Gretsch has fitted a Fishman Isys pickup and preamp, giving you a tuner, volume, and three band EQ, should you happen to take this shy, self-effacing specimen on stage. As with most (probably all) modern Gretsches, the Penguin is a well put together instrument. The paint disguises the quality of the woods, but everything is executed nicely, for all that it’s difficult to focus on the quality of the binding when you’re being blinded by the glitter!

The first impression on picking up the guitar is that it isn’t as small as some parlour guitars. Certainly it’s slim waisted and accessible, but the scale is fairly long at 25”, and the lower bout extends deeper below the bridge than on the Roots collection parlour we tested recently.

As we’ve already established, this guitar is much more for the stage than for cosying up in your favourite chair, and it’s still far from a super jumbo, just not the smallest of parlours. The neck is slim enough that you don’t really notice it, the white paint is very slick, and you’ll have no trouble hurtling up and down this neck, if that’s your bag.

A quick strum reveals a tone that’s much more resonant and full than you can normally expect from a small body. It’s a well balanced tone, so much so that it’s almost lacking character. The top end is bright, with a sparkling spruce tone, light and feathery. The mids are again airy and light, brightish, but more punchy than sparkling, while the bass is firm, with good projection; not big and booming, but not small or boxy at all.

Whilst the Penguin does have quite an intimate tone, it’s not really a typical parlour tone at all, perhaps more redolent of a mid sized model like a OO, and a good one at that. Like the Delta parlour we tested recently, the Penguin has good headroom when driven hard, but it’s best voice is available by backing off a little and playing with dynamics.

Fingerpicking is rewarding; there’s enough bass to make Carter style sound good, but more delicate and complex stuff really rings out; there’s a little less harmonic complexity and sparkle than the Delta, but it’s made up for by the excellent projection even when played gently, meaning you can be subtle and very audible at the same time, the consummate stage guitar once again looking like a capable kitchen table instrument.

Strumming reveals a bright, clear voice, ringing and lovely when played gently, and developing a bit of an edge when you dig in and push the top harder. Things never get messy, muddy or boxy though, even under really hard playing, which is a sign that Gretsch has got something very right with this sparkly little box.

Plugging in we have yet more evidence (if the glitter were not enough) that the Penguin is intended for the stage. The very capable Fishman Isys system, whilst having the slighty over-emphasised punch typical of piezo systems, is at least emphasising something essential about the character of the Gretsch, and does a fine job.

The guitar is impressively feedback resistant, even at high volumes, and we didn’t miss a notch filter at all. The tone answers well, to the acoustic sound, and, sonically at least, anyone should be happy with this guitar in a stage setting. Whether the visuals balance out for you? Well, that might depend how much of an exhibitionist you are.

This is not a guitar for the shrinking violet; if you’re going to play this, you will need to own that decision, every time you play. This will be a signature guitar, something that people remember you for and recognise you by.

Fortunately, it’s well up for the job tonally, and playability wise; for all its rhinestone cowboy looks, this guitar is no toy, it’s a real musician’s tool. We are far from faint hearted, and we loved it; the uncompromising glitzy, kitschy appeal really worked for us, and our contrarian side wants to take it out and play fancy fingerstyle in exotic tunings, or unadorned English folk songs of ordinary labouring men.

Naturally, it calls out for a Tammy Wynette cover to feature in either of those sets, and really, playing with that aesthetic is part of the charm. Some of our readers will be gagging on their coffee looking at this guitar, while others will be gasping in wonder. If you’re in the latter camp, be careful of playing one. You’ll most likely bring it home with you from the shop.