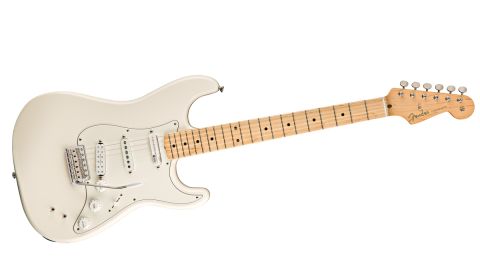 A brilliantly realised take on the Strat whose appeal reaches far further than just Radiohead fans.

Fender has produced a lot of artist-designed Strats over the years, but the format has stayed largely the same: a branded single coil here, a neck tweak there, but it’s still very much the model that set the world alight back in ’54.

It’s taken an unconventional player like Radiohead’s sonic architect Ed O’Brien to deliver a fresh take on the Strat outline, and one that can inspire a new generation of players - just don’t call it a signature.

Ed has crammed his ‘designed-with’ Sustainer Strat with tech while staying as faithful to the traditional Strat look as possible.

Radiohead’s Ed O’Brien: “I was always drawn to sounds that didn’t sound like the guitar”

The headline-grabbing addition is the Fernandes Sustainer, which provides the key to the alternate realm of guitar tones that awaits.

Essentially, the system generates a magnetic field, which causes the strings to vibrate - trust us, you can feel it working - and this interaction between the neck- position Sustainer Driver and the bridge humbucker results in infinite sustain and feedback sounds. The inclusion of said system results in a number of subtle but crucial tweaks.

There’s the addition of two mini-toggle switches to control the Sustainer system, shifting the trademark body-mounted output jack to the side. A tone control is replaced by a Sustainer intensity knob (marked ‘volume’), while the rear of the guitar features a 9V battery compartment and additional cavity for the electrical wizardry that operates the device.

Ed’s pickup choices bolster the model’s versatility further still. Complementing the single-coil Sustainer Driver is a Texas Special Strat single, which packs an overwound, beefier character than your vintage Strat types, plus a Seymour Duncan JB Jr single coil-sized humbucker in the bridge. Pair that with the Sustainer system and that’s a lot of tones from one guitar.

Despite the added gadgetry, the first thing you notice when you pick up the EOB Strat is the neck - as you’ll know from our interview with the man himself, Ed tried a lot of Strats, settling on this ’56 shape. It’s a more palm-filling V than the generic C we’ve come to expect from Mexican-made Fenders and provides an extremely comfortable, chunky feel, bolstered by an engaging light satin finish.

With the Sustainer switched off, you might expect the neck pickup to be adequate rather than impressive, but it’s one of the standout sounds here: a fat, crystal-clear humbucker-meets- single-coil sound that’s ripe for adding effects.

In-between positions will get you into glassier, more traditional (albeit hotter) Strat territory, while the middle-position Texas Special lends a shimmery, brighter texture - clean players will enjoy the Edge-like sheen this option lends arpeggios.

Our review model’s bridge humbucker, meanwhile, offered a slightly lower output than the neck, but adds a healthy helping of chime. Like the Sustainer Driver, it’s an ideal balance of single-coil transparency and humbucker weight - spot-on for jangly rhythm work.

Then, of course, there’s the Sustainer. The switch closest to the output jack turns it on and off, while the other selects between three modes: Natural sustains your current note; Harmonic provides a pitch a 5th higher; and Mix is a blend of the two.

Natural mode is great for extended drones, but the real fun comes with Harmonic mode which, when paired with a heavy dose of gain, produces tones akin to a theremin or synth that you can then manipulate using the EOB’s smooth-moving vintage-style Synchronized vibrato or external pitch effects, such as a Whammy pedal. Throw in a looper to see how the foundations of Ed’s sonic canvases are laid.

In many respects, the EOB Stratocaster isn’t a revolutionary guitar - after all, the Sustainer itself has been around for decades - but in pairing its namesake system with a hugely versatile set of pickups and a classic outline at a sub-£1,000 price point, Fender has produced a guitar that will appeal to players from all sonic walks of life.

Amid musings of ‘the death of the guitar’, we need instruments like this, which offer something different without being a gimmick: something that, in the right hands, can redefine the expectations of what a guitar can do.