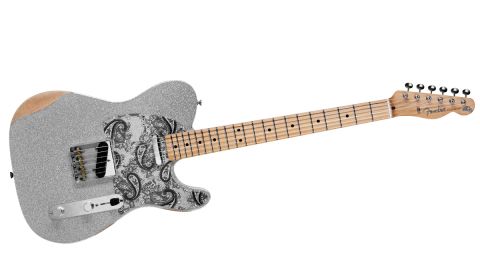 All in all, this is a collaboration that’s really worked, and you can’t say fairer than that.

When your name’s Paisley and you’re a country superstar who’s been playing the socks off Fender Teles all your life, it seems perfectly fit that the company and the man should get together to produce a signature ‘paisley’ style guitar.

Of course, ‘paisley-ised’ Teles are no new thing - Brad has been playing an original pink ’68 model for years, as well as several stylised custom versions. But one of many things we like about this one is the fact that for his mainstream model Brad has gone down the affordable Road Worn route rather than opting for a big-ticket Master Built Custom Shop job.

“The thing I’m proudest about this guitar,” he affirms, “is that it’s relatively inexpensive for young guitar players.” He’s also happy to point out how involved he was in other aspects of its design.

“I picked everything from the wood the body is made of, to the pickup rating, neck size and shape. It’s based on a ’63 Tele that I had, which was refinished this colour; I then made a pickguard for it. And Fender said, ‘Oh, we’ll make a bunch of these,’” grins Paisley, proudly of his creation.

So what’s different about this particular Tele? Well, as we’ve said many times, the model’s simplistic design - Brad calls it a “cutting board with a neck” - is the perfect template for customisation. Be that those pink paisley and blue flower models from 1968, f-hole Thinlines, boundbodied Customs, humbucking Deluxes, exotic timber versions such as the George Harrison rosewood, a mahogany P-90 model, triple-pickup-plus-piezo Nashvilles and a host of others.

Paisley’s Road Worn tells its own interesting story. Brad wanted a lightweight guitar so opted for a core of solid paulownia with spruce top and back. Growing incredibly fast (paulownia saplings can gain seven feet in a single year), it makes for a most sustainable timber as it can also colonise difficult areas where other trees struggle.

It’s also rather beautiful, with masses of lilac coloured, foxglove-like flowers. The paulownia and spruce sandwich makes for a supremely light, acoustically resonant guitar. Most obvious to the eye, of course, is the silver sparkle nitro finish and clear plastic pickguard with black and blue-grey paisley printing on the underside.

Up close it’s stunning, especially under lights, although some of the effect is lost from further away. Some relic’ing has been applied: lacquer checking and some fairly unsubtle forearm wear. But hey, it’s factory made in Mexico and is not a £5k Master Built dream, so we’d say this is acceptable, but perhaps question the need for ageing at all.

Brad stipulated that he wanted the neck to be fat and comfortable down at the nut end, for chords and all the speedy pull-offs that characterise his playing, but slim enough at the top for serious country wig-outs. He also wanted the thinnest of finishes (this one is oiled Road Worn) so it would wear through on the fretboard and round the back.

A soft ‘V’ profile and Fender’s now almost mandatory 241mm (9.5-inch) radius and medium-jumbo 6105 frets complete the picture for an instrument designed for a very serious player indeed. No corners have been cut where the pickups are concerned, with Paisley insisting on a custom wound ’64 Tele at the bridge and Twisted Tele at the neck.

Controls are the usual master volume and tone, plus three-way selector. While the bridge base is standard vintage Tele, the compensating saddles take care of any tuning issues associated with ‘ashtray’ bridges (T-lovers complain the ‘improved’ six-saddle setup doesn’t cut it, sonically).

Essentially, a small section of each brass barrel can be loosened and reset using a small hex screw. Almost indiscernible to the naked eye, it will be a welcome inclusion for those who can’t live with the Tele’s usual intonation compromises.

As you can imagine, a guitar that looks like this is going to be ravenously greeted in an office full of players. And after being grabbed by a variety of guitarists, a straw poll gave this potentially polarising neck a big thumbs up.

When performing open chords and those aforementioned pull-offs to open strings, it’s helpful to have something to pivot against, so too much meat removed down there can be counter-productive.

However, too fat at the top end can inhibit free soloing, so in that sense this ‘positive compromise’ really works. Of course, it’s not just a country guitar - none of the players here that tried it and loved it are country guitarists; it works for anything you throw at it (Jeff Beck would murder it!). Brad has been using the guitar live, so watching a few YouTube clips should confirm our findings that it’s dark, powerful and full of huge Tele tone.

The bridge ’64 has a gutsy bark that revels in overdrive but cleans up beautifully. Over at the neck, the Twisted Tele single coil provides everything from smooth jazz to sub-Stevie Ray blues - it certainly gave our Custom Shop Strat with Fender Fat 60s pickups a run for its money!

The surprise here, though, was the middle position: while neck and bridge are dark, powerful and woody, set the selector in centre position and it goes really hollow and twangy, for a completely new voice that does everything from dirty funk to Johnny Cash ‘ricky-tick’ rhythm. A fabulous sounding, immensely versatile instrument.

Occasionally when famous players get involved in creating ‘artist’ instruments, the outcome is based on personal quirks rather than the desire to make a great guitar that anyone can use.

However, Brad Paisley’s Road Worn Tele is one of those occasions where their input results in a real workhorse instrument - albeit one with its fair share of bling. And while we were unsure at first, the guitar’s look has really grown on us; the pickguard’s paisley artwork is actually rather subtle and the silver sparkle coming through creates a unique look.

We even like Brad’s ‘Stetson’ logo on the headstock. Whatever you think of its livery, as a musical instrument it’s hard to fault. Brad’s choice of the unusual paulownia and spruce ‘sandwich’ body is inspired. It weighs next to nothing, seems sonically inert so the pickups’ and strings’ sound is largely uncoloured by a particular wood’s ‘tone’, and it plays great straight out of its gigbag.

Also, given its sustainability and the guitar maker’s never-ending quest for new timbers, we can see paulownia appearing on other models in future. Streeting for around the magic grand means it’s an affordable ‘proper’ musical instrument, too, and one that could excel in any number of musical settings, certainly not just country.

Although currently limited edition, should it prove successful (and we have no doubt it will), it would be great to see the range expanded with other sparkle colours and perhaps a pau ferro (Fender’s new ‘rosewood’) fingerboard.