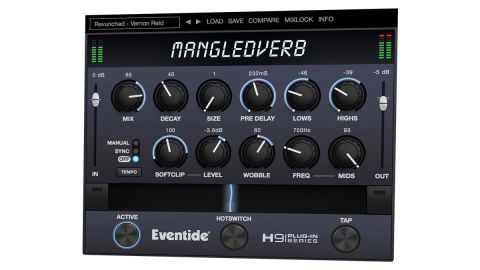 It might look a bit thrown together, but MangledVerb makes for a powerful weapon in any sound design armoury.

The second in Eventide’s H9 Plug-In Series sees the MangledVerb algorithm from the H9 Harmonizer stompbox - previously found in the Eclipse rackmount effects unit - reborn as a VST/ AU/AAX plugin.

Being part of the same family, it shares its GUI styling and certain functional elements with the UltraTap delay, as well as the venerable Blackhole.

At first glance, MangledVerb appears to be a fairly unremarkable reverb with the intriguing addition of a distortion control. As soon as you start using it, though, it becomes apparent that said distortion is utterly intrinsic to the overall direction and sound of the effect.

The lie of the land

The first thing that needs to be said about MangledVerb is that the signal path isn’t at all well represented by the layout of the interface, which has the controls for each section positioned in a bizarrely haphazard fashion.

Despite appearances, then, the input signal first enters the reverb section, the output of which is shaped by a three-band EQ and modulation stage, before finally being hurled through the distortion section. The dry/wet blend is set with the Mix control, and Eventide’s brilliant Ribbon and Hotswitch parameter morphing and switching controllers bring a powerful performance angle - see Hot to trot.

The reverb Size and Decay knobs set the distance and length of the reflections and tail. Size ranges from intimately tiny to massively epic, while Decay (which is scaled from 0-100, rather than in milliseconds) governs the attack level of the reverb as well as the tail length. At low Decay settings, the attack drops far enough to generate reverse reverb-style effects well suited to MangledVerb’s sound design- orientated remit. Up to 1500ms of predelay is on tap, too, set freely or tempo-synced.

Eventide’s proprietary Ribbon and Hotswitch performance controllers feel every bit as at home built into MangledVerb as they are UltraTap and Blackhole, opening the plugin up to highly expressive macro automation and A/B state switching.

The Ribbon is a MIDI-controllable slider that interpolates every control between two user-defined endpoint states as the “electric arc” is dragged left and right or clicked to any discrete point along its horizontal length. The ‘left’ and ‘right’ states of each knob are set by dragging the two dots collaring it, or activating the Learn mode button at either end of the Ribbon.

The Hotswitch, meanwhile, is used to jump any or all parameters instantly between two further states. Hold the Hotswitch button down until it flashes, set the knobs as required, then click the button repeatedly to toggle all knobs between the original state and the newly set state.

The EQ consists of High and Low shelves, and a sweepable mid-band (300-2000Hz). Like the Decay time, the EQ gain knobs aren’t representatively scaled in decibels, ranging instead from -100 to 100.

The Wobble knob governs both the rate and depth of reverb pitch modulation, from totally straight at 0 to seriously quavering at 100.

At last we come to the distortion, as controlled by the Softclip/Overdrive knob and gain- compensated for with the Level knob. Softclip/ Overdrive applies soft clipping from fully anticlockwise to the centre detent, then switches to dialling in overdrive from centre to fully clockwise. The jump from one to the other in the middle is presumably as smooth as Eventide could make it, but there’s still a very noticeable drop in intensity that needs to be borne in mind when automating the knob.

Most importantly, both styles of distortion sound glorious, with the pre-distortion EQ making it easy to tailor the response to the source material, correctively or creatively. Anything but polite (once you get past the lower end of soft clipping), the distortion merges with the reverb to often dazzling effect, adding bite, sizzle and space to regular instrumentation (or savagely decimating it), and delivering a wealth of harmonically interesting colours for sound and soundscape design.

A unique textural spatialising and saturation toolbox, MangledVerb is a filthy treat.