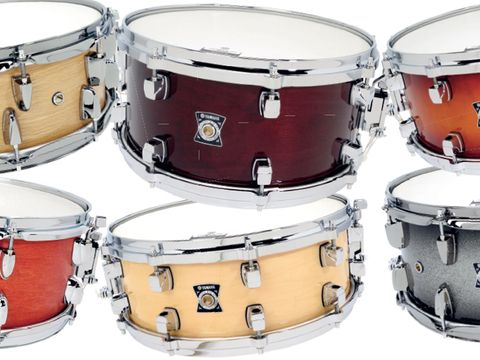 This range of Yamaha snares lets you choose from a wide variety of carefully selected premium features and options to better complement your playing style, without the price tag that often comes with entirely custom instruments.

In terms of snare drums, Yamaha is perhaps best known for its Signature drums - and rightly so, with the range featuring drums designed to the exacting specifications of such luminaries as Steve Gadd, Dave Weckl, Elvin Jones and others.

For 2008, however, Yamaha has decided to reinvent its standard snare lineup in a move that might well give the Signature range a run for its money. Instead of focusing on wood type, Yamaha has grouped the snares by category of intended use - there's the Sensitive Series, the Loud Series and the Vintage Series. Within each Series there's a selection of sizes and finishes to choose from, meaning that you can almost create your own signature snare.

We've been sent a selection of the available drums in varying sizes - two Loud, three Sensitive and one Vintage Series drum.

Each Series is characterised by a different approach to shell construction, which, so the theory goes, helps to emphasise the various qualities the design team felt should be to the fore on each model.

The Loud Series drums, for example, are made of eight-ply oak. Yamaha says that because oak has a low fundamental note it can cut through loud music without sounding brittle. The Loud Series also has eight air vents drilled into the shell to dry the tone and the bearing edges cut at 45 degrees top and bottom. We were sent a 14"x5 1/2" in Matte Natural finish and a 14"x7" in a very eye-catching Black Sparkle Sunburst lacquer.

Designed as more of an all-rounder, the Sensitive Series drums arrived as a 14"x6 1/2" in Amber Sunburst, a 14"x5 1/2" in Red Natural Pearl and a 13"x6 1/2" in Yamaha's signature Cherrywood finish. The Sensitive shells are seven-ply North American maple and have the top bearing edge cut at 60 degrees to provide more shell/head contact for a warmer sound, with the bottom cut at 45degrees for consistent response. The Sensitive drums were all fitted with single-point lugs and die-cast hoops.

The final drum was a 14"x6" Vintage Series, finished in a curious Vintage Apple reddish pink stain. According to Yamaha, the Vintage drum design was influenced by some of the most popular classic snares and features a four-ply maple shell with six-ply reinforcing rings (re-rings) top and bottom and a rounded 60 degree bearing edge. The Vintage drums are fitted with low-mass single lugs and thin triple-flanged hoops for minimal shell contact.

All of the drums were fitted with Remo Ambassador coated batter heads and clear snare side heads.

Each drum rather thoughtfully comes packed with a Yamaha drum key and a 1/2" O-ring to help you find your ideal sound. First up is a Sensitive in Red Pearl Natural. With a pearlescent red-tinted clearcoat, this is a very fetching drum - the light-toned maple offset by the gleaming chrome lugs and rims.

A couple of quick turns of the drum key and a very useable sound emerged immediately. Fitted with the Absolute strainer, we were able to accurately tension the snare at either end to maximise response without choking. A very defined backbeat was the result, with a little ring from the single-ply head, but with a warm fundamental tone.

The 13"x6 1/2" Cherrywood was next. The deeper drum gave a more woody character on the initial stroke, a strident bark when cranked up, or a fat, wet slap when detuned. The 14"x6 1/2" was articulate and warm.

Unable to resist some beef, the Loud 14"x7" was the next drum to be put through its paces. As its dimensions suggest, it has one heck of a backbeat for those 'power-ballad' moments, but the drum's size belies its versatility. The crunchy, dark tones of oak, together with the dryness imparted by the eight vents, meant that it reproduced delicate ghost notes well. The 5 1/2" model marries that crunchiness with a higher pitch and a drier note - the air exiting the shallower shell quicker.

The Vintage was the final drum to be tested. Its Apple Pink finish won't be to everyone's tastes, but there's no denying the great sounds it elicited - the thin shell spoke easily, with a rounded, wooden tone and bags of sustain. The snare beds let you run the snares loose for an articulate, old-style sound and rim shots were clear and bright.