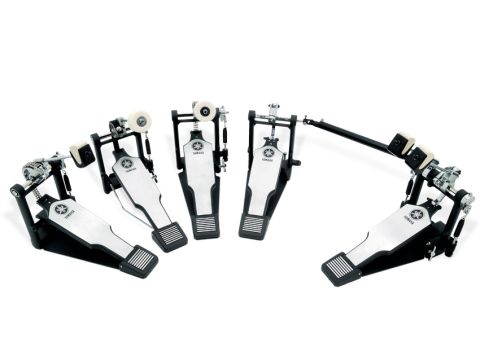 Yamaha's pedals tend to be overshadowed by the flashy marketing gimmicks of other companies, and it's a shame. The DFP9500D offers a product not readily available from other mainstream companies like Tama and DW, and Pearl's new direct-drive offering is still young, whereas Yamaha has been offering a d-d pedal for years.

Yamaha has always offered a full range of drums and percussion, and its range of stands often receives plaudits alongside the attention-grabbing drums - Yamaha like to emphasise they're made in their motorbike factory!

The company's pedals, on the other hand, are often overshadowed. Yamaha's last attempt to increase interest in its pedal range resulted in a fusing of mythology and marketing, and coined the 'Flying Dragon' moniker. For this latest iteration, the airborne serpent has been dropped, and the whole range has had a spruce-up.

We've been sent one double pedal and three single pedals for review. The singles are the top-line FP9500C,mid-range FP8500C and the quirky FP8500B - the 'C' and 'B' referring to 'chain' and 'belt' respectively. The double is the top-of-the-line DFP9500D - the 'D' meaning 'direct drive'.

All of the pedals share the same cast and machined footboards, with a handsome smooth steel playing surface and recessed Yamaha logo. The pedals also share the same side-operating clamp mechanism and, with the exception of the FP8500B, have a fixed base plate.

The pedal uprights appear hard-anodised and have reinforcement bars below the rocker shaft which are designed to eliminate flex and have full bearings either side.

The FP9500 series pedals have independent adjustments for primary beater angle and spring angle, and the double has a 'hex' linkage that resists power-sapping twist between the main and slave pedals. The FP9500 pedals come with a new, double-sided beater - felt/plastic - while the FP8500 pedals ship with Yamaha's classic felt beater.

All pedals have rubber inserts in the hoop clamps, so they shouldn't damage the finish of your bass drum hoops. Unlike the others, the FP8500B doesn't have a base plate, instead relying on the old system of sprung steel shafts seating in holes in the upright casting, the ends of which are coated in rubber to prevent rattling.

The belt is made from nylon webbing which sits on a felt-covered cam. Since there's no base plate, the 8500B folds up smaller - useful for those looking for minimalist hardware. The FP9500s also come with their own smart, hard-sided soft bags.

Once all were unboxed and the different variations carefully catalogued, we first gravitated to the FP8500B. The belt drive provides an immediacy that chain drive pedals sometimes lack, and so it proved with the F8500B.

The lack of base plate means it's more at home on the uneven surfaces the jobbing drummer is likely to encounter, and because it shares the features of its bigger brothers it wasn't found wanting - definitely a pedal to consider as a back up in the gig bag or a main for the lighter-of-foot.

Next up was the daddy - the DFP9500D. Along with the belt-drive, we've also enjoyed Yamaha's direct-drive pedals - a linkage consisting of a metal rod between the footboard and the beater cam.

Because it's directly connected it affords the player a feeling of being in complete control of the beater. On the return stroke, the direct linkage pushes the footboards up which means the pedals feel quicker and more responsive, making intricate bass drum patterns much easier - 'fugga dugga' never felt so good!

The standard cam profiles of the FP9500C and FP8500C meant that the chain drive pedals had a linear response, not quite as fast as the DFP9500D but certainly on a par with comparable pedals. The sturdy base plate, stiff uprights and double chain meant there was little noticeable sideways flex.

One minor niggle: despite the myriad adjustment features, none of the pedals included a drum key - unusual for Yamaha, so possibly just a one-off for the test pedals.