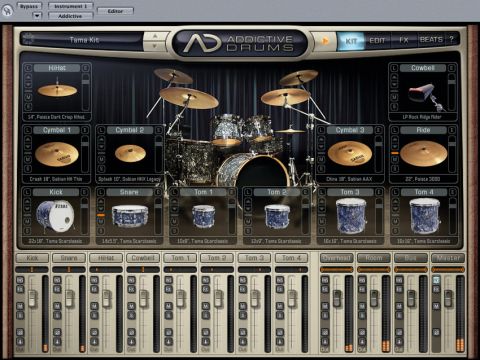 Nice to look at and easy to use, Addictive Drums is right up there if you want top-quality live drums.

With drum kit plug-ins springing up all over the place, it's hard to know which to choose. In fact, given how long the libraries for many of these plug-ins take to install, it sometimes feels like the quickest and easiest option is simply to go and find a real drummer!

Intriguingly, XLN Audio has taken a fresh look at the live drum ROMpler concept and come up with Addictive Drums. But with just a 3GB library, can it really compete with the likes of BFD and DFH Superior?

The plug-in's interface seems familiar - it's clear that Addictive Drums' developers were influenced by the design of existing software, and apparently, super-producer Max Martin provided his opinions during the development stage.

A preliminary look reveals everything that you'd expect to find: effects, patterns, processing and the inevitable mixer.

Addictive Drums has three main elements: a sample library, onboard effects processing and performance patterns. As we've already mentioned, the library is quite compact, though if you're a Mac user, you'll find it difficult to move this from your system drive.

The library comes in a proprietary format and as one single data file. It includes three main kits and the source samples were recorded at 24-bit/96kHz. Although at first glance the library might not seem to be that extensive (add-on packs are now available, by the way), the basic kit patches are complemented by about a hundred presets. These make use of the onboard processing and give you an excellent palette of sounds that goes way beyond a typical live kit. What's more, they're all fully editable.

So, what exactly do we mean by onboard processing? There are a number of aspects to this; you'll notice that there's a mixer on the main screen, and each piece of the kit can be opened in the Edit screen to reveal a full chain of processing. Here, you'll find everything from basic sample manipulation controls (envelopes, pitch and filter) to compression, distortion, EQ and saturation devices. And because the mixer is always visible, you can tweak and balance without having to switch screens.

The mixer also hosts a few other notable features, including feed levels to the overhead and room mix mics, mic balance controls for the kick and snare (each has two mics), and send levels to the two reverb busses.

Although AD is playable via MIDI (or from its interface), for quick results it also has a pattern library. This is accessed via the Beats page and contains over 3000 beats and fills. These are arranged by style into around 200 songs - each of these contains many variations, and they can all be auditioned from the browser. When you've found what you want, you can drag your chosen patterns into your host's arrange page as MIDI.

The simplicity of this approach is matched across the rest of Addictive Drums. In fact, if you've used one of the established drum ROMplers, you'll find this one a relative breeze. Even novices should be able to get to grips with it quickly, and if you get stuck, the manual's a mere 30 pages long.

You'll soon discover how easy it is to audition using mouse clicks (with location-sensitive velocity), and interface familiarity comes quickly. Unlike in some sample-based instruments, load times are quick, and this makes Addictive Drums feel slick and responsive.

In our tests, playback was consistent even at low latencies, and the CPU hit minimal. All of these things help to ensure that this is a fast and fun plug-in to use.

What should be noted is that XLN Audio have opted not to include some of the more complex configuration options that you'll find in rival software. So, although you can control overhead and room mic levels for each sound (and buzz level for the snare), beyond this, the cross-bleed options are set.

Happily, Addictive Drums does have a few innovative features of its own. Firstly, the mixer includes a submix bus, which is great for setting up a compressed blend. Also, if you want to generate a typical 'drum machine' type sound, the default 'alternate' sample option can be switched to 'single'. Finally, all the cymbals include a choke sound for realistic muting.

On the whole, Addictive Drums' sound quality is excellent, but if we were pushed to make a criticism, it would simply be that there's a 'samey' sound to it that's consistent with everything having been recorded in one studio.

All told, though, Addictive Drums is one of the most accomplished plug-ins we've seen in a long time, and its slickness easily compensates for the slightly small core library. This one will give the established players a real run for their money.