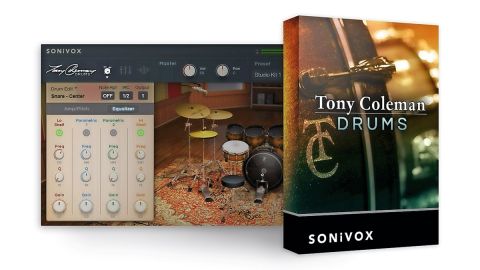 If you're after some more organic sounds to trigger from your e-kit for blues, jazz, funk or fusion, SONiVOX is the perfect studio companion.

With so many drum sample packs on the market, it's often easy to stick with the big guns and overlook some of the lesser known brands out there, but as we've seen from the likes of Steven Slate and, more recently, Spitfire Audio, there's a lot to be found by scratching the surface.

SONiVOX may not be the biggest known brand in the drum world, but as part of the inMusic family, it's amongst good company; sister brands include Alesis, Akai, M-Audio and Numark, to name a few. For its latest release, SONiVOX has enlisted of Tony Coleman, the man who has provided shuffles for blues greats Buddy Guy, Albert King and, most notably, BB King.

Tony's seven-piece Mapex Saturn was set up (along with hi-hats, ride and three crashes) in Ardent Studios, Memphis to be captured as a multi-miked, multi-sampled instrument resulting in a whopping 20GB of samples.

These are housed in a custom plugin that you access from a DAW or plugin host, offering two output versions (stereo or16 individual outputs). Every piece of the kit has its own volume, envelope pitch and four-band EQ accessed from the main screen of the plugin, plus there's a friendly mixer with faders for the kick, snare and hats, a tom group, stereo overheads and stereo room mics.

As well as all this, there is a master effects section comprising further EQ, compression and reverb. That's quite a lot of stuff, so naturally the people at SONiVOX have built a range of presets for you to get started with.

Using SONiVOX's interface is simple, particularly if you're used to this kind of software. The main screen shows you your virtual drum kit, with the selectable screen on the left displaying the envelope/pitch, EQ, mixer or effects. The kits have been arranged into different categories (Studio, Rock, Funk, Blues, Jazz, Neo Soul, Garage, '80s Rock and Unplugged), with each kit giving you the option of snares on or off, and an alternative snare drum sound. In total, this means you get 44 presets.

The kits can be on the slow side to load, which is frustrating given that often the bulk of the kit does not need to be reloaded - for example, switching the snares off only needs to affect the snare samples - but it's worth waiting for. It's actually quite incredible how SONiVOX has managed to wring every last drop of character out of one drumset.

The toms cover a huge range of pitches, all the while maintaining a full sound that'll work well for most styles. One of the most impressive features, though, is the inclusion of sticks, brushes and Hotrods on the Studio kit. Sometimes brush samples can be difficult to translate to an e-kit setup, but SONiVOX have nailed it.