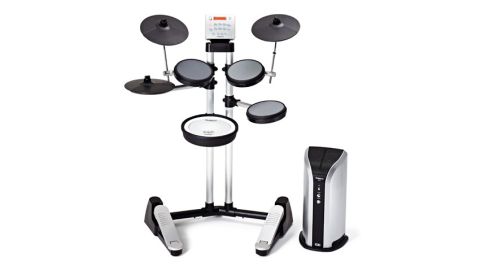 You can't tweak the presets on the HD-3 but the choice of sounds now gives the kit a wider scope and, along with several other improvements, creates an enjoyable playing experience.

The original HD-1 (precursor to the new HD-3), intersected the boundaries between musical instrument and home entertainment. When it was ﬁrst unveiled ﬁve years ago, its radical design sparked interest from the most unlikely places, including the national press and The Gadget Show.

While it quenched the thirst of public imagination and gadget geeks alike, it also provided a ﬁrst and slightly more affordable step towards owning a piece of V-Drum technology.

As the HD-3 is aimed primarily at the beginner (and the module is simple to operate), much of the HD-3 manual is dedicated to the basics of drums and drumming - this includes notation, like-for-like comparisons with acoustic drums and how to grip the sticks and operate the pedals.

For review purposes Roland has kindly included the PM-03 drum monitor with a 2.1 speaker system, designed to sit directly under the pads of any electronic kit. Roland has also included the excellent DT-1 V-Drums Tutor - interactive tutorial software featuring 60 songs, a wealth of exercises and practice routines designed to link from a V-Drum kit to a PC or Mac via MIDI or USB.

The HD-3 is a ﬁve-piece kit (in terms of a conventional acoustic model), which all centres around two 4cm diameter vertical aluminium tubes. To this the module, built-in hi-hat and kick pedals (which also serve as huge 'feet' of the stand for stability), are attached.

Clamped to the centre poles are ﬁve separate 25mm diameter arms on which the toms, crash and ride share the top two, while the hi-hat, snare and tom 3 each have their own separate arms - all can be adjusted to suit the user height and reach. Nifty channels in each piece of the tubing allow the pad cabling to be tucked out of harm's way and enhance the overall kit aesthetics.

With the exception of the cloth coverings of the toms and a slightly larger module (accommodating the welcome addition of an LCD display and extra kit buttons), the new HD-3 appears virtually identical to the HD-1. However, there have been several signiﬁcant improvements, not least double the number of kits and dual zone snare which will permit authentic snare actions such as rim shots, cross-sticking etc.

The kit now also features dual-zoned pads for the cymbals which will give potential for elements of a 'realistic' performance - for example, it is possible to grasp each of the cymbal pads at the edge and choke the sound.

Much of the kit comes ready-assembled, so from taking it out of the box and attaching the cables to the very ﬁrst strike is literally a ﬁve-minute job. Getting acquainted with the HD-3 module proves to be just as rapid - a simple button-prod to choose any one of 20 kits is about as difﬁcult as it gets.

These kit buttons also start/stop the pre-programmed drum rhythms by holding one down for a few seconds or so. Unfortunately, these prove nothing more than tiny demos which (as the sounds from the pads are not accessible), the user has to sit back and listen or simply mime along to the patterns. This is where the DT-1 software could prove to be an essential additional purchase.

Having played the kit for a short while, it is apparent Roland has made a giant leap in terms of sound and, in certain areas, the playability. While the pedal response appears a little better than the HD-1, without the physical 'feed back' of the pedal mechanics and rebound from a kick head, the specially designed HD pedals still feel a bit of a trudge - perhaps this is the price to pay for a quieter beater-less system.

We also think the feel of the old HD-1 toms were actually better than the cloth covered HD-3 ones as the new models seem to absorb each strike instead of producing an acceptable rebound.

Quite oddly, it's when playing with some of the slightly gimmicky 'SFX' real voice samples of the 'Ahhhhh's' and the breathy 'Haaa' sounds that gives a taster of the HD-3's dynamic potential. From a delicate little tickle to a good hard wallop, the module interprets the stick strikes with surprising accuracy.

Ultimately it's the combination of the dual-zoned mesh head on the snare and some decent snare samples which allows buzz and double strokes to be easily created, demonstrating an impressive degree of voice triggering.