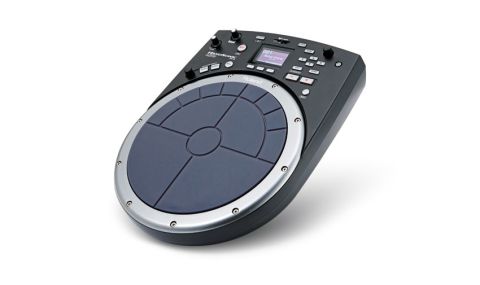 The flexibility on offer in the HPD-20 means that no matter whether you're a DJ, percussionist or drummer, you can use it in a way that works for you.

Roland first introduced the Handsonic percussion pad 14 years ago, so it's about time that the flagship model got an update. This came at NAMM 2013, but as is often the case, it's taken until now for the HPD-20 to travel the globe.

So what's new? Well, take a quick look at Roland's marketing videos, and you'd be forgiven for thinking that the HPD-20 is aimed at bedroom producers and gigging DJs, and while this is true, percussionists are clearly still very much in mind.

Roland has boosted the internals of the HPD-20 to include more of everything, more sampled orchestral and world percussion, more contemporary electro sounds and there are even some live acoustic kits in there. Overall you get 850 samples to choose from, making use of Roland's superNatural sound engine.

One of the most exciting new features is the ability to import your own .wav samples, allowing you to build custom instruments and kits, and as with previous incarnations of the Handsonic, you can connect a hi-hat controller and external trigger for when you run out of digits. Oh yeah, and they've painted it black.

So, we've established that there are some hefty sonic features and cosmetic upgrades, now for the bad news: what's missing. We were quite fond of the HP-15's ribbon controllers, and we liked the fact that the HPD-10 had four buttons to take you back to some staple sounds quickly. Brace yourself; these have been removed for the HPD-20. Don't panic, though, because you still get a shared 'Realtime Modify' control for changing pitch and effects on the fly, plus the D-Beam theremin-style control.

Where you were once met by a confusing cluster of knobs, switches and slide-y things, you are now presented with a cleaner, friendlier layout. There is one other point though - with 13 assignable zones, the HPD-20 has fewer pad sections than the 15.

Plugging the HPD-20 in, you'll find it very intuitive to navigate your way through the sounds, and what sounds they are! An array of acoustic percussion instruments ranging from the expected (congas, bongos, cajons, etc) to the more experimental (bowed waterphone, anyone?) have been captured in fantastic detail by the bods at Roland. Couple this with the brilliantly thought-out dynamic switching and it's nearly as expressive as the real thing.

For example, if you have a conga set up, you can access all of the sounds you might need individually, but also interactively. Hitting an open slap sound while resting your other hand on the pad will give you a muted slap. Applying pressure to one of the other pads while the note rings will bend the pitch.

The electronic sounds are genuinely usable, without too much of that dated feel that often comes with brands trying to keep down with the 'yoof', and you need not worry about the fact that you're minus two pads. In fact, it's still quite tricky keeping track of the baker's dozen, and easy to mis-hit the pad you're aiming for.

Talking of the pads themselves, the rubber is somewhere between regular drum pads and a mouse mat, with a slight sponginess that's solid, yet still very forgiving on your hands, even after long sessions.

Once you're done scrolling through preset kits, you'll most likely want to build your own. You can start from scratch, or, if you want to preserve the bulk of a preset and tweak a few of the instruments you can simply copy it to a user patch and replace what you need.

Starting from nothing is easy too, if tedious. Scrolling through sounds, menus and triggering options is boring, and we don't think it's unreasonable to expect a computer-based editor to make this quicker in this day and age. You build your kit from the internal instruments, or you can import samples on a USB stick into the HPD's memory (six minutes of stereo audio, split into 500 sample slots). We tried it using our trade show-issue USB key and it worked like a charm.

Once it's loaded, you have the option of which pad section to assign it to, how you want to trigger (as a one-shot, loop or gated sample), and you can process it using the on-board multi-FX unit. In short, it brings the brilliant flexibility of products like the SPD-SX to the Handsonic.

There's a lot of features to go into here, and we could fill the whole gear section talking about them. We started out wondering exactly who the HPD-20 is aimed at. Percussionists? Producers? Drummers that want to add some extra sounds? The answer is a resounding 'yes' to all of the above.