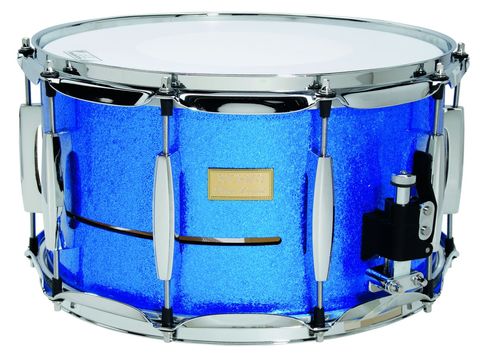 The shells are vented, but not so gaping as to sacrifice the timbre and warmth of the wood. The effect is quite subtle but makes the drums drier and punchier. Alan is a hugely experienced craftsman and his drums always sound good and have a unique character. They're genuinely handmade at prices to suit the everyday drummer.

Richmo's one-man workforce Alan Gilby has been at it again, resulting in another new variation on his line of popular, bespoke handmade drums. This time Alan has called the drums Power Vented (PV for short), as each drum has two slots cut into its nether regions, acting as large air vents - the equivalent of the 'f' holes in a violin or the sound hole in an acoustic guitar.

Most drums have a small air vent to release air pressure when played and the idea of making the hole larger is certainly not new. So far as we're aware it dates back at least as far as Ludwig's '80s Classic Slotted Coliseum. The Coliseum had a 1" wide slot cut right around its midriff.

More recently, American indies such as Spaun and Orange County have tried similar designs. Spaun followed the Coliseum pattern while Orange County's vented snare drums have large circular holes drilled into the sides. Some while back, British inventor Marcus de Mowbray went further, producing snare drums with no shells at all - just a pair of rims joined by tube lugs - and they sounded just fine.

Alan Gilby remembers reading about Marcus de Mowbray. Then one of his customers reminded him just how much force modern drummers sometimes play with. Alan says, "Mike Hales, a great rock drummer, told me that the power inside his Richmo bass drum was so huge it blew a three inch hole in his front head."

So Alan set about experimenting. "I first built a drum in two halves and let the fittings hold it together," he says. "Then I found that if I just cut two slots in the shell instead it sounded great."

Richmo has sent three PV snare drums for consideration; a 14"x4", 14"x6½" and 14"x8". They're probably the best looking Richmo drums we've ever seen, resplendently finished in superior glass glitter wraps. Each shell has two relatively narrow ¼" deep slots cut near the bottom. Each slot runs round three eighths of the shell on each side of the strainer and butt. So in total, three quarters of the shell is slotted.

The drums are all six-ply, 8mm thick and made from top grade Finnish birch. They're hand built the usual Richmo way, with the grain running vertically on the inner and outer plies. Alan says, "The wood is bent by muscle power as I reckon using heat in any form, such as microwaving or steaming, ruins the tonal qualities of the timber."

The two smaller drums have eight tube lugs while the deeper drum has 10 die-cast bridge lugs. The two larger drums are fitted with the excellent Nickel Drumworks piston lever strainer, while the 4" drum has a piccolo-style side lever strainer. Black rubber grommets and washers are used on all fittings, and each tension bolt passes through a rubber sleeve extending over the top part of the thread, so the bolt is isolated from the metal rim.

To understand the effect of a larger vent hole in a drum, think of what happens to your bass drum when you cut a hole in the front head. The drum immediately has more punch, with less boom but more depth. There is also a loss of timbre that roughly corresponds with the size of the hole.

Conversely, if your front head is completely intact, there is more woody timbre and more kickback on the pedal beater. The latter means you can't bury the beater - instead you have to play off the head in the same way that you bounce your sticks off your other drums. This rebound is an indication of the air pressure that is created when you strike a drum.

Increasing the size of the hole in your snare drum has a similar effect to that which you observe with your bass drum. Shell resonance is reduced because the air shoots out more readily. At the same time, the air rushing out reduces the sustain of the drum a fraction, making the sound drier. Since the drum is less stifled, you may also observe an increase in volume and, since the sound is drier, there's less need for damping.

All of this applies to each of the three drums under review, although the effects are subtler than with, say, the Spaun split snare, because the Richmo slots are much narrower. The 6½" drum is the all-rounder of the trio, sounding good whether it is tuned high, low or medium. It has warmth and authority. There's still plenty of sympathetic ping when you play rim shots, but we never felt the need to apply any damping.

The 14"x4" has a sharp, modern response, but still has body. The centre beat is slightly deader, rim shots higher pitched and cross-sticks tighter than with the 6½". It is a nice compromise size between a piccolo and a standard snare. As for the deep snare, the centre backbeat is as fat as you would hope, while the overall feel is slightly less responsive than the others, due to the depth.

Rim shots are fantastic - they have a great airy thunk, like throwing a metal dustbin down a well.

Alan Gilby is an ideas man. He dreamt up the Resonator decades ago and is always testing out new designs. Although the Power Vent is not totally original, it's logically thought through.