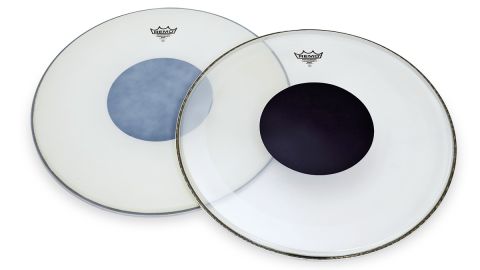 Combining the perimeter Powerstroke-3 damping ring with the Controlled Sound CS Black Dot centre reinforcement is a smart combination that was just waiting to happen.

Since 2009, jazz and fusion drummer Steve Smith has been playing CS heads on his toms, having swapped from Ambassadors.

So now Steve has inspired Remo to develop a bass drum version, based on the Powerstroke-3 - the most popular bass drum head of recent years - but with a big CS dot in the middle.

We read yonks ago that the very first CS (Controlled Sound) Black Dot head was designed for Buddy Rich to strengthen the head where his beater was causing havoc. This was
way back when there were only coated Ambassadors, Emperors and Diplomats in the catalogue.

So the CS was really the first compound head, and the idea was to reinforce the single ply head, more than to dampen it.

This new Black Dot is a mash-up of CS head with Powerstroke perimeter damping ring. A double whammy. There are Clear and Coated versions. The coating is tough yet translucent, with a pronounced nap.

The inner perimeter flap of 10-mil thick Mylar is about 6cm wide. Effectively it is a permanent 'O' ring, subduing high overtones at the edges. The centre black dot is 25cm across on the 22" and 20cm on the 20", so more of a substantial sized patch than a dot.

With the big CS dot and the P-3 outer ring, this is already quite a heavily damped head. We put the 22" Clear on our birch Yamaha 9000, swapping out a fat Aquarian SuperKick-II rock-funk favourite.

The difference is marked - the Remo opening up the drum, but in a focused and sharp, harder manner. Not so much a wet slap or thwack, more of a rounded, concise thump. The sound is close to the familiar Powerstroke-3 sound, the Black Dot being there more for strengthening than for damping.

The centre of the head is where you might fix some form of protective impact patch anyway, and it's where the head is least resonant.

We then tried the 20" Coated P3-CS on our Gretsch, which is maple and tuned higher for jazz. The maple has a slightly warmer sound, but again, without any further damping there's a relatively short sustain with a convincing crack. And left open you really hear the timbre of the shell surrounding the decisive compelling beat.

There's no need for any further damping if you can control your beater bounce. But with just a touch of towel against the inner batter the effect is even more dense and deep.