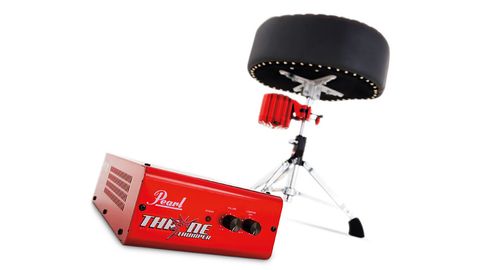 Whether gigging or practising, this monitoring aid not only boosts your bottom-end but your confidence too - taking it away again is simply unnerving!

The Throne Thumper was designed so a drummer could experience the same low-end sensation from the bass drum and bass guitar without having to be blasted out of the drum stool by conventional speaker-based monitoring.

The "silent subwoofer" was designed in partnership with Pearl - one of the world's leading acoustic drum manufacturers and ButtKicker, who produce a range of 'shakers' or transducers aimed at gamers, cinema, home cinema and of course the music industry.

The system comprises two basic components; the amplifier and transducer or 'thumper', both of which are finished in the same vivid red as Pearl's R.E.D. BOX drum module. The minimal controls on the amp consist of a volume and a low-pass filter (basically a crossover), which, in principal, allows only the lower frequencies to reach the thumper.

This works in a similar way to a loudspeaker (though there is no cone), and in place of a 'voice coil' there is a piston. When energised, it shakes the whole assembly to each beat, through the drum stool and up the spine of the player.

Input signals can come from a whole variety of sources, for example from a mixing desk (when miked up with an acoustic kit) or directly from an electronic set up. To the rear of the amp is a single mono jack-socket for the source input, mains switch, mains socket and a set of speaker terminals.

The front is sparse with just the aforementioned volume and filter controls, a power light and the familiar Pearl logo.

The volume set mid-point and the filter turned down keeps everything tight and eliminates all but the lowest kit frequencies such as the kick and floor tom. Turning the filter up allows more of the higher frequency kit voices through, but it can 'cloud' the sensation, making it less effective.

Also, if the volume and filter is set too high for prolonged periods, the transducer gets very hot - fortunately the heat dissipates quickly in 'normal' use. The speed at which the Throne Thumper interprets each beat is fairly impressive, almost adding another sense while, oddly, helping to tighten our performance.

However, as with conventional monitoring, we found that if the volume was set too high, we were pulling back from the kick - and finding just the right balance is the key to a successful performance. The benefits of tactile monitoring are clear; it is inaudible to the band, the audience and, no matter how loud either becomes, the sensation remains the same.