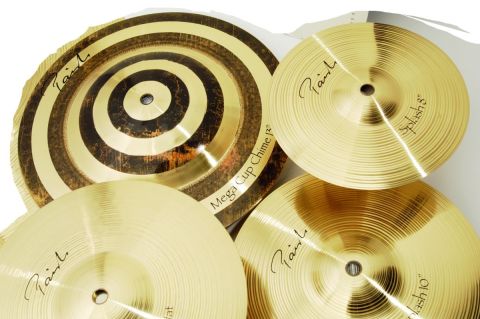 The Signatures were a major step forward in Paiste's development and they are standing up well in a crowded market. They have Paiste's hallmark brightness and crispness, but they have gravitas too, something that some earlier Paistes might have lacked. The cymbals still sound modern and each one is an instrument of distinction.

Originally revealed in 1989, Paiste's Signatures caused a major ruckus in the cymbal world. Paiste made a big thing of their new patented bronze formulation, Paiste Sound Alloy. However close this was (or is) to the traditional cymbalsmith's B20 bronze, Signatures impressed everyone who played them.

Drummers such as Jeff Porcaro raved about their sparkling clarity.

Revisiting many of the models now, they still dazzle. Paistes have a lively, articulate response, different to that of others. To some this makes Paistes a little transparent, to others it's the main reason for buying them.

This cross-section of the range are mostly established models but Paiste is still adding to the series. The latest is a 21" Dark Full ride. Paiste says it is "earthy and meaty". There's plenty of wash and body, but it's controlled, and the stick sound is a clean ping providing the Signature brightness. The darkness follows from beneath.

There are two other 21" rides. The 21" Silver Mellow ride is indeed silvery sounding. It has a tingling, high pitch over a warm background. The stick sound is uncannily clear but quite soft, not a million miles from a flat ride. It has a relatively narrow frequency range that won't clutter the overall sound of your band.

By contrast, the 21" Dry Heavy ride, being weightier, has a higher pitch and thicker sound. Stick response is dry, but there's a massive, groundswelling after-sound underpinning it.

There are also two standard 20" rides, which couldn't be more different. The 20" Full ride is probably the best all-rounder here. The 'Full' of the title describes the way the stick response is immediately suffused with a buzzing atmosphere of wash. There's a musical, balanced feel to it that lends itself to general purpose work.

The 20" Dark Metal ride is the most distinctive. It has a lathed bell and a 1" outer perimeter. The rest is black and unlathed with leopard spot circles. It's a real clanger - the thick stick response jumps out, and sounds rather one-dimensional and rowdy.

Finally, two real heavyweights. The 22" Power ride is hard, abrupt and imposing. It also has the loudest, ringiest bell of the lot. Crash it and walls fall down - be warned! It's also drier than the 22" Dry ride which is lower pitched, has more spread and seems more amenable.

Starting with the biggest, the 15" hi-hats are firmly in the John Bonham tradition, raising absolute hell when played half-open. They have Paiste's original Sound Edge wavy edged bottom cymbal, which expels the air when you stamp on the pedal, dramatically amplifying the 'chick' sound.

These big hats are sparklingly ferocious. At the opposite end, the 10" Micro hats are very nifty. They have a full sound for such small cymbals, with more beef than expected, though obviously focused. They're sharp as nails and very nimble. Great for a second voice.

Our favourites are the 13" Dark Crisp pair, which combine most of the qualities we expect from hi-hats - they are sensitive and crisp but have depth and grittiness. The 14" Heavy hats are also impressive, but in a different way. A heavy top cymbal gives you a louder, toppier closed sound.

However powerful the band, you don't have to open this pair up to be heard.

I love most Paiste crashes, and the Signature crashes are as good as they get. The sparkling clarity I spoke of earlier is here in abundance. The Full crashes are superb - they have a beautiful, rounded and sweet tone, perfectly pitched for their size. The Fast crashes are thin, dark, and almost sinister, ideally suited to fast tempo, fusion style, fussy and accurate playing.

The Mellow crashes are deeper still - a quick response is followed by a fairly short decay. We found them articularly luscious when not played too loudly. The Power crashes are bigger, heavier, higher pitched and louder, with a more strident sound.

The 8" and 10" splashes are sophisticated and sweet. They're fleet, but have warm body so you feel you're getting something for your money.

The thin 18" and 16" Chinas are not unpalatable, and they fare pretty well as rides too. The heavy 18" version is higher pitched and will play hell with anyones tinnitus. One to annoy guitarists with...

Finally, there's the 13" Mega Cup Chime. Looking like something an ancient warrior might wear into battle, it creates a formidable ding wherever and however you attack it. It's also open to beautiful effects, say if played with a soft beater, revealing a mellow drone beneath the sharp ping. A specialist extravagance, but indicative of the wide range of sounds Paiste is famous for.