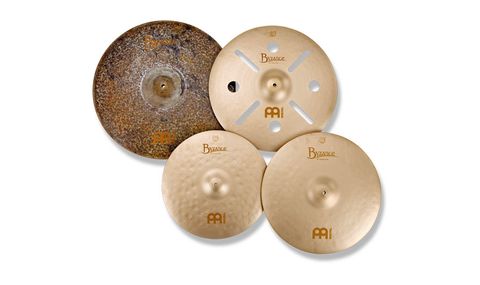 Byzance is home to many of Meinl's more creative designs. As such, all four of these cymbals are beautifully made and full of character.

These four new cymbals are all new additions to Meinl's ever-expanding Byzance range. Three of the four are Byzance Vintage models while the fourth joins the ranks of the Byzance Extra Dry Series.

Byzance Vintage is one of the newer sub-series (currently six in total) which make up the Byzance range. Initially stocked with Benny Greb's signature Sand models, it has since become home to Byzance Vintage Trash crashes and now the new Vintage crashes reviewed here.

Common to all Byzance Vintage cymbals is the sandblasted finish which Meinl pioneered over a decade ago on its (since discontinued) Custom Shop Series. Sandblasting gives the cymbals a semi-matt lustre not unlike the decades-induced patina found on roadworn cymbals, minus the usual accompanying impregnations of sweat, beer, tobacco smoke and who knows what else.

The two new 16" and 18" Vintage crashes on review are from a set of four that also include generously proportioned 20" and 22" models. While bearing some similarities to Vintage Sand crashes - they're thin and are plastered with wide hammer marks - the Vintage crashes have comparatively flatter profiles and smaller bells.

The 20" Vintage Trash crash joins two 16" and 18" versions (reviewed in Rhythm last year). Like the existing Trash crashes, the new cymbal is super thin and features a total of eight round and cigar-shaped cut-outs to crank up the trashiness and rein in the decay.

Alongside the Vintage Series offerings, the 22" Extra Dry Thin ride resembles a recently unearthed ancient relic. Raw and completely unlathed, the cymbal is cratered with hammermarks while pools of discolouration trail randomly across its surface. As the hammering is applied entirely by hand, no two cymbals will be alike.

The first word that comes to mind when hearing the Vintage crashes is, aptly enough, vintage. Their thinness and extensive hammering means that they operate at the dryer and darker end of the cymbal spectrum.

Treated as a straight crash, both cymbals come to life elegantly, shimmering with silvery trashiness before fading to a warm afterglow. They are such interesting cymbals that simply bashing out accents overlooks their finer qualities.

Show them a mallet and they respond with a delicate, slow building and eventually glorious crescendo. Playing them with the tip of the sticks brings a raspy 'tah' that sits clearly above a semi-crashing wash. The note is so alluring - especially on the smaller cymbal - that we find ourselves repeatedly keeping time with it.

If using a 16" crash as a ride cymbal sounds a little quirky then it's a good illustration of the amount of charm and tonal eloquence on offer. Forget power and projection, these are cymbals that draw you into them and invite you to explore all aspects of their sound.

On appearances alone, the 22" Extra Dry ride suggests a cymbal strong in flavour, rich in articulation and full of nuance - and it doesn't disappoint. Low pitched with a dark and smoky wash, it's as tangy as a hunk of sourdough bread topped with mature Stilton.

The stick sound is well defined - where lathing smoothes and shapes a cymbal's response, the rawness here provides a direct, almost primal connection to the bronze. Reaching for the bell finds the sound pulled further into sharp focus. The ever-present wash is laced with hidden depths, which rear up into gongy convolutions when the cymbal is crashed. It's a complex and highly individual ride that is as inspiring to play as it is to look at.

Tonally, the 20" Vintage Trash crash has much in common with a china, but the overall effect is less aggressive. Where a china is unmistakably abrupt, the Trash crash has a smoother entry, opening more in the manner of a crash.

The cut-outs accentuate the trashiness, making it cut through with a good deal more intensity than a regular crash. This ambiguous nature means it could be used quite frequently without diluting its impact.