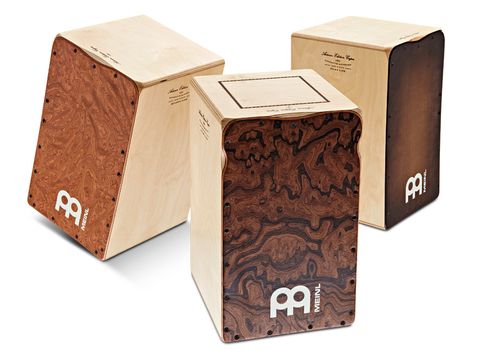 Always forward-looking, these Artisans are a particularly fine testament to the company's continuing success.

Meinl really has dominated the marketplace over recent years with its simply staggering catalogue of quality cajons.

The company has a comprehensive choice that covers beginner and junior models right up to professional instruments - as well as some highly innovative new design twists on the humble box-drum. Meinl's attention to detail throughout its entire catalogue has won it legions of fans, and if that wasn't enough it now offers these hand-crafted Spanish-made Artisan Edition cajons.

"Volume will certainly not lack in any of the Artisan Edition cajons when needed, and all go from whisper to roar with ease. "

The three cajons we have here all possess exactly the same dimensions (48cm high, 28cm wide and 29cm deep) although have quite different characteristics.

The reasonably priced Solea features a nine-ply birchwood body in a matt-satin finish and the tapa (or frontplate) is made of solid cedarwood, which is finished in a classy Espresso Brown Burst. To the rear of the frontplate you have 10 pre-tuned (non-adjustable) guitar strings that lie horizontally along the top third of the cajon.

As with all three models the birch surround has a slightly concave design where the frontplate makes contact and this is said to enhance the instrument's fundamental tone.

Another neat improvement on all three models is the inclusion of four beefier screws and washers on the frontplate in the bass tone area, 17cm from the top of the cajon. This in effect strengthens the area typically given the heaviest strokes and could thus prolong the life of the frontplate.

The four minuscule rubber feet are made from a special formula that Meinl says helps in preventing vibrations from your strokes transferring to the floor - and we can see their reasoning.

The Buleria model is a slightly more costly option that has many of the same features as the Solea but with an exotic Lava Burl frontplate, and the significant benefit of two tuneable five-string snare sets.

The Seguiriya is the new flagship model for Meinl and as befits the hefty pricetag really is a fine creation. The surround is noticeably heavier with 11 birch plies, a particularly cool Canyon Burl frontplate, attractive wood inlay motif on the seat and comes equipped with no less than 16 adjustable vertical guitar strings.

It doesn't have the bass filter as with the other two but comes with an additional internal sound-port ring, said to compress the tone of the cajon as it exits the rear sound hole. Both the Buleria and Seguiriya have an ingenious fine mesh across the inside of the sound hole, which acts in a similar way to a microphone pop shield when you mic the cajon from the rear.

The Solea and Buleria cajons have sculpted internal bass filters that compress the sound - and this focuses their response really well. Volume will certainly not lack in any of the models when needed, and all go from whisper to roar with ease.

Our first impression was one of great dynamics and clarity across the spectrum with warm, musical tones, great 'snare to tone' ratio - and extremely comfortable to play for extended periods.

The sculpted top to the frontplate makes playing feel really tactile (the Seguiriya has two more on its sides towards the top). This gives the drums a unique look and somehow gives them a 'unified' playing vibe with the surround melding into the frontplate.

The Solea has a warm tone and great bass tone, good mids and crisp slap results. The snare sound is quite full but as they're non-adjustable it may or may not be your cup of tea.

The Buleria takes all those full tones and turns things up a notch, with adjustable snares meaning you can tailor it to your own tastes. This is a beautiful sounding cajon that doesn't disappoint in any way - and of the three arguably represents the best value for money. Rich bass tone and highly articulate mids and highs combine with the impressive Lava Burl frontplate to great effect.

The Seguiriya has a sublime spectrum of highly musical tones and you'll definitely be smitten within a couple of minutes of playing this beauty. The mid to high ranges are exceptional and its myriad of musical tones are quite breathtaking.

In short, it's one of the most musical cajons we've had the pleasure of playing, and if your budget stretches then snap one up - but if not then the other two are also well worth trying.