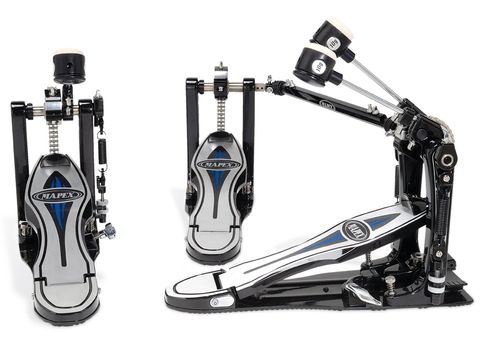 Pearl's Demon Drive pedal is more complicated, daunting and expensive, although a fabulous piece of engineering. The Falcon is simpler, more accessible and intuitive. And like Tama's Iron Cobra and DW's 9000, it's a pedal that many drummers will, we're sure, come to love.

Mapex takes a big step forward with the Falcon single (P1000) and double (P1000TW) bass drum pedals. They don't replace the previous P950A/P980A, which stay in the catalogue, but instead they represent a new level of pedal sophistication for Mapex.

First impressions: this is a sexy, sleek design. All the black metal parts are sprayed to a car-like plastic-shiny finish. This contrasts with the brushed silver of the footboard which has a narrower waist than most and thus appears longer. The board has a chubby, adjustable toe stop and is linked to the cam action by a double chain, which is nickelplated like the chains used in pro touring bikes.

At the other end, the hinged heel plate has sealed steel bearings which eliminate lateral rocking movement. The whole unit is set on a full black base-plate which has a 'Suregrip' rubber-covered bottom and adjustable spurs. If that's not enough grip you can add a detachable 12cm x 2cm metal under-plate which has a Velcro strip.

"The slim footboard is great for pulling your toes half-way down the board and stomping. It almost wills you to play faster."

The pedal attaches to the bass drum hoop via the (patented) Talon clamp. This has a rocker bar underneath so that if you like to set your bass drum at a rising angle the clamp will accommodate the slope without stressing the hoop. You can also adjust the 'bite' of the jaw clamp for a thinner or fatter hoop.

The attaching screw is a big chromed wing nut, positioned on the right side and some way back so it's relatively easy to reach even from the sitting position.

Structurally, Mapex says frame strength is increased by the elegant silver steel insert in the side posts. One innovation is the actual drive shaft - the horizontal rod on which the cam and beater turn - which is machined from 'inox' (inoxydable), a fancy word for stainless steel. This is a hollow tube which you can see right through from one side to the other on the single pedal. Mapex claims it reduces the overall weight and drag.

Another interesting feature is the suspended spring tension assembly, unusually supported by rocker arms top and bottom - although we're not sure what advantage this offers. As with some other pedals there's a choice of cams - just two to keep things simple: a 'glide' cam which gives "equal inertia from the beginning to the end of each stroke", and a 'pursuit' cam for increased power.

The double pedal linkage is adjustable at both ends of the drive shaft, which is handy, and the double beaters (reversible felt and hard rubber) are spaced to strike equidistantly from the centre of the head. Both footboard and beater angles are individually adjustable with ease and the left pedal has all its own independent adjustments.

First impressions: silky, silent, smooth operators. Mapex's Falcon video makes a big thing of the lightness of the pedal. Well it's not light, it's rather heavy - it's the feel that is light, which is more important. Endorsees line up on the video to say how, straight out of the box, the pedal felt great.

Well, for once we agree. We just clamped the double pedal to a practice kit and yes, both pedals felt terrific, balanced, squeak-free and fleet.

The response from the double chain drive was instantaneous, no lag or wobble, and eerily quiet. One endorser says he 'forgot' he was playing them. Swapping cams takes a couple of minutes involving two grub nuts, and while you're at it you can easily adjust the beater and footboard angles.

Meanwhile, trying out the three different beater rod weights - 0gm, 10gm and 20 grams (interchangeable using the supplied Allen key) - takes seconds. And you really can feel the difference. One smart suggestion is to practise with a heavier weight and swap to lighter for performance…

Now we'd like to say here that we clamped on the pedals and launched straight into page 100 of Derek Roddy's Evolution Of Blast Beats. We'd like to say that, but we'd be lying… how on earth does he play that stuff?

What we can say is that for heels-up playing - which is, face it, the way most rock drummers play most of the time - the pedals are ideal. The slim footboard is great for pulling your toes half-way down the board and stomping. It almost wills you to play faster. While for heels-down we found if we shoved our toes up under the stop our average size 9s (43s) sat perfectly on the heel plate for comfort.