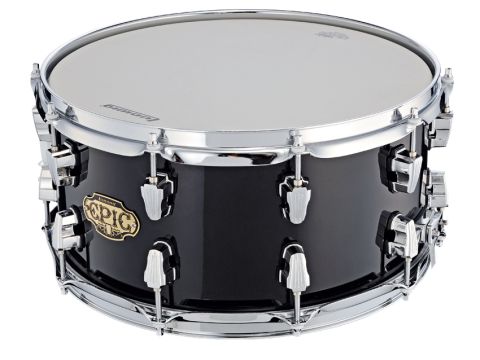 The Brick is a winner - it looks slick, sounds terrific and is affordable.

Although it's the cheapest of Ludwig's new snares (check our reviews of the Corey Miller and Joey Kramer signature drums), The Brick has thick black gaskets under its lugs where the other two tube lug drums do not.

The throw-off is a familiar generic model - it's solid and works a treat. But could Ludwig not have at least put its name on there somewhere? It rather cheapens an otherwise typically impressive Ludwig snare.

Even after a lifetime playing metal shell snares, The Brick may tempt you over to wood. It's as lively as most metal drums but with a woody tone, the result of having such a thick shell and it being birch.

Where metal shells have high-pitched rim-shots, wood ones have a reverberant woody clonk. And The Brick has a clonk to die for. There's no choking; it just continues to open up the harder you play.

This is a fantastic drum - it has warmth because the shell is deep and brilliance because it is thick. The ring on rim-shots had some overtones that turned nasty with the batter turned down. This is where it's tempting to resort to a spot of damping or, better, pay extra care to even tensioning. But tightened right up again, it simply sang.