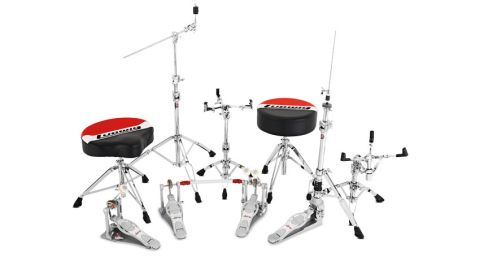 Some of the best hardware we've ever seen. The Pillar Clutch snare stand and hi-hat are innovative, the rest ingenious and functional. If it's good enough for Vinnie Colaiuta...

Ludwig's original flat-based Atlas hardware was a fixture of the 1960s before the arrival of Appice and Bonham motivated the company to toughen up.

Let's start with the hi-hat, the most unusual item in the range. It's a twin leg design, which leaves space for your other pedals. Where it is radically different is in the mounting of the footplate and the drive action.

The base is a massive casting housing a double chain-drive which operates rather like an upside-down bass pedal. As you depress the pedal the short chain moves over an inverted cam. Ludwig calls this 'Progressive Action Linkage', which "transfers from speed to power as the pedal moves through the stroke".

The footboard itself is hinged at the heel to a cast tray which forms a tripod with the two legs. Since it is lifted off the floor where it joins the centre casting this "centroid three-point stability system" is more stable than other two-leggers.

The cymbal tilter is also a new design, with the bottom cymbal resting on the so-called Aerodisc, which you simply rotate until the cymbal is at the desired angle and then lock with a drum key.

Next we have two snare drum stands, the Pro II and the Pillar Clutch. Both these, and the boom and straight cymbal stands, benefit from Ludwig's Aerodyne, gearless tilter. The single and double bass drum pedals have stabilising base plates, handily clipped-on drum keys and flexible, non-damaging hoop clamps.

Rounding out the set are two thrones/stools which have corkscrew height adjustment and a choice of colourful saddle or round seat.

This is seriously heavy gear, particularly the hi-hat. Setting it up is unique and has prompted Ludwig to release an explanatory video with Ludwig's Josh Allen and Kevin Packard taking you through the functions and set-up of the hi-hat stand. Search 'Ludwig Atlas hi-hat stand' on YouTube.

Basically you grab the footplate while latching a pin into a hook on the base. There's a five-position spring tensioner, and the double-chain cam drive gives the pedal a strong, smooth operation which, as a bonus, matches the feel of the bass drum pedal.

Setting up the double bass pedal is more familiar and caused no problems. Both footboard and beater angles are separately adjustable simply by locking a drum key nut, then it's down to how tight you like your springs.

The auxiliary pedal link drive is aircraft-grade aluminium with no discernible lag in the left pedal action, everything feels well balanced and beefy. If you like a particularly high footboard angle you can swap to a shorter chain drive.

We gigged the single bass pedal twice and loved it, the medium density felt beater producing a noticeably fat and rounded thump. The sharp ribbed surface of the aluminium footboard is not so good for sliding on, but good for grip.

Ludwig's big news with the two snare stands is the Aerodyne dual-axis gearless tilter. Dual-axis means the tilter rotates not just up and down but also side-to-side. Brilliant. And gearless means infinitely adjustable so you can achieve the position you really, really want rather than the usual compromise of a toothed/geared ratchet.

We never imagined describing a snare drum stand as sexy, but the Pillar Clutch model with its sensuously curved, lavishly chromed basket arms and minimum contact rubber grippers is a stunner. Still, the heavy detachable snare basket is a little tricky to handle when slotting onto its pillar clutch - the folding arms flail about loosely, but once tightened the vice grip clamp does what it says.

All three arms are readily adjusted for length, accommodating snares (or toms) all the way from 10" to 16". Both snare stands have clever minimum-contact rubber grippers which just lightly caress the shell, allowing unimpeded resonance.

Finally, the two generously proportioned thrones are luxuriously cushioned in high density foam. Rhythm's not-inconsiderable derriere was dwarfed by these ample seats. The saddle tends to grip as you sink into it and we preferred the freer, rounded seat which you can sit on the edge of.