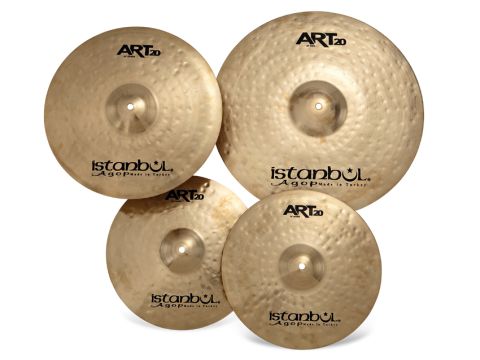 Istanbul's first stab at the budget B20 market offers quality and refinement.

The very name Istanbul conjures up everything that is authentic and traditional in cymbals.

The company was founded by Agop Tomurcuk, previously the foreman at the legendary K Zildjian factory in Istanbul, Turkey. For over 30 years Istanbul has produced musical cymbals that have appealed first to jazzers and, as the ranges expanded, to rockers also.

"If you're upgrading from a first budget set of cymbals the ART20s will be a joyously positive experience."

Starting with traditional hands-on production values Istanbul has gradually modernised its image. But like most companies it now feels the need to pursue the budget market as well as the top-end - previously dabbling in the B8 'sheet' bronze market with the A.R.T. line.

Now we have the ART20 series which is - confusingly - quite new and unrelated. It is a keenly priced series again, but this time made from traditional cast B20 bronze.

The cymbals have the expected muted gold colour of B20 bronze, they are all medium weight and have a brilliant finish with fine lathing on top and underneath. Hammering is over the entire surface except the bell, and you can tell this is a hand operation because the large dimples are irregularly spaced. The hats are identified as top and bottom, with the bottom being a fraction heavier than the top.

If you're upgrading from a first budget set of cymbals the ART20s will be a joyously positive experience. The basic three-piece review set looks totally professional and has none of the caustic-rancid overtones of cheaper cymbals.

In fact the 20" ride is unusually warm and dark. There is though a marked contrast with the bell which is quite sharp, fruity and dingy, with good projection. The ride surface is soft and warm near the edges and as you move nearer the bell a higher, persistent yet harmonious background note emerges, resulting in a full sound.

Despite that soft feel the stick articulation remains perfectly clear and the cymbal responds well to crashing and riding. Because of the low pitch the crash is a really dark whoosh, though it doesn't slow you down.

But to return to that softness and depth of tone, this could prove a slight drawback in some situations, as we discovered in a live scenario. The ride was coping pretty well until earplugs were put in as the volume increased, when, lo, the stick-tip sound all but disappeared.

The bell was still there, but the body of the ride proved too deep and soft, certainly for any dynamic above averagely noisy rock. We reckon it could be too muddy in the overall live mix for some loud music situations, lacking some of the penetration that a toppier cymbal brings

The hats fared better. They too are soft, warm and dark, but being smaller they cut through with a thick, meaty tone. The pedalled 'chick' is not the loudest or sharpest, but opening and closing while shouldering the cymbal edges gives plenty of volume with the advantage that it is not harsh but smooth and harmonious. There is nothing tinny about any of these cymbals.

Finally the 16" crash. This reminded us of Sabian's XS20 16" crash in that it has a thoroughly pleasant tone, but falls a little short on projection and balls. You have to pay more to get a refined-sounding 16" crash that also has power. This one is a bit lacking in initial impact and sustain.

What it wants in volume though it makes up for with sensitivity, it being responsive to the deftest of clips. You could almost describe it as a fast crash.

But we don't want to leave you with the wrong impression. This is a splendid set of sophisticated cymbals, and a monumental step up from your starter metals.

It's just worth remembering that at this price, and because they have a deep tone, you won't quite get that extra pizzazz and oomph that you experience with the very top-flight article.