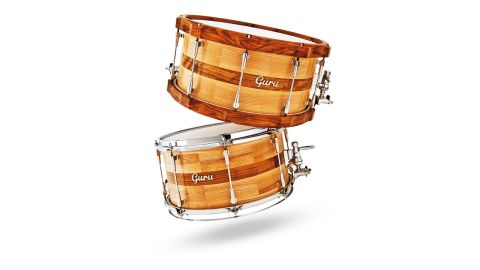 Expensive, yes, but Guru's drums exhibit an uncompromising approach to performance. If you are after a superbly-fashioned drum that features the best of UK craftsmanship, check out Guru.

The term 'guru' means master or teacher. It's appropriate then that these drums come from the masterful workshop of Guru Drums and aim to teach us a thing or two about the current state of the art of drum building.

Guru is the brainchild of Dean Price and Andy Crosby, the former a respected craftsman, and the latter an innovator and experimenter. Guru's philosophy is that sound is everything - and its uncompromising approach to this has led to the company rejecting the 'usual' way of doing things, and instead finding its own path to percussive enlightenment.

The two snares sent to test are from the In-Tense series: a 14"x7" drum that features Guru's handmade Ovangkol rims, and a 13"x7" with standard steel hoops. The shells are constructed using Guru's proprietary segmentation process, which machines the shells with angled shoulders according to the diameter and number of segments in the drum.

The segments are then assembled in layers, with each layer overlapping the next such that joins are always in the middle of the layers either side. Once the glue has cured, the shell is machined to remove the excess, leaving the machined reinforcing rings as an integral part of the shell.

The test drums are made from English ash with an Ovangkol centre band, and are 6mm thick in the centre. The drums are finished with shellac and a hard wax.

Each drum has Guru's own lugs that are designed and manufactured in-house, machined from T6-grade solid aluminium, and ultra-low mass with a view to a minimal footprint on the shell.

Guru says that this approach "places far less stress and weight on the shell than standard lug systems, plus promotes full engagement of the shell across a wide range of dynamics".

The attention to detail is such that even the tension rods are bespoke with a finer thread to promote tuning stability. Guru's fastidiousness extends to the use of bespoke internal fixings made from stainless steel, rather than 'off the shelf' screws.

Being suckers for any wooden-hooped drum, we start with the 14" snare with its machined Ovangkol hoops. Lifting it onto the stand, its defining feature is a lack of mass - its apparent solidity belies its actual weight, which is very much on the light side.

Don't let that fool you, though, this is no mere featherweight, but all part of Guru's masterplan - the ultra-light hardware is designed to allow the light solid shell drums to speak without the excessive damping of heavier shell hardware.

The effect of this is immediately apparent. The 14" has a very open voice, warm and woody - the shell contributes much more to the sound than is sometimes the case - and it has a defined fundamental tone, without excessive overtones.

The wood hoops enhance the sense that the drum is an organic thing that 'breathes' as you play it - without the metallic ring of metal hoops, the sound is all wood. The hoops contribute an amazing variety of cross-stick sounds - a rim click cuts right through, and playing the very edge of the drum with the tips of the sticks sounds almost like a wood block.

The 14" responds well across all tunings, without any sense that the drum can 'choke' at higher tensions. The steel hoops of the 13" give it a more controlled, tighter feeling; the rims contributing a slightly harsher, higher frequency sound to the rimshots that helps it cut a touch more than its bigger brother.

The steel hoops also mean that the smaller drum is happier at higher tensions, though both drums exhibit sensitivity across the range that means they respond as well to a soft touch as a heavier hand.