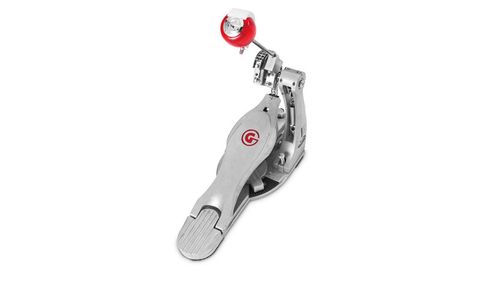 Gibraltar's G-Class pedal is an ambitious addition to the market. Its strong visual aesthetics are complemented by straightforward operation and a cracking performance.

As Nick Moulin of UK distributor Fender explains, "Solving drummers' problems and responding to their needs is what we're good at, and we wanted to find out what was really important to the player. Function, simplicity, aesthetic, feel and weight are all influencing factors of the design."

The finished pedal is, quite simply, beautiful - so it ticks the aesthetics box right away. Single post pedals have been seen before and are usually eye-catching on account of their rarity. However, the way that the G-Class's post arches up in one direction before curving back over the bearing assembly brings a new sophistication to pedal design, a world away from the conventional blueprint of hard angles and military-like detailing (along with faintly preposterous macho names, which Gibraltar has been equally guilty of in the past).

Housed within the post is the spring, which adds to the sleek, uncluttered look of the pedal. A knurled wheel for adjustment is located discretely within the post, above which sits a second slot containing a gauge.

The post is attached to a cast aluminium/ steel alloy baseplate that also contains the pedal's innovative Helix mounting system. An alternative to a conventional wingnut- operated hoop clamp, the Helix system is based around a racheting mechanism that tightens in one small movement.

Fine adjustments can be made at the clamp on the front of the pedal - if required - and once this is done, attaching the pedal to the drum is simply a question of sliding the Helix lever from three o'clock to five o'clock. We have to confess an initial feeling of slight unease along the lines of, 'Is that it?'

Compared with the usual routine of tightening a pedal clamp down, the Helix system takes a fraction of a second - it's almost too quick. Having since gigged the G-Class, we can confirm that it remained glued limpet-like to the bass drum for the duration. Removing the pedal involves flicking in a small release button on the lever and reversing the movement back to three o'clock.

Both the beater and footboard angle can be adjusted independently of one another, while the twin-surface bright red acrylic beater contains craftily concealed stowage slots for up to three weights. The weights are cylindrical and slot into the underside of the beater head. They are magnetic and so don't require any locking down - once slid in, they stay put. Experimenting with all four weight variations (none/1/2/3) finds a surprisingly wide range of feels attainable.

Further adjustment is available in the shape of the G-Drive, a two-position cam. Rather than having interchangeable cams, Gibraltar has devised a single movable cam that, according to its position, alters the characteristics of the action. The cam is mounted on a centre block which in turn is connected to the bearing mechanism.

Adjusting the cam's position is achieved by loosening-off a single tension bolt and moving the cam along the block. Care needs to be taken to ensure that the double chain is properly aligned when retightening the bolt.

With the cam at the back of the centre block, the action is fluid, balanced and suitable for many styles of (non-extreme) playing. Moving the cam to the front of the block brings a more aggressive feel, making each stroke accelerate to accentuate the power. We doubt we need to suggest which sort of player this configuration of the pedal might appeal to...

Whichever tuning of the pedal we tried, underlying the action was a feeling of utter solidity and reliability. Providing a good range of adjustment while keeping a pedal accessible is not easy but Gibraltar has nailed it with the G-Class. Such qualities can only improve a drummer's confidence, and with it their playing.

And it gets better: by the time this review is published, a double version of the G-Class should also be in the shops.