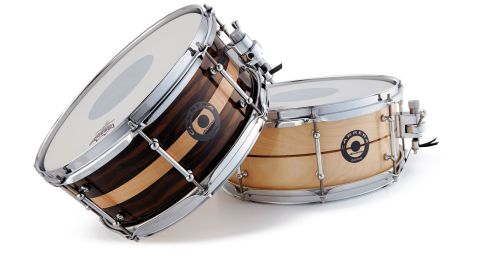 In just five years Carrera has developed into a master drum builder. We were blown away by the construction, finish and sound of these drum.

Since 2009, Dave Carrera has forged a serious reputation for building top class drum shells from scratch in his Uxbridge workshop. These shells form the basis of Carrera Custom drums, and are also supplied to other drum makers, from individuals to companies including Pork Pie. As examples of his craft we have two snare drums from the Custom Pinstripe range.

As Carrera states, "It all starts with the shell." Most companies either buy ready-made shells, or mould sheets of pre-formed two- or three-cross plies. Carrera actually works from single plies.

As Dave explains, "We are one of only a few drum shell makers worldwide who have their own in-house veneer presses allowing us to make our own two- and three-ply panels. We then cut each panel to length by hand, and lay the shell in our moulds."

Carrera can supply birch, maple or Bubinga and all sorts of exotic veneers. Both review snares are 14"x6" shells, one in Rock Maple, the other in Ice Birch. "When we buy our birch veneers, some have this extreme figuring in the grain, known as Ice Birch, a rare version of Finnish birch."

So the first drum has nine plies of Ice Birch to which is stitched a further outer veneer of Ice Birch with a thin (3mm) 'micro' Pinstripe of ebony. The other drum has an eight-ply core of Rock Maple with an inner veneer of Curly Maple and an outer consisting of ebony, with a wider central Pinstripe (25mm) of Curly Maple. In both cases there are 10 plies each of 0.6mm, making both shells a thin 6mm.

The Pinstripes are not inlaid, which is what many companies do. In Carrera's case the outer layer is achieved by butting up three individually cut veneers - top, bottom and the central pinstripe band. Carrera:

"The outer veneer is stitched by hand then sealed as the first ply layer of the shell, so it is part of the shell's construction, not cut out afterwards."

The shells are finished in hand-rubbed oil with a wax sheen, or in a high gloss lacquer (which takes longer and is more expensive). The review drums have a superbly applied lacquer with a waxed inner.

Each shell is personally signed and dated inside by Dave Carrera. Although thin, these two shells are almost perfectly round and the 45° cut-back, 'Head Matched' edges are outstanding.

Customers can specify shell size and pinstripe lay-up, even multi-pinstripes, and in any of the woods Carrera stocks (including maple, birch, mahogany, oak, beech, black walnut and Bubinga). The Carrera 'badge' is an airbrushed logo under the lacquer, so there is no extra metal placed on the shell.

The metal work is inevitably generic, with 2.3mm triple-flanged hoops and chromed steel tube lugs. Carrera has sensibly fitted the top class Trick multi-position throw-off with the Carrera logo laser-etched on both the throw and butt sides.

With thin shells and eight (not 10) tube lugs, these are pretty lightweight drums. The lugs also minimise any shell constriction so that resonance is maximised. Thin shells naturally produce darker, reverberant tones, while the sharp bearing edges pinpoint accurately articulated sound, aided by the properly cut snare beds and the exacting Trick tensioner.

Starting at medium-low tension on both top and bottom heads we couldn't detect a great difference between the two drums. They both sounded glorious from the off, the looseness merely accentuating the uncluttered, unfettered tone of the shells.

The sound of both drums is versatile. There is a controlled ring to the rim-shot 'clonk' that rises and settles in a perfect arc, devoid of harsh overtones. Whether tuned high or low the snare wires provide a rich response - so the drums never turn boxy (tuned high) or hollow and empty (tuned low).