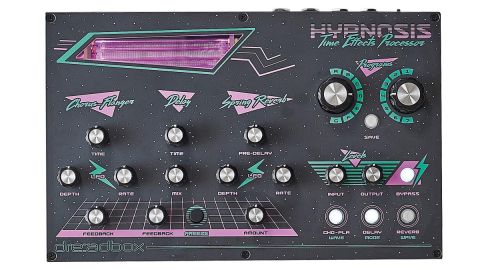 A characterful box of delay and reverb, great for spaced out vintage synths and bass

Greece’s Dreadbox are known for their desktop synths, having focused lately on releasing multiple iterations of their well-regarded NYX, Erebus and Hades instruments.

They also have a great back-catalogue of effects though, including numerous stompbox and Eurorack processors, as well as the onboard effects on their synths. Hypnosis is their meatiest effect so far though: a stereo analogue multi-effect combining a chorus/flanger, delay and spring reverb.

The unit itself lives in a metal desktop box adorned with a retro interface like something out of an ’80s arcade, leaving little doubt about the era it aims to replicate. A panel to the top left of the interface offers a window onto the unit’s three-spring reverb tank, backlit with a purple/pink hue that pulsates to act as an input monitor – making Hypnosis look cool.

There’s not masses by way of I/O here, just a stereo pair of jack inputs, outputs and the power input. With no input for MIDI, CV or a foot pedal, there’s no option for external control or sync – so all effect manipulation is done via the front panel controls.

What you do get, unusually for a Dreadbox product, is an onboard patch memory for saving up to 49 presets split across seven banks.

The flanger/chorus is the first processor in Hypnosis’s signal path. This is an analogue BBD-generated effect with controls for delay time, feedback, plus an LFO with rate and depth controls. The delay ranges from 2.5ms, resulting in a tight flange effect, to 50ms for chorus or short delay. The feedback control can be pushed up to the point of creating comb filter-style effects too.

The LFO here has three wave shapes – triangle, sine and random –selected via a secondary button press that isn’t labelled on the control panel; it’d be easy to miss for those averse to reading the manual. The LFO speed ranges from 10Hz up to 15 seconds, set manually via the front panel rotary. With both stereo outputs engaged, the LFO is reversed on the left and right channels, providing an offset between the two that creates a widening effect.

Next in the chain comes the delay, the only digital element of Hypnosis’s processing path. There are three modes available here, offering clean, BBD and tape-style delays. Again, the selection of these modes is hidden behind an unlabelled secondary button function, so you’ll need to rely on memory or the manual to know which mode is which.

There’s decent sonic variety between these modes, even if there’s not masses of control over the parameters of each; users get front panel controls for delay time, feedback and wet/dry mix, but nothing for tape wow and flutter or tone and EQ of the feedback loop.

What is included is a Freeze function, for infinite looping of whatever is currently in the feedback loop. This works great for creating extreme ambiences and drones, particularly combined with the reverb.

When both of the stereo outputs are in use, the delay will always operate in ping-pong mode. While this sounds great in the right context, it’s a shame not to have a few other stereo options here. A more subtle dual delay mode would work particularly nicely; given that the chorus/flanger can add a nice, subtle widening effect to mono material, it’s a shame the only option when it comes to stereo delay is full-on ping-pong or nothing at all.

The spring reverb rounds off the chain of processors. Here Hypnosis offers amount and pre-delay controls, along with another LFO for modulating the pre-delay time. As with the chorus/flanger, the LFO has sine, triangle and random modes (selected via the same button press) and a rate from 10Hz up to 15 seconds.

Note that the reverb itself is mono, so when Hypnosis is in stereo mode, although the dry signal remains stereo, dialing in the reverb introduces identical wet signals to the left and right channels, effectively reducing the stereo width. While this may sound impractical on paper, the effect it can produce actually sounds cool – essentially modulating the stereo image as you adjust the ‘size’ of your sound using the reverb.

The reverb itself sounds great – washy and a little gritty, as you’d expect a classic spring reverb to be. It can be driven hard fairly easily and modulating the pre-delay can create a wonderfully unnatural ambience.

As you’d expect, it’s when multiple effects combine that Hypnosis really comes to life – mixing churning chorus with long, spiraling delays and sending sounds into a dark hole of reverb. It lives up to its retro styling well, creating a thick, drifting effect; great on synths for sci-fi basses and chord progressions.

It’s held back by a few omissions; more delay modes would add to the flexibility, and while the manual-only timing control suits the vintage ethos, a simple tap tempo or pulse sync input would be very useful for live performers. Even accounting for that though, this is a characterful and impressive box of classic effects.

MusicRadar verdict: A characterful box of delay and reverb, great for spacedout vintage synths and bass.