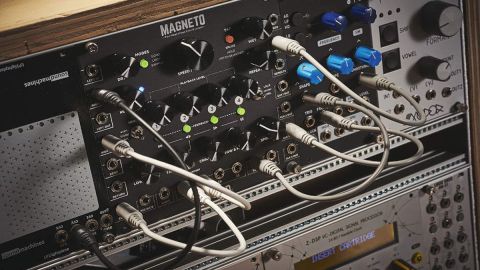 This doesn’t disappoint as an effects module but it fulfils so many other roles that any patch would benefit from it one way or another.

Strymon is a well known purveyor of high-end effect boxes, with its Big Sky Reverb and Timeline Delay at the top of many musicians wish-list.

At NAMM in 2016 it unveiled its first prototype Eurorack module, a four-head tape echo simulation called Generalissimo. This caused a lot of excitement, but the prototype also caught some criticism for its lack of CV inputs. Two years later, the module has finally been released under the name Magneto and Strymon has not only listened on the CV front but has also expanded the module beyond a standard delay with new Looper and Phrase Sampler modes.

At 28hp and nearly £600, the Magneto is a big, expensive module at a time when the trend seems to be for fewer and fewer hp. Behind the panel it’s just as large with five separate circuit boards, it was quite a job just getting it into our case. So does it justify the price tag and the real estate?

It’s well laid-out with a nice big central tape speed knob, although the Wet and Dry knobs are tricky to turn when the unit’s fully patched. How does it sound? Well the Magneto’s processor-intense dTape algorithm delivers bucketloads of character, with audio quality ranging from high-fidelity down to crinkly, warm and wobbly. Tape delays were the original echo boxes, invented in the ’50s, and loved ever since for the warmth of the tape saturation and the organic sound and chorusing effects caused by the subtle variations in tape speed. On the Magneto, four dedicated controls are available to adjust these tape mechanics. A low-cut or high-pass filter is first, in case you need to roll off the bottom end.

Tape age acts like a low-pass filter: the older, the less high end. Crinkle affects how knackered your tape sounds. Wow and utter controls tape speed fluctuation. The speed knob affects how much these controls alter the sound: the slower the tape, the greater the effect. The record input level can also be pushed into saturation which ranges from warm rich tones to gritty distortion.

Setting the feedback repeats level to maximum and tapping a really short delay will send the Magneto into self-oscillation. The module will settle on whatever frequencies allow it to self-oscillate based on the delay length and the filtering provided by the tape age control. These chaotic oscillations are rich in organic character and make for some great eerie drones. Turning on the quantised mode allows you to play harmonically by sending v/Oct CV to the speed control. The four-tape mechanics controls can then be used to further shape the tone. If you need more stability the infinite hold button will loop the current waveform, creating a wavetable oscillator. If you then send an ADSR envelope to the wet input you can shape the sound before it hits the built-in spring reverb.

The clock input or tap button can be used to set the delay in quarter notes. This tempo sets the position of tape head 4 with the other three heads spaced at intervals. These can be switched between even, triplet and rhythmically-shifted spacings. Each delay head has a feedback button to send its signal back to the record head, with the repeats knob controlling overall feedback level.

There are three standard panning modes for delay heads, two varieties of ping-pong and a centralised psycho-acoustic stereo mode. An expert mode also lets you set the panning independently for each head.

The Feedback buttons double as transport controls letting you Reverse, Start and Stop the tape. The time the tape takes to fully stop depends on the speed knob, and some great slow-down effects can be created this way. There’s also an infinite button that continuously loops the most recent delay cycle.

Before your repeated audio hits the output, you can treat it with the built-in spring reverb simulation which predictably sounds beautiful. The reverb’s gain structure is designed to sound smooth and open with moderate input levels becoming trashy and lo- when pushed hard. With spring control fully open it gives a big reverb, far larger than any spring tank we’ve heard. The reverb effect can also be used independently of the tape delay and the module can be switched into a dual mode giving you a separate mono tape delay and a mono spring reverb.

The send/return jacks can be used to insert other effect modules into the signal chain. We tried a few different distortion and bit-crushing modules to roughen up the delays, and played with the Mannequins Three Sisters filter, dynamically filtering the delays, and then using the return as an extra input to bring its self-oscillations in and out of the mix.

The second mode is a sound-on- sound looper, head 4 is the main playback head with 1-3 still available for delays. The tap button is used to record a loop, the repeats mode controls how many times it plays, and additional splices record on top. Altering tape speed while recording lets you build multi-layered textures. Once your loop’s recorded, use the speed knob to scrub through while the tape’s paused.

The third mode is the phrase sampler and, again, the tap button controls recording. This can bring tape flavour to any of your synth patches. Once your root note is recorded, v/Oct pitch can be sent to the Speed CV In and the Wet control can be used as a VCA to modulate sound before it hits spring reverb. There’s even a Quantized mode with 15 scales and a two octave range on the tape speed knob.

This doesn’t disappoint as an effects module but it fulfills so many other roles that any patch would benefit from it one way or another.