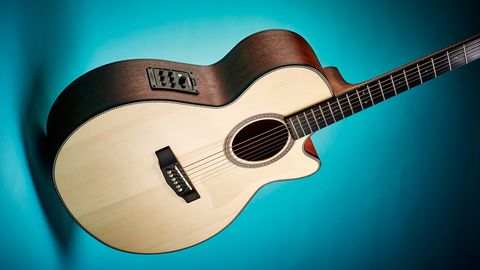 An intriguing new take on the grand auditorium electro format, with mixed results.

It’s always interesting when we discover an unfamiliar name in guitar, especially one with a back story involving “the ancient castle of Dowina... situated on the junction of the rivers Danube and Morava”.

The company’s tagline of ‘the ancient spirit of wood’ further underlines its mystical outlook, but its product line is built on solid, tangible foundations.

The Slovakian brand designs and builds its guitars and bow instruments locally, sourcing tonewoods far afield from Alaska/West Coast USA (spruce and cedar), but also keeping things European with the selected spruce from the Dolomites in Italy that we find on this guitar’s top.

This grand auditorium model (in essence a dreadnought with a narrower waist) forms part of the extensive Rustica branch of its entry-level Antique series with laminate back and sides construction (the pricier Vintage and Master series are all-solid).

Despite the unusual roots of Dowina there’s no denying the brand is embroiled in an acoustic market that’s never been more fiercely contested when it comes to value for money. So let’s find out what it’s offering here...

First impressions are positive. The Dolomite spruce gives the satin top a bright and contemporary look, very nicely framed by an arrow pattern to the purfling. The satin feel of the neck is also a major plus - instantly comfortable like a favourite pair of jeans. It’s great to see an ebony fretboard here, especially when it’s well-finished and complemented by the unexpected rubber-textured black machineheads.

Grand Auditoriums can benefit from lighter-gauge strings more than dreadnoughts, but the D’Addario EXPs feel a little on the heavy side here, with a medium action and tension taking the action up too high for comfort. But could be potentially fixed with a string change and truss rod tweak.

Tonally, things are positive too; a rounded, clear voice offers good balance. Solid rather than spectacular, yes, but the lows are meaty and the mids muscular. The onboard Presys+ system allows you to tailor things behind the three-band EQ when plugged in too, and even with it all dialled flat this is an impressive plugged-in performance; a woody roundness is represented rather than harsh compression.

There’s a trend to keep preamp controls minimal and subtle these days, but this is a clear case against that as it makes our Sigma dreadnought’s lower-key Fishman Sonitone sound dull and limited by comparison.

It’s the Preysys’s impressive performance and control that could be the vital selling point here. Yet in a crowded marketplace, the mix of decent and unusual features may not be quite enough to lift this guitar into a must-try.