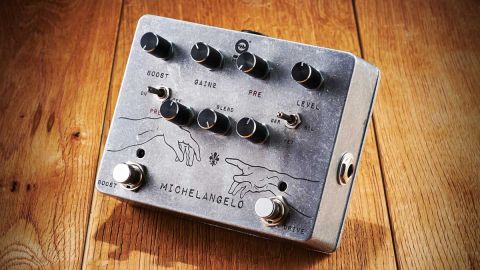 The Michelangelo Overdrive Plus is a formidable boost and a deep source of warm, musical gain. It isn't cheap but this is overdrive elevated to an art form. Its namesake would approve.

The Michelango Overdrive Plus is a high-end overdrive pedal from the Italian boutique effects company Dophix, and it uses vintage 1970s JFET transistors to emulate the dynamic response of a valve amp.

Dophix position it is a super-sweet gain stage that you could run as an overdrive or an independent boost, but via its triple voicings, its blend control, EQ and clever switching, there’s a whole lot the pedal can do – right up to some borderline nuclear silicon and germanium fuzz tones.

The circuit boasts three distinct diode voicings, with silicon, germanium and FET selectable via a three-way toggle switch. The boost has its own independent footswitch and a toggle switch that allows you to position it before or after the gain stage.

There are controls for the level of Boost both before and after the drive section At zero, these are taken out of the output signal entirely. Gain2 sets the amount of distortion while Level sets the output volume of the drive circuit.

The drive section can be further tweaked by two EQ knobs, B and M, with B handling low-end and M the high-end.

In this golden age of effects pedals, will the Michelangelo Overdrive Plus be the High Renaissance moment we’ve been waiting for?

If this is going to be overdrive as high art then you should know it doesn't come keep and you're going to have to wait for it, as these are built to order in Firenze and will take around 30 days to reach your pedalboard.

But we think it will be worth it. There is a lot going on with the pedal but there's no great mysteries as to what is doing what. The three-way diode switch lets you change the character of the gain, the Gain2 control the amount of it and the level the output.

• Keeley D&M Drive and Boost
Stick one of these between your guitar and amp and you won’t be disappointed.

The M and B EQ controls offer just enough control over your sound but this is all about finding musically inspiring levels of gain and volume, and injecting some of pseudo valve-amp dynamics and overdriven hot sauce into your signal. And that can be a mightily addictive flavour.

You can run it with straight-up sparkling crunch or select the germanium or silicon modes for a more saturated, almost fuzz level of gain. If you enjoy the harmonically rich environment of a valve amp that's gone volcanic – and who among us doesn't? – you'll have great fun on the outer limits of the pedal.

But there are all shades in between. And with the footswitch and toggle-switch options for the boost section allowing you to select preamp boost or output boost or both adds another facet to a pedal that is something of a no-brainer if you're looking for a sophisticated boost/overdrive/distortion that's helluva practical, too.

MusicRadar Verdict: The Michelangelo Overdrive Plus is a formidable boost and a deep source of warm, musical gain. It isn't cheap but this is overdrive elevated to an art form. Its namesake would approve.

Pedal of the Day