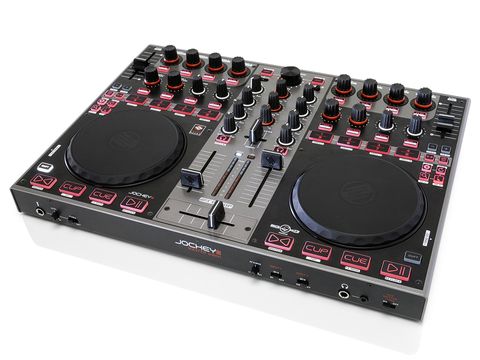 There's plenty to love, but depending on your DJ style, there may be a few important oversights.

So how does Reloop intend to trump the competition? On opening the box the first thing you notice is the build quality. It's very nice, and heavier than you would anticipate.

Metal casing and back-lit rubber buttons with a satisfying click when pressed, similar to those on Denon CD decks. Pots and encoders also feel robust and well placed.

In fact, for so many controls on a relatively small unit, it doesn't feel particularly cramped to use at all. The larger, clickable trackbrowser rotary works fantastic with a single push pulling the browser window open in Traktor, then loading a track by hitting the button associated with either the left of right deck.

The Jockey III can take control of four decks in Traktor plus the sample decks, but only has controls for two decks at once. Switches at the top of the unit allow you to jog between deck A and C, or D and B, plus you can assign a channel to one of physical analogue phono inputs, allowing you to control Traktor with Deck A and an external CDJ or turntable with the other side of the mixer.

Unfortunately, the Jockey III doesn't offer timecode within the box so to use turntables as DVS will still require an extra box. A booth output is also present on the Jockey, making the NI S4 look a bit silly in comparison as it doesn't have one.

There's a one knob filter but it lacks a kill feature, so filtering may be better as part of the effects section, which is a shame.

Effects control is really nicely done here, with four endless rotaries that are lit to show their position and can be enabled by either a push button below the rotary or by holding in the rotary itself for instant kill when you let go.

This is perfectly implemented in the hardware and in the mapping. To have the ability to push down the rotary to enable the effect, turn it while it's held down to tweak, then release the rotary to kill the effect is DJ perfection.

One problem arose when assigning bank one or two of effects to the active deck, no corresponding reaction happened within Traktor, so even though effects were being enabled and disabled there was no indication of this in Traktor or on the hardware - this is a bug that certainly needs fixing.

Using Traktor's sampledeck feature with the Jockey is fine, but probably not as fluid as you would hope. Switching between decks and remembering where you are mid mix can be confusing and the labelling is hardly intuitive.

It would have been nice if when flicking between A and C or B and D the backlight changed from red to green for instance. Some of this clumsiness has to be put down to Traktor's software though too.

The main selling points for the Jockey III are the price for the features, build quality and extensive audio features over the competition. Small things like the ability to adjust the physical drag tension of the jogs is a tidy bonus.

If you're looking for a track to track DJ set up that has the room to expand into the advanced features that Traktor offers, this is great value. The most disappointing thing is that, it needs quite a few mapping tweaks to get it working the way you want.

As soon as you get to the effects, sampledecks and more, you'll begin to find little hurdles with this device. But, its value for money cannot be denied and there isn't another controller we can say that's hands down plug and play perfect.

So, maybe a firmware update and some mapping tweaks down the road, Reloop may have an incredible product on its hands.