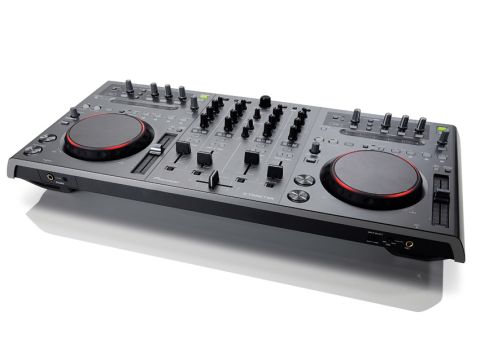 An effective and powerful controller but one that lacks the future-proof features that would justify the price.

Despite the CDJ-2000s offering full Traktor control over HID, and Traktor Scratch allowing you to get your hands on Native's pride-and-joy using the industry standard DJ booth regular, it was almost inevitable that Pioneer would join the dedicated controller party.

Over the past year we've been graced with a shift in the approach to DJ controllers and more and more companies are opting for the large, bespoke software specific units, either mimicking what you see on screen or sticking to a traditional layout.

The excellent Glanzmann Digital DJ Solutions 4midiloop has its feet planted firmly in the former category while NI's flagship Kontrol S4 gives you clear control of a specially made software version. Pioneer's DDJ-T1 falls somewhere in between with a classic layout and familiar components joining forces with Traktor-specific features.

Familiarity is in fact the strongest aspect Pioneer have got going for them with the DDJ-T1. The jogs, cue and play buttons and general design replicate that of their industry standard booth equipment.

Though it might seem odd that Pioneer are pitching this as a bedroom or house party device, it actually makes sense as what you learn on at home will be familiar if you have to make the move to CDs or USB sticks in the club.

The result is instant comfort for anyone who's used CDJs coming to the controller new and vice versa. In fact, we roped in some friends who had never used Traktor before but were CDJ veterans and they got it within seconds. This kind of fluency is absolutely vital when it comes to performance controllers, and is definitely the strongest advantage the T1 has over NI's S4.

Speaking of the S4, we think it's fair to say, despite Pioneer's claims that the T1 is for home use, a lot of potential buyers will be directly comparing the T1 and Native's flagship controller.

To cut a long story short, it really comes down to what you need. With no Sample Deck or Loop Recorder control on the T1, now available to all Traktor users through Pro 2, you're limited to Cue Points, which we'll get to later.

On the other hand, the CDJ-2000's Needle Search has found its way on to the T1, so quick searching and cueing is possible via the ribbon controller, something the S4 lacks, though it's not really a deal-breaker.

What is nifty is pressing the Function button activates five hotspots on the ribbon, which are unmapped by default but could become your Sample Deck controls or whatever you can think of.

Bundled with the DDJ-T1 is a special edition of Traktor Pro developed for and by Pioneer. It's pretty much the same as Traktor Pro LE except it includes the Record function - although Broadcast is still out of the picture.

It also allows four-deck control, unlike LE. There is an upgrade path to Pro for 120 Euro. Furthermore, if you already own Pro, installing Traktor Pioneer Edition will simply add the DDJ-T1 to the list of Pioneer controller in the controller Setup Wizard.

As we've already said, the T1 is somewhat of a hybrid of Pioneer's CDJ-350s, DJM mixer range and Traktor's features such as hot cues, effects and sync functions. In fact, the jogs are lifted straight from the 350s and feel rather plasticky and, despite being slightly bigger, don't have the torque of the S4 equivalents. There is no way you're going to be scratching on these.

There are two master outputs - phono and TRS - though they operate on a single channel. Like the S4 there is no dedicated Booth Out, though the second output can be used if you have a passive volume controller.

Another oversight is the lack of LED meter levels. Sure Traktor offers auto gain but you lose that reference and the mixer section feels less like an actual mixer and you don't need us to tell you the less you look at the screen, the better.

The familiar yellow In Out buttons controls loops and the much-loved Auto Loop has also found its way onto the T1 too. Another thing we really love about the T1 is a simple one - one knob filter with an on/off button. That button is sorely missing on the S4.

The T1 tackles Traktor's Hot Cues in a fairly tasteful manner. Switch to Hot Cue mode and the loop size adjustment and seek buttons become cues one through four. Press shift and they're five through eight.

It's simple, and it works well. That's kind of the mantra for the whole controller. It tames some of Traktor's complicated functions, presents them in a familiar format and takes away the learning curve in the process. Any DJ coming to Traktor from CDJs would do well to take a serious look at the T1.

So we come back to Pioneer's emphasis that this is aimed at the bedroom DJ market. Seeing as very few beginner or amateur DJs will buy CDJ-2000s for their homes, let alone have enough money left over to pick up Traktor Scratch Pro, it makes sense that the T1 with Traktor Pioneer Edition is the logical choice, if you're dedicated to the Pioneer range.

So what of the price? £900 is a lot of money for a beginner, especially if you need to add the price of a laptop. Then there's the size - we dissed the S4 for its large footprint, and this is even bigger - 18cm bigger to be exact.

However, Pioneer has saved space by incorporating a slot for your laptop's keyboard to rest under the controller, which is a nice idea. Although a USB slot for a mouse on the controller would have sealed the deal - we found ourselves having to lift the controller to access the trackpad more than once, though if you're prepared, it won't be an issue.

Furthermore, there's only one phono input versus the S4's two, meaning you couldn't run two CDJs or turntables alongside the T1. There is a mic input but it's switchable with the aux in so you can't run them at the same time. And while the T1 does run over USB bus power, the external ins can't be used unless the power adapter is in.

A recent announcement by NI will make your decision even more difficult. Soon the inputs on the S4 will read timecode signals. This means you can hook up two turntables or CDJs to the S4 ins, load up a timecoded CD or vinyl and control the third and fourth deck (or any combination) of Traktor.

This costs 129 Euro, comes with a pair of timecoded CDs and vinyl, upgrades your Traktor Pro 2 to Traktor Scratch Pro 2 and is available now. This means for the same price as the T1, you can get the S4 and Traktor Scratch Pro meaning you could still use CDJs in the club as a controller.

This makes the argument of familiarity a little less relevant, and future-proofs your investment even further. Something to think about.

Let's ignore the price for a second and take a look at pros and cons of the T1. The familiar user interface will go a long way to both introducing beginners to the industry-standard equipment and also linking CDJ veterans to digital DJing.

At the same time, that dedication to standards has meant some of Traktor's most unique functions being left out completely. At times, the T1 already feels out of date and at others, it feels timeless.

Again it comes back to what you want to do - if you want to sample on the fly, hook up extra audio sources, loop, scratch and generally perform while you DJ, you will feel limited by the T1. If you're playing fairly upfront House and Techno, without the need for any sampling or complex looping or triggering, the T1 will delight you in its simplicity and quality.

The only question left is, are you willing to pay £100 more for less features? Are you willing to sacrifice the extra performance options of the S4 for the benefits of immediacy and familiarity and pay more in the process?

When it comes down to it, if we could choose either of these controllers to take home for free, we'd choose the Pioneer. It's more immediate, it's simple and it's fun. But if we were parting with almost £1,000 for a controller, we'd choose the S4. It's a better investment as NI is guaranteed to continue to support it, they won't change the software so that it becomes redundant and with the upgrade path to Traktor Scratch Pro you can continue to use CDJs in the club with the S4 as your soundcard.

Pioneer has made an excellent professional controller, and has priced it accordingly. True Pioneer protégés and DJs for whom £900 is but a number will love the T1. The rest will have to carefully consider the cheaper S4 before committing.