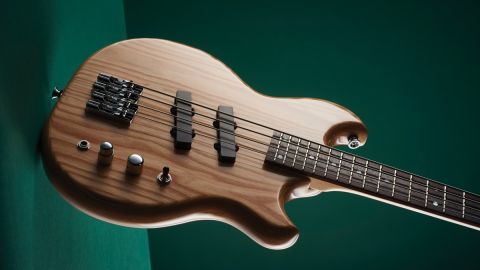 A character-rich but playable budget bass.

Scott Whitley, a bass player with Big Country and the Animals on his CV, designed and made a short-scale signature bass called the SWB-1 for some time before West Country luthier Chowny took on the manufacture.

We’ve featured Chowny products before and were impressed with the number of features the company manages to stuff into a low-pricetag bass, so when an active SWB-1 landed on our doorstep, we were keen to get stuck in.

We like affordable basses with loads of useful specification - call us old-fashioned - and working as we do in an industry where massive-bodied barn-door basses are commonplace, it’s refreshing to encounter a finger-friendly short scale. Plug and play...

For a sub-£500, Indian-made bass, the SWB-1 feels solid and precisely-engineered. Our ash-bodied instrument (mahogany is also available) looks a touch like a Gibson SG guitar, and with its 3.2 kilo weight and 30.75” scale, it isn’t actually too far removed from that particular axe in feel - at least when compared with a standard-sized bass.

The active controls differ subtly from the passive version, available for £100 less than this one: instead of a volume plus tone, we’ve got a volume plus stacked bass/treble pot. It’s all pretty intuitive. A selector switch makes things even easier.

The four-bolt neck join is basic but perfectly functional, while the neck itself is slick and finger-friendly. The bridge, to our slight surprise at this price point, is as far from the usual low-budget P-Bass unit as you can get: kudos to Whitley and Chowny for incorporating individual stringing units rather than the standard plate.

Now, this next part essentially depends on your tolerance for short-scale necks. Personally, we think the extra time you spend flipping from fret to fret on a 34” or (ouch) a 35” scale is time that you could more profitably employ on other things, so a 30.75” scale suits us fine.

Then again, our relatively introverted playing style doesn’t include eight-finger tapping or sweep-picking across 12 frets, so we don’t have to worry about hitting a given small space of fingerboard every few milliseconds. Only you will know how comfortable this neck feels for your style.

Talking of comfortableness (is that a word?), Whitley has angled the two J-style pickups so that the G string is covered nearer the neck. This, he claims, leads to a more balanced tone coverage, and he may well be right, but it doesn’t half make things tricky if you’re in the habit of resting your picking-hand thumb on a pickup.

You’ll enjoy the active EQ, which has plenty of boost at both ends. The flat tone of the SWB-1 is useful, for sure, but it’s also fairly predictable, so feel free to go to town with the stacked tone pot, both parts of which are centre-detented and thus earn maximum convenience points from us. For a relatively small-bodied bass, the low end is considerable: you’ll have no problems approximating the stomach-disturbing throb of a bigger instrument. The treble is admirable too, with glassy tones that pop away satisfyingly.

Deliver some legato runs on this neck and your fingers will reward you: it’s a highly playable chunk of maple, especially in the upper register. Slappers, too, will also be at home here, given this instrument’s eager ‘bounceback’ in response to your thumb hits.

Experiment with rolling off one of the pickups and focusing on the other: used in tandem, the tone range is fine but it’s not particularly individual, whereas one or the other reveals the instrument’s character much more clearly. This is fun: you could be here all day.

We keep returning to the fact that no matter what its virtues and vices, this bass only costs £495. Frankly, it feels like a more expensive instrument, and if you consider that a passive version also exists for £395, you have to raise a glass to Chowny, Scott Whitley and their production economics. These are good times for those of us in search of cheap bass thrills, and instruments such as this one are leading the way.