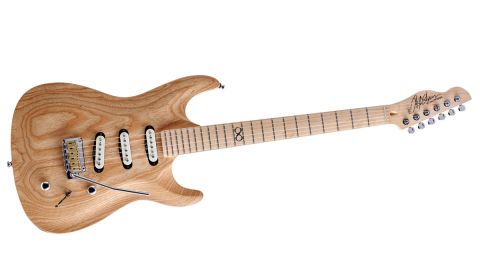 There’s a strong and welcome whiff of people power when it comes to Chapman guitars.

Brand founder, Rob (aka the Monkey Lord), isn’t a dusty tonewood tappin’ guitar maker; he’s a guitar-toting internet celebrity-cum-entrepreneur who’s gone from creating a smattering of electrics in 2009 to a full-blown range of some 29 new models.

“The culmination of 18 months worth of feedback, comments, chats and meetings with the guitar-playing public,” says Chapman Guitars’ MD, Matt Hornby.

The guitars are now available in over 20 countries worldwide. The range is split into three tiers - Standard, Pro and Signature. We selected a Pro model that starts with classic benchmarks then gives them a modernist makeover. The ML1 Pro Traditional, in this ‘naked’ ultra-thin natural satin finish, is about as raw as it gets. The light ‘swamp’ ash body (35mm deep at the rim with a maximum depth of 45.6mm) has a typical thick, wavy-grained figure that is smooth to the touch but you can certainly feel the grain.

The smooth satin back of the maple neck feels good - this whole thing feels like a custom shop construct, not a product from the Korean World Music factory that builds for numerous brands, including PRS (SE range) and certain Guild Newark St models. There’s a PRS-ish aspect to the top carve with a flatter centre than many, its thinner horns adding to the modernist vibe.

The edge radius is tight, but we have a good rib-cage cut adding to the sculptural feel, while smaller details such as the recessed back covers and washers for the four neck screws continue the classy vibe. The reversed and pointed-tipped Tele-style headstock boasts Hipshot rear-locking tuners.

The two-post vibrato is unnamed but features a sharply machined brass block with deep-drilled string anchor holes and brass saddles with what appears to be a slightly textured plating.

Simplistic, stripped-down quality applies to the electrics, too: a trio of Chapman Venus Witch single coils (with Alnico 5 rod magnets), direct mounted to the body (with height adjustment), master volume and tone, and the ubiquitous S-style five-way pickup selector with the output passing to a side-mounted socket securely fitted to its oval metal plate. Schaller-style strap locks are standard.

With such sharp, clean presentation, there’s a danger that - like many modern instruments - this could feel rather sterile. It really doesn’t.

The ML1 has just about everything going for it: a light weight, nice snappy acoustic resonance, shallow flattened C profile neck (around 20.6mm at the 1st fret, 21.7mm at the 12th) and hugely positive playability.

Despite two string trees and that reverse headstock, tuning stability from the vibrato is really good: up-bend is limited to around one tone on the G string; down is virtually to slack.

All the controls fall easily under your hand - they look a little cramped, but in use are intuitive and fast, while the Tele-style knurled knobs are very grippable, not least for pulling up the tone switch to voice the pickups’ split coils.

It’s these tuned-in features that makes this model seem more like an artist-designed guitar, which in reality it is.

Irrespective of the design tweaks, plugged in, the ML1 is a ‘Strat’ through and through. And if you prefer yours on the brighter side, dry, crisp and resonant, then you’ve hit pay dirt.

While many of us might wrestle with a big ol’ 50s-style neck, heavy strings and big actions, this is the antithesis - it’s a fast player with a sensible ’board radius that doesn’t fret out and the neck feels as comfortable for thumb-around as it does with thumb-behind.

It almost has an active ‘edge’ to the crisp highs, which can easily be tamed by the master tone: it’s springy and funky, does a great Edge or equally Nile Rodgers studio-Strat. If you asked players what they don’t like about a Strat, this might well be the answer. It would make a superb platform for a pair of hot PAFs, too.

Helped by direct-to-retailer pricing, this guitar offers a spec that’s hard to beat at the price - and you get a good case, too.

The ML1 Traditional is very nicely put together: a crisply voiced modern Strat-alike (though far from a clone) that’s light, lively and resonant. It’s a slinky player with obvious potential for any modders, although it’s ready to funk and rock straight from that case.