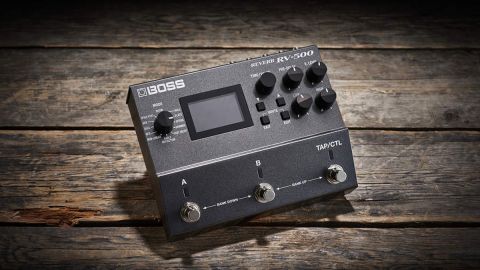 The perfect tool if you need different ambiences for different songs.

Although Boss and parent company Roland had been at the forefront of effect technology for many years, it appeared to have missed a trick by not having a direct equivalent to the large format pedals typical of Strymon’s Timeline, Big Sky and Mobius.

That all changed with the launch of the DD-500 digital delay and now they have done a similar job for reverb and modulation pedals with the RV-500 and the MD-500.

The RV-500 reverb pedal is a three-footswitch unit that’s based around stored patches. There’s a Normal setting that sees the first two footswitches recalling patches stored in banks (accessed by stepping on two footswitches together) with the third footswitch assigned to Tap Tempo or a control function within a patch like bringing the shimmer in and out or adding delay to the reverb.

There’s also real flexibility to configure them for different functions such as instant recall for three patches, stepping directly through presets or the A/B Simul mode that lets you use two presets at the same time in a series or parallel connection and mixed or split A/B output.

There are 12 selectable reverb modes with 21 reverb types between them, and each patch also has a full-function digital delay with modulation that can be used in series or parallel - even by itself if you turn the reverb level down.

Five knobs give you instant on the fly tweaking for the major parameters but there’s also a massive range of editable parameters tucked away in menus, clearly seen in the large well-lit display or accessed via the USB connection to the free editor/librarian software.

We get the classy reverbs of all varieties that Boss/Roland is capable of but they have also thrown in a Space Echo multi-head tape delay emulation for extra flexibility and an alternative to the delays with the reverbs. With all of that there’s a massive amount of variation available, especially in A/B Simul mode where you can effectively have two reverbs and two delays combined, or have the onstage practicality of reverb on one footswitch and delay on the other.

There’s plenty to be explored in this immensely practical pedal that brings reverb and delay together. With all that memory and the various footswitching options it’s the perfect tool if you need different ambiences for different songs.