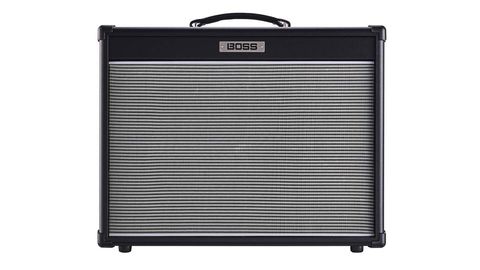 This Nextone is certainly worth a look.

Tech giant Roland has been particularly active on the guitar front in recent years, scoring major successes with the popular Katana series of digital modelling amps and the boutique-killer Waza Craft heads - its first amplifier products to use the Boss brand.

The Katanas run side by side with the rejuvenated Roland-badged Blues Cube range, which uses Roland’s clever Tube Logic technology, blending digitally-controlled analogue circuits and digital effects to emulate the sound and response of old-school ‘tweed’ valve circuits. Now, there’s a new Boss amp range that takes Tube Logic to the next level, the appropriately named Nextone series, which currently includes the Nextone Artist and Stage combos; we’re auditioning the Artist here.

The Nextone amp is smartly presented in black-vinyl-clad ply cabinet, with a distinctive speaker grille cloth and a ‘Boss’ emblem. The Nextone Artist delivers 80 watts into a slightly larger cabinet with a more robust carry handle in comparison to the Stage version. As you’d expect, the electronics are PCB based and, with no big components to support, the whole assembly looks tough enough to stand up to regular gigging.

The Nextone has a reassuringly normal-looking control panel, with clean and lead channels sharing a regular bass, mid and treble EQ network. The master section is where things get more interesting: alongside presence and master volume knobs, there’s a Power Amp Select switch offering a choice of 6V6, 6L6, EL84 and EL34 valve emulations, together with a Power Control knob that lets you run the amp at full or half-power, 0.5 watts or standby mode for silent recording. There’s also a simple effects section with controls for delay and reverb, and button switches for boost and tone functions, the latter operating by default as a bright switch on the clean channel and a mid-boost on the lead channel. Another small switch doubles as a channel changer, but it can select an alternative custom configuration.

On the rear panel, you’ll find a headphone and recording output, a line output and effects loop send/return, sockets for footswitches and Boss’s GA-FC controller, and a USB socket that carries audio and lets you hook up the Nextone to your desktop editing app. If mentioning the words ‘editing app’ lead you to suspect there’s more under the Nextones’ hoods to play with, you’d be right.

The Nextone Editor lets you dig into a lot of extra functionality, which can be tweaked and saved either as a patch in the library, or transferred into the amp where it can be recalled from the custom switch. This can significantly change the Nextone’s character. For example, the EQ expands to four bands with fully parametric high and low mids. There are also British and American EQ types, global system EQs, compression, noise gate, three delay types (including Roland’s famous SDE-300), a tremolo and three reverb types, which can all be adjusted to taste. Other cool functions include setting the effects loop for series or parallel operation, and a choice of ‘air’ feels for the speaker-emulated line out.

The Nextone is electrically very quiet, with practically zero hiss and hum, making it an ideal partner for guitarists who spend a lot of time in the studio. The default clean sound is very pleasing, with a sweet treble and a snappy bass that’s full and rounded - quite Fender-ish in character and not too dissimilar to a ‘Silverface’ Deluxe. The lead channel’s default sound has more of a ‘tweed’ overdrive vibe going on, with a toothy, snarly distortion that responds well to pick attack, cleaning up nicely as the volume control is turned down.

While the on-amp controls are intentionally restricted, the editing app gives the Nextone practically unlimited EQ possibilities, making it easy to bend the default sounds to your own taste. The valve-emulating class AB output stage feature changes tone and response to approximate the sound of four popular output valve types: the 6V6, 6L6, EL84 and EL34. There’s more of a midrange focus for the 6V6, while the 6L6 extends treble and bass range. The EL84 has a quite compressed feel that evokes the characteristic AC30 grind with some heavy distortion, while the EL34 adds more bass and dynamic range. However, the default valve differences are quite subtle, and when the amp is cranked up they’re not so obvious, especially in a live band context. Again, the editing app can make significant changes here, including deep parameters such as bias and sag, and you can save different valve types for clean and lead.

Built-in effects are limited to delay or tremolo and reverb, with a choice of delay and reverb types ‘off-amp’ that can be tweaked in depth. The Power Control knob is useful for taming the amp’s output for home use, with a ‘standby’ mode for silent recording. At stage levels, the Nextone Artist’s 80-watt output makes a significant difference to headroom and clarity, and we’d definitely recommend this model for anyone planning to use a Nextone live, although with monitors you could use either, thanks to the effective speaker-emulated line out.

As a standalone amp, the Nextone does well compared to like-for-like competition, with the usual solid-state benefits of reliability, consistency and portability. While you can edit parameters ad infinitum to bring the Nextone’s clean and lead channels closer to your idea of sonic perfection, there’s only one preset patch on the amp - although that’s one more than the Blues Cube, and you can store as many as you want in the editing app library. You can save some parameters per channel, but others are global, including the effects.

These things may mark the Nextone down for some prospective buyers. While it isn’t a digital modelling amp, we felt its sounds weren’t quite authentic and different enough to set it apart from some digital competitors offering more effects and patch storage, with perhaps the biggest competition coming from the Nextone’s Katana stablemates. Not everyone wants that extra complication, of course, so if you’re after an affordable solid-state amp that sounds convincingly valve-like, with in-depth programmability, the Nextones are certainly worth a look.