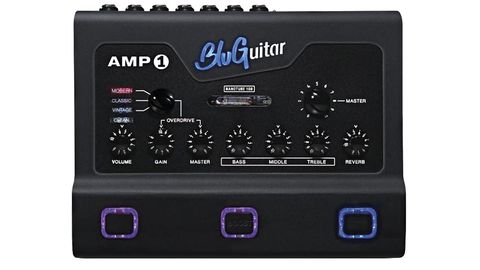 Like its siblings, the Iridium Edition is super-portable, versatile and easy to use, but it is packed with gain should you need it. This might well be the future of high-gain guitar amplification

We are living in a golden age of guitar amplifier design, in which modelling technology has presented us with a paradigm shift whereby one of the most exciting amps of this year is presented in a floor-based format that’s the size of a small multi-effects unit.

It was the 2014 launch of the Amp1 when the name BluGuitar first entered the conversation beside manufacturers such as Line 6, Kemper and Fractal. Brands whose tech has ushered in the next generation of guitar amplifiers.

Each approached the issue differently. BluGuitar’s approach was novel, using a sub-miniature twin triode valve to drive the power section and keeping an all-analogue signal path throughout. The brains behind it is Thomas Blug, a former engineer at German amp titans Hughes & Kettner.

If the original Amp1 introduced the platform and the Mercury Edition saw its four-channels reworked to make them more versatile, the Amp1 Iridium Edition is voiced for the high-gain freaks who need some heavy-duty tones for metal and so forth. The design, matte black-on-black with blue H&K-style lighting kind of gives it away, right?

That said, there’s something for everyone here. Seriously. And, again, it is mind-blowing that a four-channel head (three dirty, one clean) comes in such a small format and is switchable by foot.

The Amp1 Iridium comes preloaded with multiple cabinet sims. You can also turn these on if you want to use your own cabinet – BluGuitar has its own line of them. The features are stacked high but the setup is simple. The control panel is not going to freak anyone out. Think of it in much the same way as you would a regular amp.

With a rugged construction, the Amp1 Iridium Edition should hold up nicely on the road. Those blue-purple LEDs make it easy to spot on a darkened stage, as does the glowing bulb of the Nanotube 100 valve that is visible through a window compartment on the front of the pedal.

It’s a reassuring sight, too, and a reminder that the Amp 1 Iridium Edition has an all-analogue signal path. Only the onboard reverb is digital. There are no effects. For that you’ll need your pedalboard. Equipped a switchable parallel/series effects loop, the amp is designed to work with your effects.

The Amp1 Iridium Edition is small but remember it is a class D 100-watt amplifer and it is super-loud. There is heaps of headroom. For home practice, the Powersoak feature is a lifesaver, taking the output down to 0.15 watts.

The channels are aptly named and cover a heck of a lot of range. The Clean channel is self-explanatory. So too the Vintage channel, which sounds just like that, clean enough when picking softly but dig in for lots of warm, throaty breakup that’s ideal for whatever unruly late-‘60s rock styles you want to play.

Classic dials things up a notch. We’re in the ‘80s, hot-rodded Marshalls, Judas Priest, Maiden, thick and sparkling crunch. The clarity is impressive. And then you’ve got the Modern channel, the Iridium Edition’s USP. Here, you’ve got everything you need to play contemporary metal. Whether you want the harsh scooped tones of late-‘80s Metallica or the more mid-focussed prog chug we hear today, the note definition will blow your mind, while the onboard noise gate kills all that undesirable hiss.

• Victory VX The Kraken
One of the best metal amps around and it's under a grand.

Ultimately, the Amp1 Iridium Edition sounds and feels like a high-spec, top-line 100-watt amplifier head. That you can pick it up and throw it in your backpack on your way home from rehearsal, or run it straight to the p.a. at a gig, or straight to your DAW is game-changing.

We can talk all day about how floor amplifiers are the future or whatever, and that might well be the case. But in the here and now Blug has designed an amplifier for the player, with those little touches such as footswitchable room reverb and boost, all conspiring to make the Amp1 Iridium Edition a player’s amp – and one with devastating levels of gain, y’know, should that be your thing.

MusicRadar Verdict: The Amp1 Iridium Edition is super-portable, versatile, easy to use and packed with gain should you need it. This might well be the future of high-gain guitar amplification.