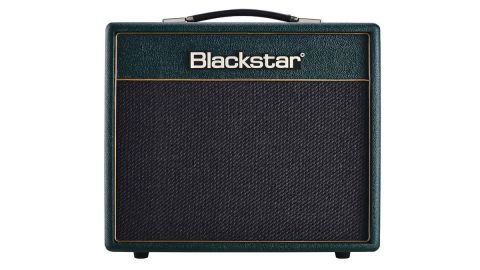 Not only for studios, but also for home, backstage and small gigs, the Studio 10s are great amps producing boutique-quality tone at a very compelling price.

It’s an open secret that some of the biggest guitar tones are often recorded on some of the smallest amplifiers, typically old ‘tweed’-type practice amps using just one output valve, in what’s called a single-ended circuit.

Single-ended amps are pure class A as opposed to output stages that use pairs of valves, typically arranged in a class AB push-pull configuration using either grid or cathode bias. In a single-ended design, the choice of output valve plays a significantly elevated role in defining tone and response, something Blackstar has capitalised on with the all-new Studio 10 amps. Unveiled at this year’s winter NAMM Show, the Studio 10 range features three 1x12 combos, each with a different output valve: the 6L6, EL34 and KT88. Today, we’re taking a close look at the KT88.

Each amp in the Studio 10 trio has different cosmetics reflecting its very different sonic character. The Studio 10 6L6 is finished in a smart cream vinyl and oxblood speaker grille cloth; the EL34 offering is covered in traditional black vinyl with a horizontal patterned salt-and- pepper grille cloth; and the KT88 model is distinguished by British racing green vinyl, with a vinyl top bar behind the Blackstar logo and a diagonal striped black grille cloth, set off by gold piping.

Behind the control panels the electronics layout is broadly similar with two high-quality printed circuit boards holding all the components including the valve sockets. All three combos have similar controls, although the circuits behind them have been individually tweaked and optimised for their respective purposes. There’s a single input jack, followed by controls for gain, tone, reverb level and a master volume, with a small button to switch on the overdrive/boost circuit.

On the bottom panel is a choice of speaker outlets, a series effects loop with a level switch, a speaker-emulated line out and a footswitch jack. The speaker choice, however, is common to all three: the superb Celestion Seventy 80 12-inch.

The KT88 model has Blackstar’s patented ISF EQ, which smoothly transforms from American to British tone as the knob is turned, emphasising mids in one direction and bass and treble in the other. The KT88 looks the business, with smart perfectly-proportioned cabinet, robust electronics and Blackstar’s usual high attention to detail.

The KT88 amp offers clean headroom combined with a juicy, harmonically rich overdrive that’s perfect for modern rock and metal. This amp’s ISF control adds extra tonal versatility, seamlessly shifting from USA to UK tonal centres. This amp has a great ‘in the room’ presence, helped by the extra bass kick that comes from the 12-inch Celestion loudspeaker. It also benefits from exceptionally low electrical noise levels, with a superb digital reverb that goes from subtle ambience to concert hall.

We tried the Studio 10 out with a variety of guitars and had great results with humbuckers and single coils. Having said that, the KT88 version has enough gain to turn even the weediest single-coil guitar into a fire-breathing monster, matched with fat, punchy cleans that easily cut through a muddy live mix.

“The overdrive circuit in the KT88 Studio 10 is based on a topology that evolved from the Series One overdrive channels,” adds Blackstar’s senior designer Paul Stevens. “The post-overdrive EQ circuit also includes the ISF control that was originally used on Series One. Versions of this gain structure and overdrive are used in the HT Venue ranges and the HT pedals, as well. However, while the Studio 10s share recognisable circuit similarities, all the products are sonically tweaked further for the precise sound we want from each specific product. We spend many hours adjusting various EQ points and the amount of gain at different frequencies, which consequently shapes the harmonic structure.”

Another cool feature  is the speaker-emulated line out, which takes its feed after the output stage, retaining the unique character of the amp’s power valve. Recordists take note: you need to use a stereo lead to plug into your desk. You can also plug in a pair of headphones and switch the amps into standby mode for silent practice. The 10-watt power rating is ideal for studio use, allowing the master volumes to be turned up to drive the output valve, though thanks to the 12-inch speaker, there’s enough power to handle rehearsals and smaller gigs, especially in bars and restaurants where space is at a premium.

While it’s great to have all the bells and whistles found on many modern guitar amps, sometimes a simple design with one great sound is all that’s needed. Find the right amp and it can take you in any musical direction. That’s the ethos behind the Studio 10 range: whichever musical genre you aspire to, there’s a good chance one of these compact, portable and immaculately finished combos will be perfect for it - and at what’s a very affordable price point, why stop at one? Not only for studios, but also for home, backstage and small gigs, the Studio 10s are great amps producing boutique-quality tone at a very compelling price.