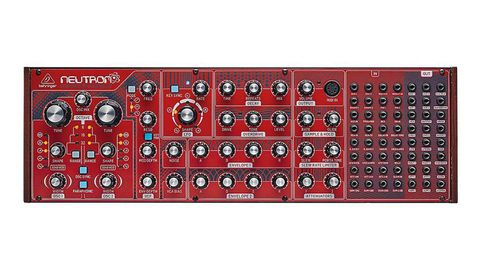 The Neutron is a fun, useful and flexible synth. Fantastic value for money, we suspect this will prove to be an immensely popular product.

A year and a half since Behringer first plunged into the analogue synthesis pool with the Deepmind 12, it is back with a (UK-designed) dual oscillator monophonic/paraphonic semi-modular synth, that can also be mounted in a Eurorack case for integration with an existing modular setup.

A year and a half is a long time for a company, like Behringer, with such a large range. In that time, there’s been much speculation arising from some of the craftily spun ‘leaks’ that announced its intention to revisit a whole host of classic synths and drum machines, and reimagine them for the 21st century. The first fruits of this were the Model D, based on the legendary Minimoog.

Of course, Behringer is no stranger to controversy when its comes to look and functionality (and its apparent resemblance to other competing products). However, like the Deepmind, the synth on review here is original in both look and feel. The Neutron’s front panel is of a distinctive red design, and appears to have been influenced (for better or worse) by synthesiser aesthetics of the 1990s. It features vintage Moog-style knobs with a 56-point mini-jack patchbay to the right.

The rear panel hosts 1/4” jack sockets for line level audio in and out, and an associated headphone output. A USB socket is included for two-way MIDI communications, though parameter values can neither be transmitted or received. The MIDI THRU on the rear can, however, be pressed into service for creating multi-unit polyphony via the Polychain feature. There is also a MIDI input on the front panel, important if you wish to mount it in a modular Eurorack system.

The Neutron features two similar oscillators based around the V3340 VCO chip. This is a recreation of the famed CEM3340 found in a host of classic synths (see boxout). Both oscillators have a similar set of controls. The Range button switches between three different octaves. The Tune control provide +/- 1 octave of adjustment, but when all the Range buttons are lit, switches to a +/- 10 octave (with both low and high extremities inaudible to anything except a sub-bass loving mouse). This mode is perfect when using the Neutron as a standalone sound-effects generator. The oscillators can generate five different wave shapes, but there is more flexibility here than is first apparent.

As you’d expect, Sine, Triangle, Sawtooth and Square (with independent Width control) are all present. However, an additional ‘Tone Mod’ setting allows you to dial in some additional, harmonically interesting, sonics. Here the Width control appears to adjust some kind of wave-shaping circuit. This isn’t quite the full picture, as the Shape control also allows you to move smoothly between adjacent wave shapes. This can even come under external control via the patchbay. Combined with oscillator Sync, a White Noise generator, and the ability to freely mix between the two sound sources, there is quite a bit of flexibility on offer. Usefully, you can also add an external audio source to the oscillator mix by plugging in to the rear panel audio input.

Once combined, all these elements are routed through the filter section. This has three primary filter modes all based around a 12dB/octave design. Fed by a simple square wave, we tested the filter in low-pass mode, and it shaped the sound in a largely satisfying way. Although a little less abrupt than most 24dB/octave designs, it provides quite a bit of bite. Turning the resonance up pushed the filter into self-oscillation which, with keyboard tracking engaged, generated a tone that was in tune across the keyboard. There is a secondary filter output on the patch bay which allows the creation of a notch filter alongside the switchable band, low and high-pass types.

As the Neutron is a semi-modular design, there is a normalised routing for the various modulation sources. In this case the LFO is routed to control filter cutoff, and a Mod Depth control in this section determines its overall strength. At fast LFO (audio) rates this creates some further interesting tones. The patchable nature of the synth comes into its own when modulating the LFO rate and depth to control the strength and tonality of these newly created side-band frequencies. Envelope 2, a straightforward ADSR, is also routed to control filter cutoff (via the Envelope Depth control). For fast to medium sweeps this works well, though it would have been nice to have longer maximum attack, decay and release times.

One issue that was particularly frustrating was the way in which even small amounts of resonance pushed the filter into saturation territory. It’s great to be able to access the dirtier side of things, but this shouldn’t be to the detriment of more conventional tones. Even with the overdrive section dialled down completely, the level from the oscillator section was hot enough to ruin the tonality of some sounds. In fact, it required routing the signal via one of the attenuators in the patchbay to bring it within a sensible range. A dedicated level control for each oscillator would have been beneficial here.

Synthesiser ICS and the 3340 VCO chip

In the later half of the 1970s, synthesisers began employing integrated circuits (ICs/chips) as a replacement for circuits employing a larger number of discrete components. As well as offering cost savings, these chips allowed for better stability and improved calibration and control. However, while some only rate a synth using fully discrete circuitry, these early ICs have become revered in their own right.

One great example of this is the CEM3340. Originally produced by Curtis Electromusic, they are back in production today. To complicate things further, there are a number of modern clones that take advantage of the fact that the original Doug Curtis design is out of copyright. Music Group, Behringer’s parent company, has been making ICs through its Coolaudio subsidiary for more than 15 years, with a customer base that includes Dave Smith Instruments and Elektron. On its site you’ll find the V3340 (oscillator) and 3320 (filter) among others (including bucket brigade delay ICs). These synth chips were also used in the Oberheim OB-Xa, a clone/ tribute of which Behringer has touted as one of its future products.

As mentioned briefly above, the Neutron has a (bi-polar) LFO, and like the main oscillators, has multiple wave shapes that can be blended seamlessly from one to another. With a highest frequency of 10kHz it is capable of audio rate modulations that create the aforementioned side-band frequencies. Key Sync re-triggers the LFO cycle with each new note, and turns it into a pseudo envelope generator if required.

Our only disappointment is that there aren’t two independent LFO generators on Neutron. Perhaps we’re just being greedy, but we’re sure space could have been made by employing a smaller LFO Shape control. Having passed through the VCF, the signal enters the overdrive section which adds variable amounts of distortion. The manual states that the tone control shapes the sound of the overdrive, but this tilt-style EQ/filter also affects the signal with overdrive at its minimum setting, which makes it useful for general tone-tweaking duties.

After this section’s level control, the audio proceeds into a VCA controlled by Envelope 1 (another four-stage affair), and then into an analogue delay section. This employs a ‘new’ old-style chip using a series of capacitor elements in so-called Bucket Brigade configuration (with 8192 stages). Delay lines such as this are exemplified by a somewhat noisy, lo-fi sound - and this one is no exception, with character trumping fidelity at lower delay times and with the feedback (Repeats) pushed to the max. This is a great addition to the synth, putting dubby squelches, Italian retro horror sound effects, and modulation treatments such as chorus and flanging within easy grasp.

However, there was one significant problem on the review unit. Even with the mix control twisted firmly to its minimum, the delay output could be heard bleeding into the dry signal path. Hopefully this will not be a problem on full production units. That takes care of most elements in the audio signal path, though there are a few extras in terms of control parameters. It’s nice to have a dedicated Sample & Hold section (for creating random stepped modulations), and two Slew Rate Limiters. These slow down the rate of change of any incoming control signals, and the Neutron has two onboard.

One is dedicated to portamento sliding of legato notes, and the other can be applied to any signal via the patchbay. Two signal attenuators are another nice addition. By default, the LFO is routed through Attenuator 2 and then on to the pulse width of each oscillator. However, the attenuators would benefit from greater resolution at the lower end of their travel range (like when fine tuning vibrato).

The final, and extremely significant, piece of the Neutron equation is the patchbay. This isn’t some cursory nod to modularisation, but an extremely useful addition to a capable synth. In fact, it goes quite a way beyond most of its competitors in terms of the sheer number of patch points. This makes it an ideal tool to get the hang of the ways in which user patching can be harnessed in the pursuit of original and engaging sounds. The Neutron has its flaws, and there are some frustrating design issues.

However, it does sound good, and in terms of bang-for-your-buck, it’s quite a steal. While it does a very good job at creating more sensible sounds, it also excels at the weird and wonderful. Initially, we tested it on its own, and had a lot of fun without a keyboard or MIDI cable in sight. Behringer might just have a winner on its hands.