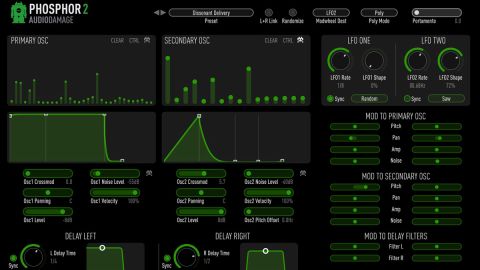 More than the sum of its parts, Phosphor 2 provides old-school tones, textures and FX with a keenly modern edge.

The relatively minor changes made include the under-the-hood engine improvements, expanded compatibility (AAX and VST3), full graphical overhaul and new XML-based preset system that are being systematically rolled out across the whole AD range, and while those alone make the $10 upgrade price a no-brainer, there are a couple of actual ‘new features’, too.

As it’s been six years since our review of the original Phosphor, we’re going to reassess it here in full rather than just appraise it as an update.

Like the alphaSyntauri, Phosphor 2 (VST/AU/AAX, and separately-available, identical £4.99 iPad app/AU plugin) is, by today’s (and, indeed, 2011’s) standards, a very simple instrument that makes additive synthesis about as approachable as it gets.

It’s a two-oscillator synth, each oscillator outputting a wavetable made up of a series of sine waves at multiples of the fundamental frequency - ie, partials or harmonics. The levels of the individual partials are set using the bank of vertical sliders in the Primary and Secondary Oscillator panels, with the leftmost slider setting the volume of the fundamental and the rest dialling in increasingly high-frequency harmonics, enabling effortlessly creative signal shaping - albeit without the handy real-time waveform that sat behind the sliders in v1, which has been ditched.

It’s in the Partials Editor that Phosphor 2’s two biggest functional improvements have been made. True to the alphaSyntauri, Phosphor v1 only offered 16 partials, but now each oscillator includes a menu-selected choice of 16, 32 or 64 of the blighters, extending the harmonic range upwards massively.

The same menu also gives instant access to two oscillator randomising options (all partials, or a third of them with the rest set to 0) and a set of preset partial configurations that mimic analogue waveforms: saw, triangle and square. All good stuff.

One of Phosphor 2’s most powerful sound design features - and certainly not possible with the alphaSyntauri - is the ability to dial in frequency modulation of each oscillator by the other with the Osc1 and Osc2 Crossmod sliders.

This opens up a further avenue of complex, clangorous and aggressive tones - endlessly useful for leads, pads, bells, percussives, FX and more; and with the modulation signal tapped post envelope and pre Level slider, either oscillator can be dedicated to serving as a dynamically flexible silent FM modulator.

Mod is in the details

Phosphor 2’s modulation system comprises a pair of LFOs, each hardwired to the Pitch, Pan, Amp and Noise levels of both oscillators, and the centre frequencies of the Left and Right Delay Filters. The modulation depths for each and every one of the 20 assignments are adjusted independently via the two columns of bipolar sliders, and by pulling target parameters around with both LFOs at once, all manner of interesting and highly irregular movements can be achieved.

The LFOs themselves run from 0.01-14Hz, host-synced or free-running, and their four waveforms (Saw, Pulse, Sine and Random) are skewed and warped with the LFO Shape knobs. The Saw wave transitions from a saw at 0% through a triangle at 50% to a ramp at 100%; the Pulse morphs from extremely narrow through square to extremely wide; the Sine wave develops an increasingly pronounced ‘kink’ in its up or down phase; and the movement between values generated by the Random setting go from fully stepped at 0% to smoothly interpolated at 100%.

The overall depths of either or both LFOs can also be tied to the mod wheel MIDI controller in the Modwheel Dest menu at the top of the GUI.

Wrapping up the oscillators, the Noise Level sliders introduce white noise to their outputs, the Panning sliders move them left and right in the stereo field, the Velocity sliders determine their velocity sensitivity; and Osc2’s Pitch Offset slider applies up to 10Hz of upward shift to it for a touch of discordance and/or further FM craziness. Finally, the little ‘Space Invaders’ buttons turn on Vintage mode, working in aliasing and degradation in order to faithfully capture the dirt and grit of the real alphaSyntauri.

Phosphor 2’s oscillators don’t feed directly into a discrete filter, the idea being to control their frequency content using the partial sliders. However, at the end of the signal path sits a stereo delay module, featuring separate combination high-pass/low-pass filters (graphically edited as width-adjustable band- pass filters) for the Left and Right channels.

With up to two seconds of synced or unsynced delay time, and both feedback and cross feedback circuits onboard, this powerful processor can be put to good use for everything from basic filtered echoes and spatialising treatments to intense feedback loops and dubby manipulations, and plays a huge part in the synth’s sound design workflow.

Like the curious system it aims to recreate, Phosphor 2 is a synth unto itself - there’s nothing else quite like it. Remarkably, it manages to make its seemingly limited range of editable parameters and modulators feel like a benefit, coming across as tightly focused on its own idiosyncratic modus operandi rather than in any way inadequate, and being supremely easy and fun to program.

Most importantly, the sounds it makes are absolutely stunning, particularly when it comes to leads, pads, chiptune-style noises and FX; and although we wouldn’t have minded a few more presets (there are just 55, all told), the gently guided Randomize function serves as a constantly reliable source of instant inspiration.

If you’ve already got Phosphor in your locker, the upgrade is well worth the asking price. And if you’re yet to experience the delights of this quirky, individualistic, brilliant and bargain-priced electronic instrument, we recommend getting hold of it every bit as enthusiastically today as we did the first time round.