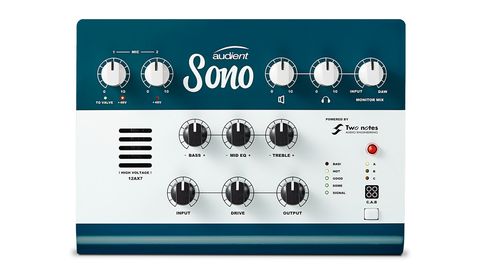 The Sono is a one-stop shop for recording guitarists in any scenario.

The idea of recording our guitars in an easier, better-sounding and therefore more enjoyable way is not a new challenge, and companies have been keen to take it on, with varying degrees of success.

UK mixing console and interface expert Audient has teamed with cab emulation expert Two Notes for Sono, an interface that’s not just aimed squarely at guitarists, but offers potential use for players away from recording too. And some of the credit due for that belongs to its valve preamp.

Peer through the grill of Sono’s stylish metal housing and you’ll spy a full-voltage 12AX7 valve waiting to be fired up for action. You can dial in analogue warmth for your tones with the gain control; either solo or alongside your own pedals. An onboard three-band EQ on the Sono furthers the tactile ‘amp’ feel.

Then there’s the Two Notes side of the package... The company’s Torpedo software is included with 20 cab models included (more can be purchased if you wish) and it’s more than enough to get lower gain classic rock and blues tones. The Torpedo interface is user- friendly and streamlined for speed and ease in tone dialling; pick a virtual recording space from studios to live venues and even a crypt, select the balance between modern and vintage, while dialling in the required reverb through adjustable mic distance.

Cabs on offer include Marshall-flavoured stacks and a Roland Jazz Chorus-esque 2x12, plus there are some bass models too. It’s important to remember that Torpedo is modelling the cab and power amp side of these amps though, not the preamp.

We found there’s an amp-like response here; okay that’s unsurprising perhaps considering that Sono is a preamp, and it allows your guitar’s character clarity with chime and spank to come through without latency (because it’s processing within the hardware and not your computer).

The downside is your signal can get a little noisy through headphones. And you’re going to need a pedal in the mix for high gain action though, but this isn’t trying to be an all tones to all players deal. Treat the hardware as a pedal platform amp an it’s about flexibility, and that includes a re-amp output and valve vocal preamp recording with the two Audient mic pres. You can also store three favourite cabs as presets on Sono to call up as a portable amp for sessions or home practice without the computer involved, though onboard reverb would have been welcome.

Based on our testing we feel there’s a lot of usability for players here that goes beyond interface territory, and the price reflects that. But most importantly, Sono enables you to dial in a good sound for recording quickly.