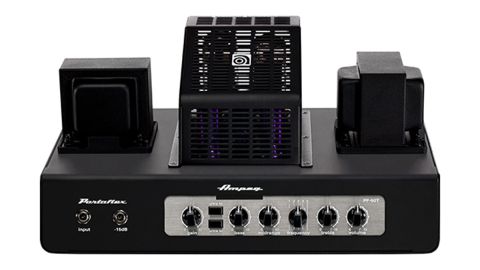 These heads and this cab are a fantastic combination for fat earthy tones.

As you expect from Ampeg, these Portaflex heads look and feel like well-crafted solid pieces of kit, but the PF series, as the name suggests, is also small and portable for easy transportation by hand.

Admittedly you’d struggle to tuck any of it under one arm and stroll to rehearsal, but these units are plenty light enough to manhandle on your own. As with all Ampeg products, they’re built to last, in this case designed in the USA but manufactured in China, featuring a stainless steel chassis, and a solid steel grille protecting the tubes. If there’s ever a World War III, the only things left will be cockroaches and Ampegs.

The design is definitely an acquired taste, with the heads squatting on top of your speaker like a spider about to strike, but look on the bright side - at least it stops the singer putting his pint on top of your amp head.

Turn it on to warm the tubes up, and a red LED glows threateningly from the front display, in anticipation of the low end hoedown heading your way. When you turn it to stand-by, it morphs to that lovely electric Ampeg purple that means it’s ‘open a can of whoop-ass’ time. Easily excited, moi? Mais oui!

The control panels are unfussy and simple to use, with a three-band EQ for the PF-20T - bass, middle and treble, with gain and master volume controls. The PF-50T benefits from the addition of a five-way mid-control tone switch and -15 dB padded input for active instruments. Whichever model you opt for, it’s safe to say that if you’ve used an Ampeg rig before, it will take you all of 10 seconds to dial in your preferred tone.

Sonically this is classic all-tube Ampeg, pumping out just the sort of warm fat tones you would expect from such a beast. Even with all the EQ controls at 12 o’clock, and your guitar tone set neutrally, the PF-20T sounds great straight out of the box. When you back off the mids and push the treble, you easily achieve a twangy scooped sound that is just perfect for slap. Or, if rock and metal are your thang, just crank all three EQ controls, and it’s positively growling at you.

The PF-50T also boasts ultra-hi and ultra-lo boosts, which really do kick in the snarl, and once you’ve used them, you don’t want to not use them, which gives the 50T a distinct edge over the 20T for players who prefer it heavy and dirty. That mid-tone switch is surprisingly subtle but opens up the tone range even further.

While the PF-20T sounds exceptionally powerful when played on its own, when you introduce a live drummer and guitarist, there’s no way it can hold its own volume-wise without being miked or DI’d. The PF-50T, which is less than an inch wider and two kilos heavier than the PF-20T, has much more oomph, but even that struggles to compete in a rehearsal room with a hard-hitting drummer and no PA support.

Where these heads really come into their own then is recording, especially as the balanced lines out (either from the pre-amp or transformer - or both) don’t need the head to be connected to a speaker, which is perfect for home recording where it’s not usually appropriate to let rip at any real volume through a speaker.

Another endearing feature of these heads is that they retro-fit into the flip-top Portaflex 115HE and 210HE cabinets, so if you want to upgrade the solid state head you’re currently using with those cabinets, you can do so without losing that flip-top facility for transporting the head within the cabinet enclosure.

In the back, techies among you will be pleased to know that both heads have a user biasing feature, so you can re-bias them yourself following a service or changing of the tubes, which is useful if you’re inclined to do this yourself. Your cowardly reviewer prefers to leave such things to the repair shop, though... There’s also a toggle switch that lets you choose between 4 and 8 Ohms, so you can swap between cabinets of different impedance.

Let’s move onto the PF-112HLF cabinet, which is constructed from durable, lightweight poplar plywood, wrapped in black diamond Tolex, and fronted with a vintage B-15 grille. There are two handy pull-tabs for ease of removing said grille, behind which you’ll find a beefy 12” Eminence speaker with a 1” tweeter horn.

It has a side-mounted ‘dish’ style handle, which is fine for carrying it in one hand at your side, but no good at all if you’re trying to pick it up from the front with two hands. And unfortunately there’s no flip-top feature like on the 115HE and 210HE, so avoid this model if you want to flip and lock your head.

There are two input/output sockets, so the cabinet can be daisy-chained with cabs of the same impedance, and an on/off switch to activate the tweeter horn if you like your high frequencies with some extra bite. This really brings the top end to life, but started to sound uncomfortable when the rig was being driven hard.

Overall, these heads are ideal for recording and solo writing sessions, not to mention live gigs where there’s adequate monitors, but don’t move anywhere near enough air for a full band rehearsal situation without a PA for the backline. Choose your location for maximum benefit - you won’t regret it.