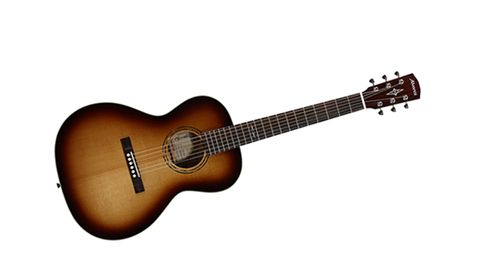 A wonderful guitar and a huge bargain.

Alvarez is a St Louis based guitar brand, which is also well known for its collaboration with K Yairi guitars in Japan, producing the outstanding Alvarez-Yairi instruments.

This instrument comes from their ‘Jazz and Blues’ collection, a series of small bodied acoustics and hollow body electric guitars launched in 2016.

This is an unabashedly pretty guitar; since we have had it in our possession, it has attracted a number of unprompted compliments. The diminutive body size, pale, almost red-tinged sunburst, and delicate abalone rosette really come together to catch the eye.

The top is the ubiquitous sitka spruce, a finely grained two-piece with an impressive amount of silking, to the extent that this almost looks like a flame top. Top and back are bound with caramel-coloured maple, and the soundhole rosette consists of twin slim concentric abalone rings; an unusual and very fetching style.

Back and sides are solid mahogany, and in a move that we can’t quite believe every manufacturer doesn’t make, there is a second strap button on the heel plate, meaning the Delta is ready to be slung on a strap and used on stage.

Alvarez doesn’t specify the bridge material; you might imagine rosewood, but given the new CITES regulations, and the relatively pale colour of the bridge, we’re less than certain. The saddle, however, is a real bone, compensated item, matched by a bone nut at the other end of the 24” scale.

The neck itself is mahogany in a very soft V profile, with a rosewood fingerboard carrying the 20 fairly skinny vintage style frets, and no position markers on the fingerboard apart from a swirling pattern at the 12th (dot markers are provided on the fingerboard edge, so navigation is no problem).

The simple headstock has a rosewood faceplate with an inlaid Alvarez script, and an attractive inlay that’s part spearhead, part shamrock. The tuners are good quality open back units and work very smoothly.

The OO is designed to look acoustic only, but there is an undersaddle pickup here, an LR Baggs VTC unit, with the preamp built into the endpin jack, and the controls secreted just inside the soundhole. You trade off the functionality of a fully-loaded head unit with tuner and multi band EQ to maintain the vintage look of the instrument, but the battery position, on the back inside the upper bout, will mean battery changes are impossible without string removal.

For this instrument, and any where avoiding obviously modern accoutrements is a priority, it feels like the right choice. For the street price of just over £500, this guitar is fantastic value; Alvarez has stinted nowhere, and things like the bone nut and saddle and maple binding are real standout features at this price point.

Pick the guitar up, and the positive impressions only increase; we seem to be having a rash of really great new parlours on the market, and this is no exception. Picking it up, it’s as dinky and accessible as you would imagine.

Don’t let the description of the neck profile leave you expecting a chunky vintage baseball bat of a neck: the profile is in fact slim, and the V is very soft indeed - just about detectable at the nut, not really at all once you go further up. Compared to the Epiphone Olympic archtop we had on hand, the amount of wood was minimal, which is almost a shame: a bit more of a chunky hard V would have been very welcome.

It’s nevertheless a very playable neck and combines well with the short scale to make stretches and leaps much more attainable, though the action could stand to be a little lower.

Tonally, it’s everything you would hope for: bright, shimmering highs, balanced by a relatively warm middle and bass end. The highs twinkle and sustain really nicely, cutting through well if you push hard, but at their best, played with restraint and subtlety.

The mid and low end are impressively powerful for such a small body; not in dreadnought territory, naturally, but absolutely neither boxy nor muted, which given the combination of short scale and small body is no mean feat.

The mahogany seems to impart a warmth to these, which chimes well with the ringing top end, and makes for a very balanced tone. The Alvarez lends itself very well to fingerstyle, the shorter scale and corresponding lower string tension making the dance of the fingers just that little bit easier than on a larger guitar, and the wonderful tone really sings out when played this way.

Strummed with a fingertip or nail, the projection and clarity of the tone are impressive, and all the more so with a plectrum. We really dug in, and gave the little box a hard workout, but no matter what, we were unable to induce any boxiness or uncontrolled aspect to the tone. Played really hard this way, the clarity started to ebb away a bit; it’s not a big strummer in the way that a large bodied guitar might be, but it rewards restraint with the plectrum with a wonderfully ringing tone and excellent note separation.

Plug it in, and the results are pretty satisfying; full disclosure, we’re about ready to ditch pickups and move to a condenser mic in frustration at not getting the tone we hear acoustically coming through the PA. With that in mind, this is a pretty decent piezo system; it’s punchier than the guitar’s acoustic tone, which takes the edge off some of the sweetness, but it sounds like the same guitar.

A volume and tone is all electric guitarists have had to play with for years, and while we missed the convenience of an onboard tuner, and might occasionally cry out for a notch filter or phase switch, the system here works fine, keeps the weight down, and is certainly more aesthetically pleasing to those of us on the luddite end of the scale.

This guitar is excellent value whichever way you look at it. A street price of just over £500 for all solid woods is pretty keen anyway, and once you factor in the bone nut and saddle, nice fit and finish and great looks, it’s a killer deal.

Let us never forget, though, that we buy guitars for the tone not the spec, and here too the Alvarez is a winner, and it combines all the features to be a great kitchen table guitar and a great stage guitar.

If you are a regular reader, you’ll know we had another low budget cracker of a parlour recently, and this has the potential to be even better. If you’re looking for an all solid parlour, don’t buy until you try this, because it’s comparable with instruments of three or more times the price.