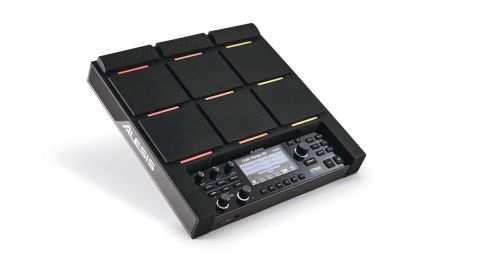 The Strike MultiPad comes with a huge memory and an enormous number of samples out of the box. It’s a joy to play and the customisable LED lights are a masterstroke.

Following on from the SamplePad 4 and SamplePad Pro, Alesis’ new MultiPad shares its title with the company’s flagship Strike and Strike Pro e-kits.

This completely reworked machine is crammed with new features and promises to rival the industry standard alternatives from Roland and Yamaha.

The MultiPad features nine velocity sensitive rubber pads - six large (105x93mm) pads and three shorter (105x32mm) shoulder pads. Situated below each one is a narrow LED light that can be programmed to do some rather clever things, but more on that later...

Controls are housed in a large panel at the bottom of the unit, accompanied by a substantial 4.3" colour display. Two A-Link dials to the left of the screen are customisable to control pad volumes, panning and FX parameters for quick adjustments on-the-fly. Six buttons beneath the screen are used to select various menu items whilst a main rotary dial to the right handles scrolling duties. The black rubber sheathing of the playing surfaces extends across the squared body, which offers added durability for a life on the road. The screen is protected beneath a thick layer of rigid plastic that covers the entire control section.

The MultiPad has a massive 32GB of in-built memory, which should be more than enough to handle the sampling needs of most players. There are 30 preset kits and space for 70 user kits with over 8,000 onboard samples ready to go. To put those stats into perspective, they only use around 6GB of the unit’s overall memory.

An inbuilt sampling tool allows direct recording via stereo jack inputs on the back of the module. The MultiPad also functions as a 2-in, 2-out audio interface that allows sound to be captured using the USB audio. Existing samples can be imported from flash memory using the USB input or transferred directly from a computer.

Unfortunately, there isn’t yet any accompanying software, so each sample needs to be assigned manually from within the unit. For those who prefer creating samples in a desktop setting, Alesis have also bundled Pro Tools First and Ableton Live Lite, which should come in useful for unlocking the machine’s MIDI capabilities. Other features include an onboard looper function, a powerful multi-FX engine, USB and 5-pin MIDI, ¼" and mini-jack headphone outs on the front of the module, stereo master and routable aux outputs, inputs for four (including hi-hat control) external triggers and four foot controllers.

Despite an abundance of advanced features, the MultiPad’s user-friendly interface and fantastic selection of kit presets makes it a joy to play straight out of the box. With a combination of quality drum samples and addictively enjoyable melodic instruments, our highlights include the Vangelis-inspired atmospheric synths of the Knife Jogger kit and the aggressive drum and bass loops of Ham And Beans.

Navigating the menus does take a bit of getting used to but ultimately they are laid out in a logical fashion under kit, pad, sound and utility buttons. When delving into the inbuilt samples it becomes apparent that the 30-kit presets barely scratch the surface of the 8,000 plus sounds onboard. Using the main control dial to select samples for each pad is a little fiddly as there is a lot of back and forth between category headings and sample lists in order to explore all the sounds on offer.

A killer feature that the MultiPad offers is the ability to assign two separate samples to one pad, triggered by a chosen velocity. This can be used to great effect to switch between an open and closed hi-hat sound or different snare sounds, dependant on how hard a pad is struck. The looper function is a welcome addition and offers the ability to layer compositions in up to 16 bar sequences, which can themselves be saved directly to the user samples bank.

Probably the most intriguing attribute of the MultiPad is the customisable RGB lights that sit directly below each of the nine pads. These can be individually programmed to any colour and set to react differently, reflecting what is assigned to each pad. This allows, for example, the categorisation of different samples types, ie blue for kicks, yellow for snares, white for loops and so on. Colours can also be altered depending on whether a sample is playing or not - perhaps red when off or green when on. This functionality becomes even more useful when using loops as the LED strips can flash the tempo of the loop, even when it’s not running. It can also act as a volume meter or display how far the sample has elapsed.

From a live performance perspective, the lights also increase visibility in a dark stage environment and in performance mode the name of each sample is displayed on the colour screen directly below - an absolute blessing for those prone to forgetting what’s what whilst feeling the pressure of an audience.