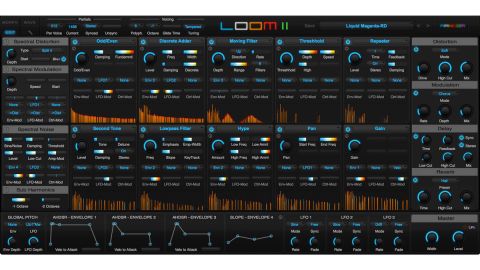 Despite some niggles, Loom II is a shiny, modern-sounding synth that excels at scintillating pads and animated textures.

We’ve not looked at AIR’s well-regarded additive synth before, but the release of version 2 presents the ideal opportunity to get it on the test bench.

Loom II (VST/AU) generates up to 512 sine waves (or partials, as they’re known in additive parlance) per voice to create tones of potentially great harmonic complexity, which are subsequently processed, modulated and morphed. The sine waves are manipulated en masse (don’t worry - you never have to deal with more than a handful individually!) to ‘emulate’ standard synthesis functions, such as filtering and modulation, and all manner of effects. Lowering the volume of all partials above a certain frequency has the exact same effect as a low-pass filter, for example.

These operations are handled in Loom II’s main Edit page - a powerful but very easy-to-use semi-modular environment, comprising ten serially arranged slots, into each of which one of 37 partial-processing modules is loaded. The modules include filters, effects, sequencers, dynamic shapers and a set of core Basic devices, which turn off specific partials to conjure up immediately usable raw sounds.

Loom II introduces four new modules to what was already a well-stocked list. The Five Sines module in the Basic category kills all but the first five partials, for stripped-back, straightforward sounds. Its controls consist of volume sliders for the four partials above the fundamental.

The Hype module is a dual shelving ‘filter’, cutting or boosting the low and/or high frequencies, with adjustment of cutoff frequency and bipolar amount. Discrete Adder is a ‘targeted’ version of the regular Adder module, replacing the Key Track control with the Discrete slider, which thins out the emphasised partials for an increasingly inharmonic tone.

The most interesting of the new modules, Double Wave literally doubles up on the original vocoder-style Wave module, shaping the levels of the partials in accordance with the sonic profile of two audio files. The module slots aren’t big enough to hold the duplicated controls this involves, so a whole new panel has been added to the GUI to cater for them, plus a host of additional parameters (including Wave 1/2 Mix) and modulation assignments. Like the regular Wave module, you can only instantiate one Double Wave in a patch.

Each module features a concise array of editable controls, and can be modulated by one each of Loom II’s four envelopes, three LFOs and five standard MIDI messages - Velocity, Modwheel, Atertouch, Key and Key+Velocity. A real-time graphical representation of the partials in every module makes it easy to see keep tabs on the effect each one is having on the signal.

While Loom II’s modules work to change the levels of the partials, the three hardwired Spectral sections on the left manipulate their frequencies. Spectral Distortion draws on a library of 18 spacing algorithms to collectively mess with the partial frequency spread, while Spectral Modulation applies random per-partial LFO modulation (centred on a user-defined average rate) for cyclical frequency shifting.

New to Loom II, the Spectral Noise section mixes noise in with the synth output, using a separate bank of noise oscillators that output across the same spectrum as the partials at any given note pitch. Various filters and dynamic controls are on hand for shaping the noise, and the partial/noise mix can be modulated.

Loom II’s Morph page enables manual and automated transformation of the sound over time via a bank of macros that are automatically and “smartly” assigned to certain spectral, module- specific, effects and modulation parameters in the Edit page.

The macro knobs are grouped into Sound (Character, Complexity, Tone, etc), Dynamics (Punch, Length, Time FX), Modulation (Depth, Speed) and Master/ FX (the Mix setting for each effect, and Width) categories, and while the inability to reassign them, carried over from v1, is as frustrating as it sounds, we do at least now have a single freely assignable User macro.

A macro state snapshot can be stored for each corner of the XY morph pad below the Sound macros, and dragging the ‘puck’ around smoothly blends and transitions between them. Alternatively, you can draw a node- based playback path in Auto-Morph mode, for key-triggered automation.

The whole system is largely the same as it was in v1, but you can now store paths (a collection of preset ones is included), and path nodes snap to grid on the X axis for precise rhythmic morphing. Also, while macros in Loom II aren’t available for automation in the host DAW, the useful new offset sliders above them are.

Also new, the Sub Harmonics section simply offers a pair of additional, independently levelled sine wave oscillators at one and two octaves below the fundamental - just the thing for adding depth and weight at the low end.

At the end of the signal path sit four effects (Distortion, Modulation, Delay and Reverb) and a Master section offering stereo widening and a limiter. Previously, the effects lived in a shared panel, but now they each occupy their own space in the interface.

Loom II isn’t a revolutionary upgrade, but the new modules and features certainly make it a worthy one. The highlights are the Spectral Noise and Sub Harmonics sections, and the Double Wave module, all of which bring even more spectacle and interest to this already- spectacular and interesting synth. Spectral Noise, in particular, can’t help but have a profound effect on the sound, even at low levels, making it unfailingly gratifying.

Being an additive synth, Loom II is very clean, precise and ‘digital’; but it’s surprisingly versatile nonetheless, specialising in pads, textures and ‘sound designy’ type stuff, but also making a fine fist of basses, leads and keys. The simplicity of the modules does limit the depth of control somewhat, but we appreciate the effort to which AIR have gone in making its complicated behind-the-scenes architecture easy to use.

We do, however, wish we could freely edit all macro assignments. Also, Loom II still doesn’t include any kind of manual. Tooltips and info pop-outs for the various modules and sections give sufficient explanation to get the experienced synthesist up to speed, but there really needs to be at least a ‘get started’ guide for novices.

With its admirably straightforward modular workflow, easy morphing and impactful sound, Loom II is a fine and quietly innovative synth, the odd technical and creative brick wall aside.