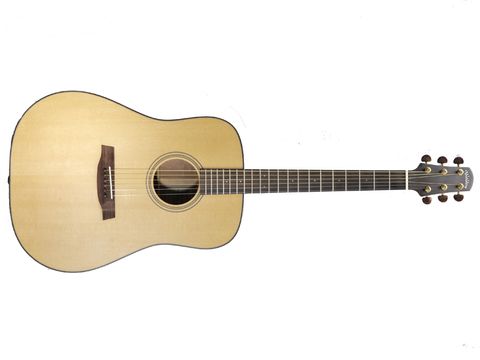 If you like an incisive, projecting dread, this one's well worth a look.

When you talk about acoustics, Walden might not be the first name to spring from the lips of the man on the street, especially in the UK, but the company has some significant firepower in its armoury.

Currently offering around 100 different models and variants in its extensive budget-to-sub-£1,000 catalogue, the brand was founded in 1996 as a collaboration between boutique US luthiers Charles Fox and Jonathan Lee, and leading Taiwan-based instrument manufacturer KHS, whose other lines include Mapex drums and Jupiter brass.

Designed in the USA (Jonathan Lee is Walden's chief designer), the guitars - focusing predominately on dreadnoughts, grand auditoriums, OMs and nylon-stringers - are made in China, in a factory that, according to Walden, is the only one in Asia with 100 per cent Pure Chain-Of-Custody certification from the Forest Stewardship Council.

This SupraNatura 2000 Series dreadnought is constructed from all-solid woods, comprising a Sitka spruce top (pre-war braced) and African mahogany back and sides.

With its close graining and rich cross-silking, the top is an especially fine looking example, and like the rest of the body is bound in rosewood with light/darkwood purfling plies.

The back and sides are stained to a deep brown, which is fair enough, but the result is fairly opaque, which tends to obscure some of the wood's patterning. The thin-coat satin nitro-cellulose is evenly applied but does feel a touch 'dusty' in places, though the similar finish up the neck is nice and smooth.

Internal tidiness is commendable, Walden ringing the changes with rosewood reinforcing strips and what look like mahogany kerfings. In place of the CG's katalox are a bridge, dot-markered fingerboard and headstock overlay of rosewood. The bridge has matching pins.

The full-scale neck is topped by another decent set of gold tuners, sporting brown pearloid buttons. It's a three-piece, bolt-on and incorporates the two-way truss rod and graphite rails. It's a slick, mainstream affair - 43mm wide at the nut and providing a regulation 55mm bridge string spacing.

The 'C' profile is shallow and fast, and the gently graduating span offers a snug grip all the way up. The only minor crib on otherwise well fitted frets, are fret tops that need more polishing. Oh, and we could add it would be nice to find a second strap button at the heel.

Tipping the scales at just under 4kg, the D2040 is noticeably light in weight for a dreadnought, something that can sometimes mean a quite explosive attack but not much beyond.

Well, the guitar has plenty of front-end guts and, perhaps helped by the resonance-friendly, light-coat nitro finish, it's far from being shy and retiring in the follow-through: in fact it's a bit of a belter.

If that's the upside; then the downside is that the tone has an unequivocally crisp presence. Though stopping short of being strident or shouty, this incisive, slightly hard timbre - admittedly partnered by a respectably firm footing in the bass and decent sustain - would benefit from more warmth and a touch of sweetness to help shed the impression of its having a largely one-dimensional sound.

Still, if that's the kind of delivery you're after - a guitar that will surely cut through - then this Walden marks that box with a big tick.

Necessarily, this review is something of a random dip into Walden's extensive range, since it recently changed UK distributor and many models aren't scheduled to arrive until later in the year.

Nevertheless, what we've looked at here inspires a good deal of confidence, quite apart from the brand's commendable commitment to sustainably sourced timbers.

Yes, the D2040's arguably tiring tone won't be everyone's cup of tea, but it's a big-hearted, easy-playing dread nonetheless and, being case-inclusive, very well priced.