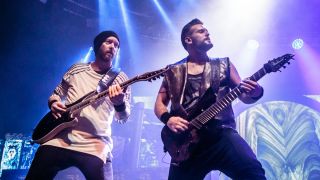 “Some players feel like they’re only good at rhythm or lead – with me, it’s more like I can’t do either,” laughs Within Temptation’s Ruud Jolie, sat backstage with fellow axeman Stefan Helleblad a few hours before showtime.

It’s a notion that every guitarist has felt at some point, if not numerous times or continually, throughout their years of playing - though in this case, the sold-out signs greeting fans at each venue would argue otherwise.

Since being formed by singer Sharon Den Adel and non-touring guitarist Robert Westerholt in 1996, the Dutch symphonic metal heavyweights have become their country’s biggest musical export, filling arenas and topping European charts with every release. Humble as they may be, there are no doubts over their skills...

“The more experienced you get, the more you can criticise yourself because you need to keep growing,” continues Jolie.

“We have our off-days too, just like anyone else. Sometimes I know it’s not going to work that night right there in the dressing room before the gig after playing just one chord!”

This year’s seventh full-length, Resist, sees the guitarists utilising the extended range of eight-string guitars to tread new sonic ground and welcoming a more modern, futuristic noise into their metallic fantasia. As we find out, it’s a transition that naturally brought along with it certain challenges...

Not many Dutch artists can say they’ve become a global force in the way you have. What’s the secret to that success?

Ruud: “That’s a good question, probably one I’m not prepared for, haha! If there was a magic formula, then I wouldn’t be able to say because it wouldn’t be a secret anymore. There are a few Dutch bands in our genre though, like Epica and Ayreon. I guess it’s a bit like wondering why there aren’t any Turkish metal bands. Belgium doesn’t have any famous bands, either! They mainly come from England, Germany, Sweden, Finland…

“I don’t know shit about politics so I can’t really go into it, but in the Netherlands if you fail within music or something creative, the government can help you out. In the United States, musicians really need to succeed in order to make a living. Maybe people work that much harder over there. There are more failures that you never hear about, but in terms of bands that succeed, more seem to come from there…”

Stefan Helleblad: “I guess some of it is down to just keeping it going. Of course, the imagery is pretty important for some people – all the hysterical vibes. There’s the science fiction vibe we took with this new album. People like that. Would Iron Maiden be as big without Eddie? Who knows, but they’d still be one of my favourite bands.”

Ruud, you also play in all-acoustic tribute Maiden UniteD. What have you learned from the likes of Adrian Smith, Dave Murray and Janick Gers?

Ruud: “Adrian and Dave are both my biggest influences, but maybe my style is a bit more similar to Adrian’s. I like his solos because he never really shows off, but when he does, it’s pretty difficult. I feel like he never really got the credit for that, though I’m sure he couldn’t care less, haha!

“His tone and vibrato sound great and everything is really musical. His leads are small compositions within the songs they live in. That’s what I aim for as a guitar player. I was probably better when I was 17 for the more technical stuff, but nowadays I want to be a musical guitar player. Someone that brings nice melodies and great tone and feel.”

Stefan: “And it’s the same for me, really. I have four favourites: Dimebag, Zakk Wylde, Angus Young and Marty Friedman. But I guess it was AC/DC that made me want to pick up the guitar, so Angus always wins for me!”

Another more unusual aspect of Within Temptation is your line-up featuring co-founding guitarist Robert Westerholt, who writes but does not tour. How does that affect bringing the songs to the stage?

Ruud: “Robert doesn’t record or play on the albums, either. It’s just us recording and arranging the guitar parts, so in that sense there isn’t much translation needed between albums and live performances. He’ll write things and then we play it, just like we would when it comes to the live show. It’s a bit different but maybe that could be the secret to our success?!”

What’s the hardest part of your current set – is there a song that requires extra attention?

Ruud: “The very first one [Raise Your Banner]! Playing that first solo on a baritone-scale eight-string is still challenging for me as it’s our first tour using them, so we’re still getting used to the really wide necks.

“I play Mayones guitars from Poland, which come without any inlays or position markers – though I did narcissistically ask for my logo around the twelfth fret. When I was rehearsing these songs at home, I was screwing up each and every time. Without any position markers on an eight-string… that was bound to end in failure, to be honest. So I had my favourite luthier back home install some in, which has really helped.

“Obviously, there are a million bands who use eight-strings out there, so it’s not impossible, but in my experience I’ve found I really have to warm up before a gig. I don’t want to sound unprofessional, but I don’t always do that and I notice the difference immediately. So I try to force myself more these days. If you don’t then the whole mindfuck will start… ‘Oh, I didn’t warm up, I’ll probably mess up this next part... oh yeah, it happened!’”

Stefan: “That is so true. As soon as your mind interferes with the playing, it’s over! I’m using Jackson guitars – plus we have a Martin acoustic, which belongs to Ruud, and a Seagull backup guitar we bought in the US, which doesn’t belong to either of us!”

What made you switch to eight-strings, then?

Stefan: “Well, we both probably prefer six-strings, to be honest. But Sharon and Robert [who write the music] came up with these songs and then everything got tuned down in Logic to go extremely low. That’s when we realised we’d need some fanned fret eight-strings to pull it off.

“For anyone out there trying to get used to them, don’t give up! Or do, and find another hobby. I decided to get the cheapest model Jackson make and it turned out to be a good guitar! Though I didn’t like the finish, so I took it all off and torched it up. It looks unique for sure...”

Ruud: “That thing came out great! Getting used to fanned frets takes a while - it’s almost like a new instrument at first. But as Stefan said, we needed to explore the lower range in the final keys for these songs.”

You recorded your new album using a Kemper Profiler instead of new amps. Is that what you are using live as well?

Ruud: “I use the Axe-Fx at home and I love it. I actually prefer it over the Kemper, but that’s what we used for the record and, now, live. All our effects are built-in and then we use a Voodoo Lab Ground Control to do all the switching. People have asked if it’s based off a MIDI track but that’s not the case, we do it ourselves. The wireless system is Sennheiser, I think...”

Stefan: “This album was the first where we didn’t use any real amps. If I remember correctly, the profile we stick with is a Naylor amp. There were a lot of presets, we went through them all and it took a whole day. That’s the good thing about it, but also the bad thing – there’s just too much to choose from!”

As well as amps offering endless amounts of gain that they never would have come with...

Ruud: “One big problem with a lot of typical metal guitar players is that they turn up their gain way too high. We really try to let the wood speak, rather than the pickups. We play pretty hard, driving the preamp – well, if there was one – and making it work harder. I don’t really want to hear the pickups of the guitar.”

Stefan: “We both use Bare Knuckle Aftermath and a Painkiller. They are really nice pickups; I’ve been searching a long time to find ones that I really like. They’re important because they affect how your gain will sound in the end and what kind of distortion you get. That’s why we both try to keep a lot of definition and not over-gain everything. It’s also how you hear if you are sloppy or not! Okay, it’s more difficult to play, but that challenge can be fun.”

Ruud: “Especially for our music, there are a lot of open chords during the choruses. You need them to sound really open; someone once described it as a single coil with the oomph of a humbucker. It’s not super-distorted or saturated.

“I also love Seymour Duncan pickups, because I have this Jackson Randy Rhoads that has a Jeff Beck and a Jazz in there, but these Bare Knuckles have this openness about them.”

What else can guitarists do to work on those right-hand rhythms and ensure they sound tight?

Stefan: “Listen to Pantera and Megadeth. Learn all those riffs and play them with your friends; that’s what I did growing up and I think it helped. If it feels too fast, then you need to slow it right down. To be honest, most guitarists will need to focus on rhythm if they want to become a professional musician. Looking around, there’s too much focus on soloing for a lot of players.”

Ruud: “For me, it was James Hetfield and Scott Ian. It wasn’t as easy to record yourself back then, but it is now, so I would say do that and keep listening back. Try to step back and listen to what you hear objectively. Are you really as tight as you think you are? Because while you play, you are having a completely different experience... you might be hearing something different to everyone else.

“Another tip is tuning your guitar just a little bit too low, so that the amplitude of the picking forces you to hit the right note. When you let the notes ring, they almost go a little flat. For example, our single The Reckoning has this riff that wouldn’t make sense to a tuner. That adds to the heaviness!”

There are many classical elements to Within Temptation’s music. Have either of you ever studied much classical?

Stefan: “I must say, I’ve never really listened to classical music let alone studied it! I just love the harmonic minor scale, that’s about it. Yngwie Malmsteen has always been a bit of an influence on me as I’m from Sweden!”

Ruud: “I studied in the Netherlands. My major was jazz guitar and my minor was classical, so I did play those Bach pieces. But it sounds too pretentious to call myself a classical guitar player because I absolutely am not… I suck at fingerpicking!”

Resist is out now via Vertigo/Spinefarm.